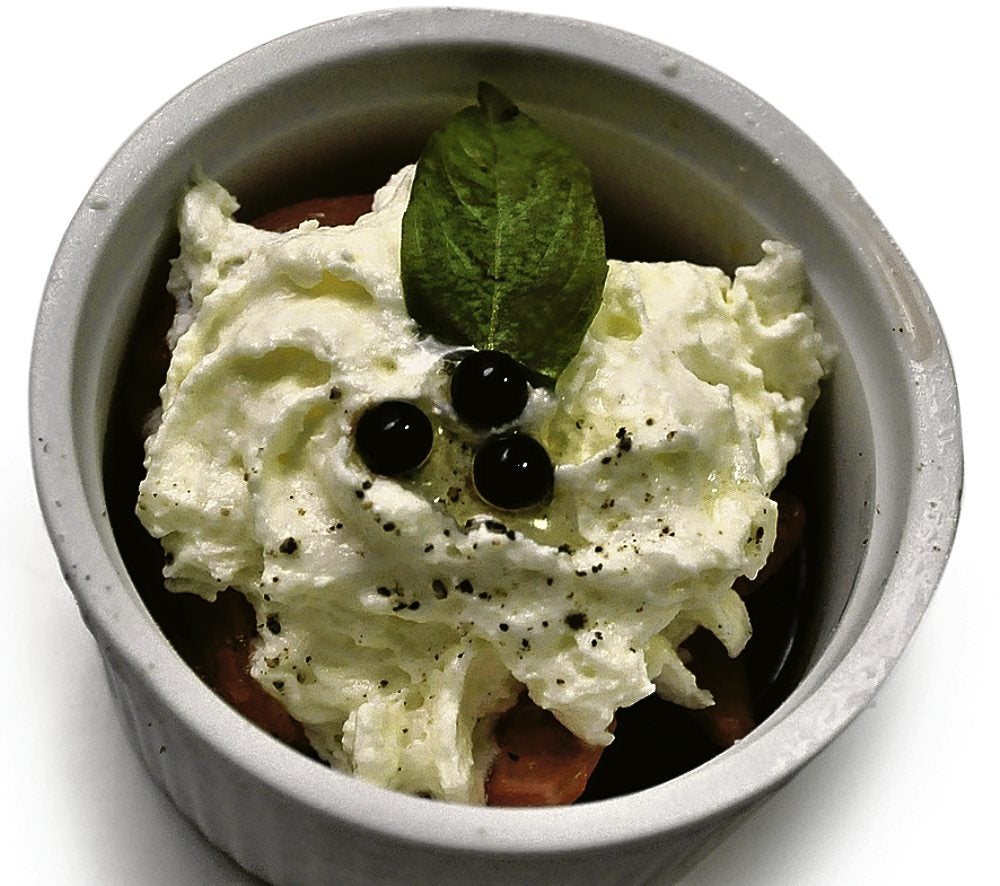 How else to celebrate the inclusion of the French Gastronomic Meal in Unesco’s Intangible Cultural Heritage of Humanity than with exactly that—a gastronomic meal. And where else to celebrate it here than at  Alliance Française de Manille (AFM) which advances French culture and language.

Paintings and historical sites are part of tangible cultural heritage. In contrast, “intangibles” can’t be touched, such as “oral traditions, performing arts, rituals and special skills to make crafts and food…”

And so that dinner was a way of affirming that, indeed, a French gastronomic  meal is part of French identity and a source of pleasure.

Three French chefs were tasked to translate the honor into dishes—Marc Aubry of Campetre, Cyrille Soenen of Brasserie Cicou and Laurent Maleval of Dessert Station, Corp. And for a short while before cocktails were served, they sat to talk about how they arrived at the menu.

They all planned together, all the chefs said, instead of assigning dishes to specific chefs. They assured that flavors would be fresh even if some ingredients were sourced from their home country, like the scallops from Britanny. The dishes would also be representative of different regions of France.

All three chefs have been living and working in the country for years and the common working experience is with InterContinental Manila at different times. Through their own restaurants and businesses, they make sure they do preserve French flavors in spite of knowing the preferences of the Filipino palate.

But for the session, they would use locally sourced ingredients as substitutes in the evening’s menu that included diwal (angel’s wings from Panay) and the eggs and capon from the Pamora farm in Abra, though the free range chickens are a breed from France.

Passed around for cocktails were beef tartare and quail egg, quiche Lorraine transformed into creamy cappuccino and poached oysters with julienne vegetables and ginger butter sauce.

With the arrival of French Ambassador Thierry Borja de Mozota and his wife, dinner began though not before the ambassador’s welcome, remarks by the working committee members—Deanna Recto-Ongpin (Alliance Française president), Stephane Doutrelant (executive director)—and a toast by Felice Prudente Sta. Maria (board director).

Traditional and modern combined in the aspic of basil and tomatoes and a foam of goat cheese taken with a dry but aromatic white Bordeaux, Chateau Bonnet 2010 Entre deux-Mers.

The next dish we were told created some problems for Bernie Sim because the poached egg was difficult to pair with wine. He zeroed in on one of France’s 10 top wines, Domaine Huet Vouvray Sec Le Mont 2006, made from a 100-percent chenin blanc with a coffee aroma. Sim had to eat the dish four times to get it right. I wouldn’t have minded because the egg with squash and truffle cream was a favorite at our table.

Scallops coated in almond and raviolis of snail ragout gave different textures and flavors that melded well and was taken with the best example of a chardonnay wine, Domaine Marc Colin Saint-Aubin en Remilly 2008.

Foie gras made its entrance as a sauce in the wild boar and mushroom tourte, the pastry so light and crisp. An arugula salad with mushroom dressing lent a light counterpoint to the rich main ingredient, but the full-bodied Chateau La Dame de Montrose 2007 was a complement.

Something from Normandy came by way of the green apple sherbet with calvados. This was also the time to relax a bit with some of the guests giving their view of the dinner. It was a demonstration of the social aspect of eating.

A roasted stuffed capon served with vegetables, red cabbage confit and chestnut puree tried desperately to be included in our almost full stomachs. It helped that a Bordeaux was taken with this, Chateau Cap de Faugeres 2007 Cotes de Castillon.

Of course there had to be French cheeses—Saint-Marcelin (runny cow’s cheese from the Rhone-Alpes region), Epoisses (soft Burgundy cheese) and Roquefort (sheep’s milk blue cheese from the south).

While we tried desperately to exclude bread to lessen the calories, we succumbed to the temptation when we smelled the lovely bread. A deep-flavored Dow’s Quinta de Bomfim 1996 accompanied the cheeses.

Chef Laurent, on seeing our half-finished dessert, commented how dishes that come before tend to make the diner too full. If I had another stomach, I would finish off  the poached pear with vanilla hazelnut mousse and caramelized tuile and the not-too-sweet dessert wine of Chateau Doisy-Daene Barsac 2004 to the last drop.

For those of us who stayed for a while digesting—apart from the dinner—the idea of an intangible cultural heritage, coffee, liqueur of Bas Armagnac Domaine Joutnaou 1974, and still more sweets were on hand— praline tart made with peanuts, truffle chocolate and pistachio macaroon.

So far, Mexico and the Mediterranean diet (Spain, Italy, Greece, Morocco) have been recognized by Unesco. Peru will be proclaimed this year. So when is our turn?