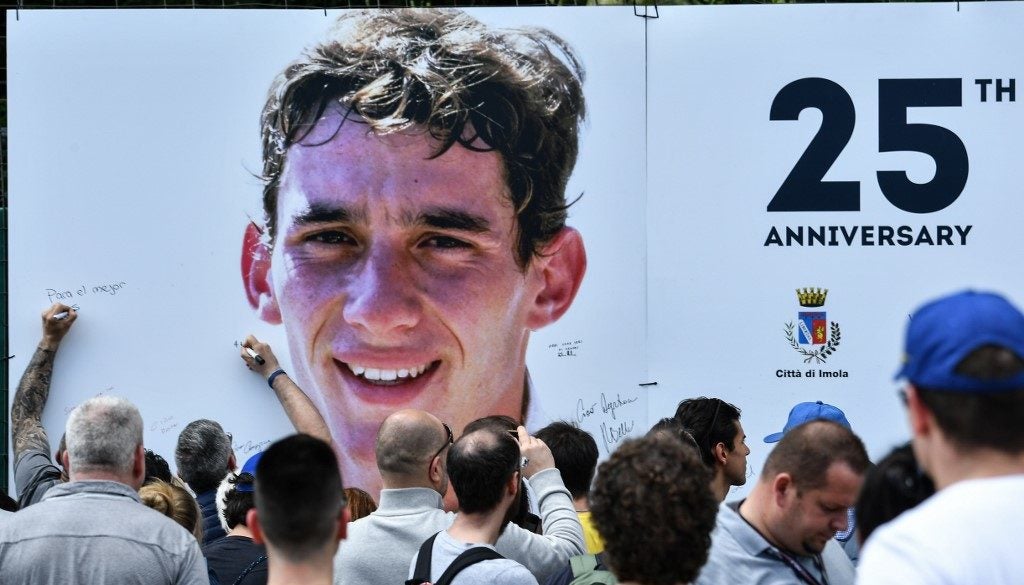 People sign a giant placard bearing a portrait of Brazilian's F1 driver Ayrton Senna on the "Tamburello" track curve of the Imola "Enzo and Dino Ferrari" circuit where Brazilian's F1 driver Ayrton Senna died during a tribute ceremony marking the 25th anniversary of his death on May 1, 1994 while taking part in the San Marino Grand Prix in Imola. (Photo by ANDREAS SOLARO / AFP)

The Interlagos racing circuit held a ‘Senna Day’ to celebrate the life of Formula One great Ayrton Senna on Wednesday to mark the 25th anniversary of the Brazilian’s death.

The event began with a fun run around the famous circuit in Sao Paulo where the three-time world champion had twice tasted victory at the Brazilian Grand Prix in front of his adoring public in 1991 and 1993.

Karting races were also on the program, as well as laps of the track in a specially commissioned super-touring McLaren, the British team with which Senna won the world title in 1988, 1990 and 1991.

“He was the example of someone who wasn’t afraid to fight to realize his dreams and who was proud of being Brazilian,” said Bianca Senna, the late racer’s niece who looks after the Ayrton Senna Institute, which is involved in education projects in socially disadvantaged areas.

Fans could admire paraphernalia from Senna’s career, as well as try out race simulators that reproduce his greatest triumphs.

“He was my biggest hero. I was 10 the day he died and still today I try to imitate his style when I’m on track,” said Marcos Vinicius Martins, a driver who took part in “Senna Day.”

It is a homage to a man who was voted Brazil’s greatest sportsman (with 47 percent of the vote) by some distance ahead of football great Pele (23 percent), in a poll conducted in his home town of Sao Paulo in 2014.

Amongst the gems from the Senna collection fans could admire karts he raced during childhood as well as racing suits, helmets and trophies from his professional career that garnered 41 GP victories.

That was a golden era for F1 when Senna’s rivalry with Frenchman Alan Prost — his team-mate at McLaren for two seasons in 1988-89 — was one of the most gripping in the sport’s history.

Prost outdid Senna by winning four world titles, including beating his team-mate in a dramatic and controversial 1989 championship battle.

Senna’s death sent a nation into mourning and sparked an outpouring of grief around the world.