To have and to hold – without going for broke | Inquirer Lifestyle ❮ ❯ 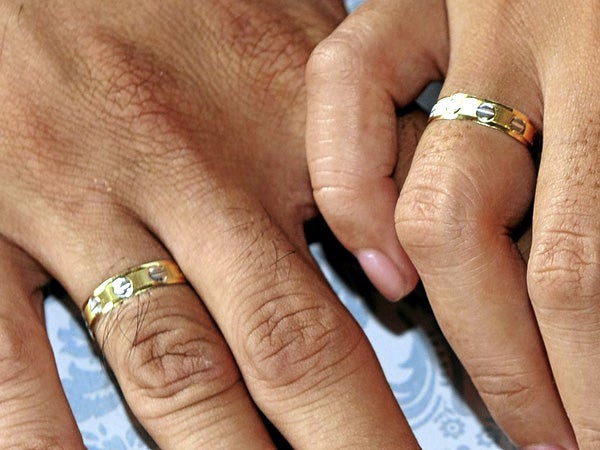 To have and to hold – without going for broke

Stripped down to basics, falling in love does not cost a centavo. As the song goes, money can’t buy you love.  Money however comes annoyingly and firmly into play when a couple decides to take the relationship to the next level and take the plunge.

Making the union legal and official does come with a price tag, what with countless expenses starting from the marriage license, the wedding rings, wedding gown, the Barong or tux, the church rental, reception, flowers, the venue, the giveaways or souvenirs, the wedding pictures… The list can go on and on.

And for most Filipinos, even those who watch their budget like a hawk, that price is simply too steep. Which is why some couples opt to take the less expensive route of simply living together without benefit of wedding vows to become common law husband and wife.

They’re a couple, yes, but not quite entitled to what the law provides legally-bound spouses, which can be quite substantial, including a higher income tax break, the ability to co-sign for a housing loan, and so on.

It’s a problem that Hitachi Global Storage Technologies Philippines Corp., which produces hard disc drive components for global sales, has recognized among its employees and decided to address head on.  A survey by the company’s human resources department revealed that many of the legally single but otherwise informally married workers in its semiconductor manufacturing facility in Laguna do want to get married. In fact, many of the women dream of walking down the aisle with their life partner, but cannot afford to spend for a church wedding with the expected reception after for one’s multitude of friends and kin.

Realizing its employees’ most common frustration, Hitachi, through its president Chandra Anamirtham, decided to sponsor a mass wedding for its interested workers on the auspicious date of November 10, 2010 (10-10-10).

A total of 104 couples took part in the mass wedding bankrolled by Hitachi, which spent for the venue, the gowns, the wedding rings and the reception that gathered friends and families together in one giant wedding party.

Chandra explained during an Asian CEO Forum that Hitachi thought it beneficial to spend for the mass wedding because it would ultimately make employees happier to work for the company.

And in the fast-paced and highly competitive semiconductor industry where labor turnover is a huge problem because of the time it takes to bring an employee up to speed in terms of global quality requirements, loyal employees have become even more valuable to a company’s bottomline.

Employees who benefited from the mass wedding are likely to become more loyal indeed, as the simple act of getting legally married automatically gives them access to government as well as company benefits provided to married couples and their children.

Conrad Artagame of the Hitachi Human Resources department explained that by becoming legally married, employees can, among other benefits, register up to four of their dependents in their company medical plan, resulting in huge savings on their medical bills.  This is on top of government tax breaks that automatically become due couples as soon as they get married.

Artagame added that the mass wedding ties well with the company culture of developing the concept of family in the workplace, as well as in its corporate social responsibility projects.

Chandra, who was named Expatriate Executive of the Year during the 2010 Asia CEO Awards, stressed that while Hitachi recognizes the need to make a difference in the community where it operates, it considers it more important to invest in programs that will make a life-changing impact “right at home,” starting with its 8,000 staff members.

The mass wedding was Hitachi’s banner project for 2010, and was followed by the ladderized education program in 2011. Discussions are still ongoing on its landmark project for 2012, but for sure, it will again involve Hitachi employees.

“The more the company gives, the more it gets back,” explained Chandra. •