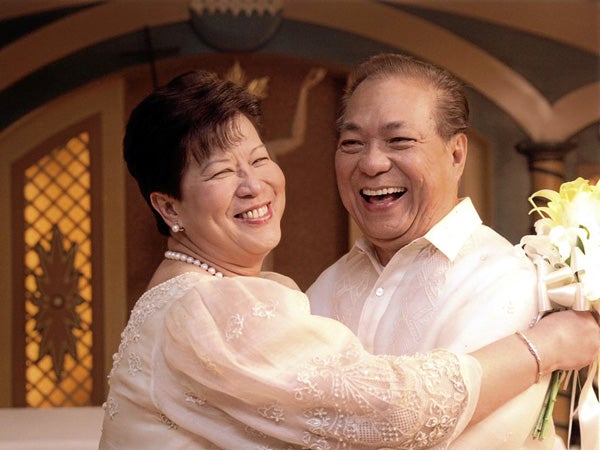 Timely advice to single ladies: Attend your high school reunion; you just might find a new love there.

That the whirlwind romance bloomed at all took De la Paz-Bernardo by surprise considering that while she and Ike were in the same class, they were not friends, hardly exchanging words in their four years together in the former provincial high school that has produced the likes of Senate Presidents Jovito Salonga and Neptali Gonzales, Senators Rene Cayetano and Rene Saguisag and National Artist Carlos “Botong” Francisco.

As she explains, students from Pasig (like Ike) and Pateros (like her) confined themselves to their own groups and did not really mingle as there was a healthy rivalry for honors between the two groups.

As it turned out, the former SSS chief graduated salutatorian while Bernardo got first honorable mention.

Other factors drew a natural divide between the two classmates. Explains De la Paz-Bernardo: “There was already a big group of Pateros students in our class so there seemed to be no need to befriend the Pasig guys.”

They also seemed to be worlds apart.  “I was second to the youngest in our class,” the recent bride recalls. “I had just turned 15 when we graduated in 1956 – and was very thin, wore pigtails and had thick glasses. I was always running and playing with other tomboyish girls when not studying my lessons.”

In contrast, “Iking, as he was called then, “was a very good-looking fellow and was the crush of many of my girlfriends. He was guwapo [handsome], very intelligent and very much a gentleman. I never dreamt I’d get married to [him]!”

De la Paz-Bernardo says that she was not really looking for a new love, having been a widow since 1995 when her husband – Wenceslao de la Paz, one of the pillars of the energy industry in the Philippines – passed away four days after their 25th wedding anniversary.

“[But Iking] just came and things happened without any special effort or planning. I myself took everything as a matter of fact,” says the newly-elected chair of the National Movement for Free Elections and honorary president of the Geneva-based International Social Security Associations (ISSA).

The young Cora and Ike went their separate ways after graduation in 1956 and did not strike a friendship until they met again during a class reunion in 2006.  Their conversation initially revolved around their mutual love for golf.

But the two Certified Public Accountants had time to nurture a friendship this time around because Bernardo by then had gone back in the Philippines for good, having retired in 2002 from his job in Jakarta.

She, meanwhile, still had her hands full at the SSS.  Yet despite her packed schedule, the two managed to play golf for about six months with other friends from high school until Bernardo’s wife – Angelina R. Pineda-Bernardo – passed away in November 2006.  He was grief stricken but he was encouraged by Cora and other friends to go back to golf as part of his long healing process.

From golf games, the meetings between the former high school classmates later included concerts and quiet dinners.  She eventually noticed that he would come around to pick her up without their third classmate.  But even then, she did not think that there was anything to it except a friendship that both needed at that time in their lives.

Then the friendship quickly developed into something else and after only a few months, the two decided, quietly and without fanfare, to get married. There were only 10 people at the wedding ceremony, including the happy couple and Fr. Aris Sison, the officiating priest.

Recounts De la Paz-Bernardo:  “Ike’s second son was the best man, sponsor and reader. My youngest sister was matron of honor and sponsor, and her 23-year-old son was the ring bearer. Everything was hurriedly put together and friends only learned about our wedding weeks after it happened.”

She continues:  “I really don’t know when we fell in love. We were comfortable with each other. We just decided to get married without fanfare. No parents had to be consulted or get permission from; they’ve all gone to a better world. We both had good first marriages so we didn’t have qualms about possible failures. Our children gave us their blessings and our siblings were happy for us to have found lifetime companions.”

But as her way of honoring her first husband, she decided to keep his name, such that she is now known as Corazon de la Paz-Bernardo. She still has the picture of Pat and their daughter, Cristina, as screensaver on her mobile phone and their other pictures in the home that she now shares with Bernardo in Rockwell Center.

She says she feels honored and proud to carry both names of “two very fine men.”

“They are two different people but in many ways, they are the same. They are both very good guys – kind, respectful, tender, responsible, quiet, gentle and caring. They are also good family men who believe in God and practice what they preach,” she cites.

She adds: “Of course, both love me unconditionally. They accept me for what I am – warts and all. I also learn from them. How can you not love them in return?

“I am so lucky to have found two very loving persons. They both have integrity and are respected by their peers. I have remained young looking because of them. Walang problema,” says the 71-year-old executive.

The couple has been married for a little over four years and she says it has been “a great journey.”

“We provide friendship and companionship to each other. We’ve traveled extensively as Pat and I did before. Ike and I have cruised together in the Mediterranean, the Black Sea, Norway and all the way up to the Arctic Circle. We’ve been to several countries in Africa and joined safaris in Tanzania and South Africa. In May, we plan on going to Spain for a few weeks with my eldest sister,” she says.

“In our twilight years, we hope to remain relatively healthy and enjoy being with our children and grandchildren,” says De la Paz-Bernardo, adding that she has no doubt that nobody could be happier for them than their former spouses. •