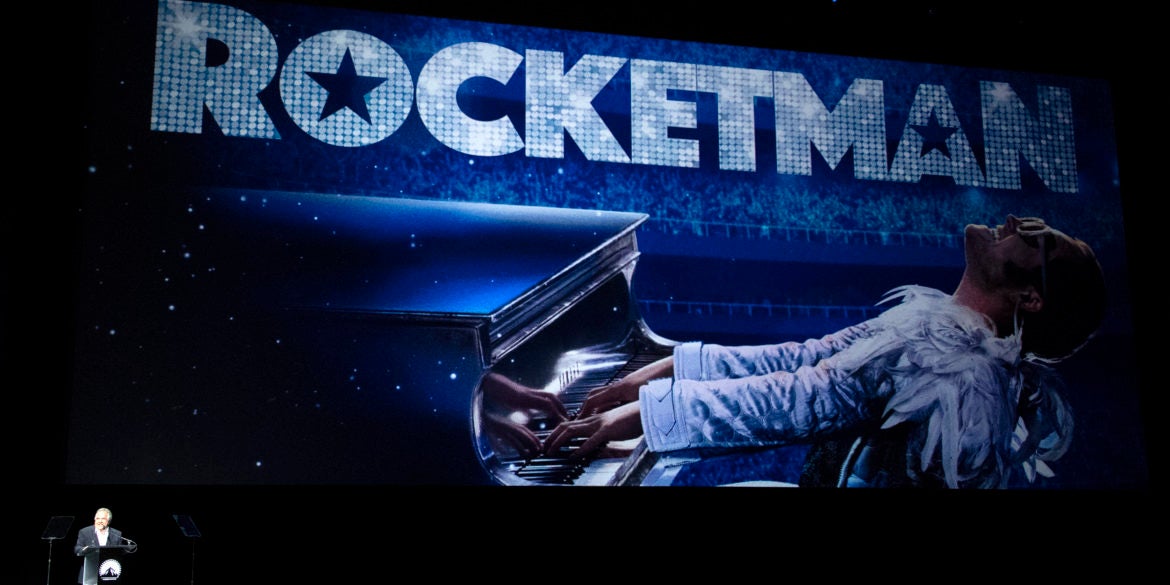 By: James Pheby via Agence France-Presse

After the near billion-dollar smash that was “Bohemian Rhapsody,” the Elton John biopic “Rocketman” will touch down Thursday at the Cannes film for a premiere at which the star himself is primed to play.

One of the world’s best-selling artists, the gay star’s career has spanned nearly five decades, much of it lived in a hazy whirl of sex, drugs and rock ‘n’ roll.

Which gives plenty of material for Dexter Fletcher — the British director drafted in at the last minute to save the Freddie Mercury film — to play with.

The movie explores the singer’s long and successful songwriting partnership with lyricist Bernie Taupin, the result of a random pairing by a London record company, which produced seven consecutive US number one albums in the three years between 1972-75.

He also went down in British royal history when he performed his song “Candle in the Wind” with reworked lyrics at the funeral of Diana, Princess of Wales, in 1997. She had been a personal friend.

The song was later re-released and sold more than 33 million copies, making it the best-selling single of all time after Bing Crosby’s “White Christmas”.

John has given more than 3,500 concerts worldwide and early in his career became known for outlandish stage costumes, glasses that spelled his name in lights and doing handstands on his keyboards.

Cocaine made me open up

He also plunged headfirst into the rock star lifestyle, saying he now regrets his substance abuse.

“I always said cocaine was the drug that made me open up. I could talk to people,” the naturally shy musician told NPR of his introduction to drugs in the 1970s.

“I’d stay up, I’d smoke joints, I’d drink a bottle of Johnnie Walker then I’d stay up for three days,” he later said, adding he had been “very close” to death.

“I would have an epileptic seizure and turn blue, and people would find me on the floor and put me to bed, and then 40 minutes later I’d be snorting another line,” he said.

He credits his sobriety to a meeting with US teenage haemophiliac Ryan White, who contracted HIV through a contaminated blood transfusion, calling him the “spark that helped me to recover from my addictions” and become an anti-AIDS activist.

He set up the Elton John AIDS Foundation in 1992, a year after his close friend Freddie Mercury died of the disease, and has raised more than $400 million.

A prodigiously talented child, John began playing the piano at the age of three and at 11 won a junior scholarship to the Royal Academy of Music in London.

By the age of 15, he was working as an errand boy for a music publishing company by day and playing gigs by night.

Five years later in 1967, after answering an advertisement placed by a record company, he was paired up with Taupin who had answered the same ad.

Between 1970 and 1976, the duo’s songwriting partnership produced a string of hit singles such as “Your Song”, “Rocket Man”, “Crocodile Rock”, “Daniel” and “Goodbye Yellow Brick Road.”

“Don’t Go Breaking My Heart,” a duet with the British singer Kiki Dee, went to number one in both the UK and US charts.

Famed for his extravagance, but also his attachment to his humble roots, he bought Watford Football Club in 1976 before selling it in 1990, famously crying in the stands when the club reached the 1984 FA Cup Final, which it went on to lose.

Queen Elizabeth II knighted him in 1998 for services to music and charity.

However, the extent of his lavish lifestyle was laid bare when he sued his former management in 2000.

The star admitted spending 30 million pounds — now about $40 million — in under two years, including nearly 300,000 pounds on flowers, telling a judge: “I like spending my money.”

He is estimated to be worth £320 million ($417 million, 372 million euros), according to the latest Sunday Times rich list.

John announced last year he would be retiring from touring after a three-year farewell tour, saying he wanted to spend time with his children.