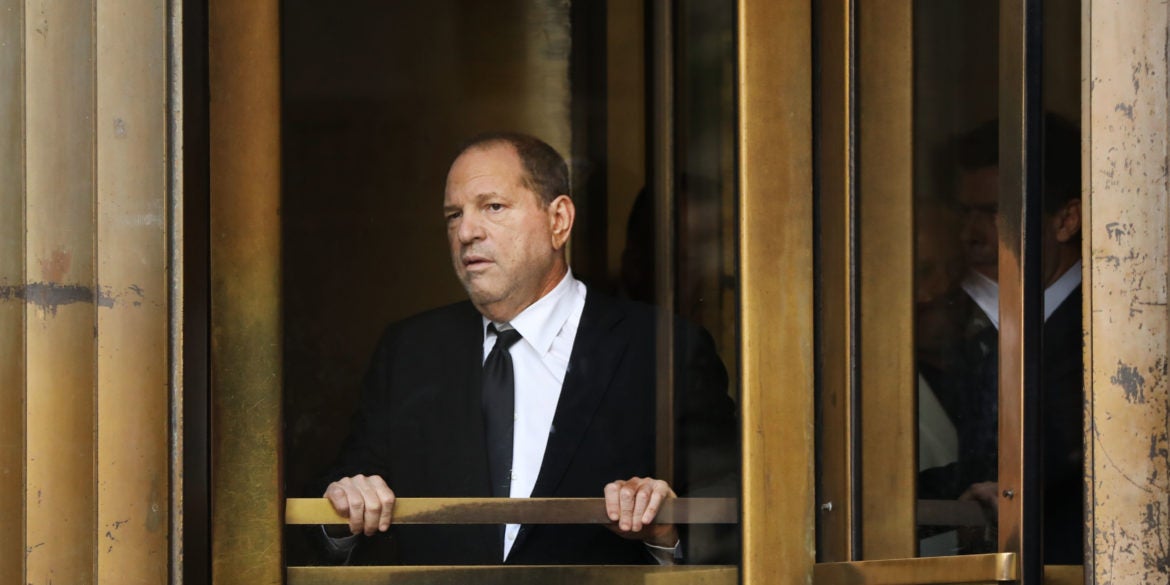 NEW YORK, NEW YORK - AUGUST 26: Harvey Weinstein exits court after an arraignment over a new indictment for sexual assault on August 26, 2019 in New York City. The new charges against the movie mogul are from an indictment involving the actor Annabella Sciorra. Weinstein plead not guilty on all charges and his sex-crimes trial has been delayed until January. Spencer Platt/Getty Images/AFP

A US judge on Monday postponed Harvey Weinstein’s sexual assault trial until next year, after New York prosecutors filed a new indictment that will allow an actress to testify against the fallen movie mogul.

Weinstein, 67, pleaded not guilty to charges of predatory sexual assault relating to two women in a fresh indictment amended so that the actress, another of Weinstein’s accusers, can give evidence as a corroborating witness.

The indictment is effectively the same as an earlier indictment and the two are likely to be merged eventually.

One of the women alleges Weinstein raped her in 2013, while the other claims he forcibly performed oral sex on her in 2006.

Documents released after the 15-minute hearing in a New York state court showed that a third women alleges she was sexually assaulted by Weinstein over the winter of 1993-94 in Manhattan.

The woman’s name is redacted, but lawyer Gloria Allred said it was her client Annabella Sciorra, known for her Emmy-nominated work on the hit television series “The Sopranos.”

“I commend Annabella for her willingness to take the stand and answer questions under oath,” Allred, who also represents one of the two alleged victims in the charge sheet, said in a statement.

Sciorra, 59, helped trigger the #MeToo movement in October 2017 when she told The New Yorker magazine that Weinstein raped her at her home in Manhattan in 1993.

Weinstein cannot be charged with raping Sciorra because the statute of limitations has expired.

The judge denied a prosecution request that Sciorra be allowed to give evidence at Weinstein’s trial because she had not testified before a grand jury as required under US law.

The new indictment will allow her to testify, which could strengthen the prosecution’s case.

Judge James Burke postponed the start of the trial to January 6, 2020 to give Weinstein’s defense time to prepare. It had been scheduled to start on September 9.

Trial to be moved?

Weinstein, wearing a dark suit, laughed and said “not really” when he was asked by the judge whether he wanted to go to trial.

He faces life in prison if convicted.

Once one of the most powerful men in Hollywood, Weinstein has been accused of harassment and assault by more than 80 women, including stars such as Angelina Jolie and Ashley Judd.

The original accusations against him were a catalyst for America’s #MeToo movement.

Weinstein, the co-founder of Miramax and producer of “Pulp Fiction,” has always insisted his sexual relationships were consensual.

The number of accusers appearing in court can influence the verdict, as seen in the 2018 conviction of Bill Cosby.

Allred said Sciorra — who starred in Spike Lee’s “Jungle Fever” (1991) — was willing to testify despite anticipating a “vigorous cross examination by the defense, which no doubt would not be pleasant for any witness to endure.”

Weinstein’s lawyers denounced the new indictment as a “desperate” last-minute move and want it dismissed. They have 45 days to register motions against it.

“The case itself is weak and they feel they need this portion to help,” Weinstein’s lawyer Donna Rotunno told reporters outside court.

Allred told reporters that it was up to the jury to decide whether it was strong or weak.

Weinstein’s attorneys have also asked for the trial to be moved, arguing that intense coverage in New York’s tabloids has meant he won’t get a fair trial.

An appellate court will likely make a decision later on Monday, but the request is expected to be rejected.