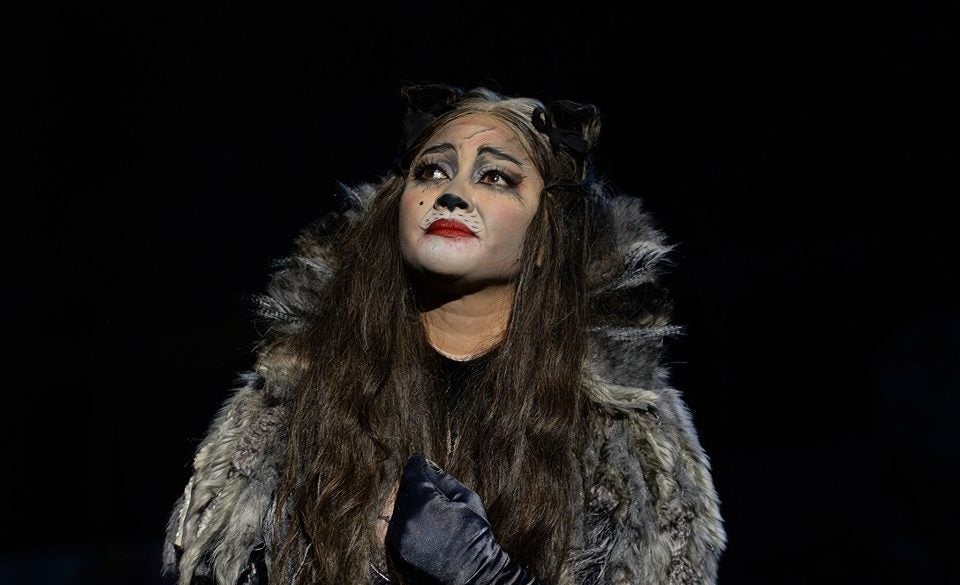 Joanna Ampil as Grizabella in “Cats”

‘I think it’s because I grew up watching . . . princesses who just wait for their Prince Charming to come. I find that boring as compared to an empowered woman’

“Playing the same character gets better with age,” says acclaimed theater actor Joanna Ampil, referring to two iconic roles she had been, and will be, reprising: Mary Magdalene in the recent Tokyo concert of “Jesus Christ Superstar,” and Grizabella in the international tour of “Cats” in Manila in November.

Andrew Lloyd Webber’s “Cats” is one of the longest-running shows on Broadway and the West End. It is based on T.S. Eliot’s “Old Possum’s Book of Practical Cats,” which has all the Jellicle cats vying for the honor of being reborn in the Heaviside Layer by their leader, Old Deuteronomy. This door to rebirth takes place only one special night of the year.

Ampil gives her own spin on Grizabella, the aging outcast whose show-stopping song, “Memory,” has immortalized her in the minds and hearts of generations of theatergoers.

“My Grizabella is a very curious character,” Ampil says. “She got out of her tribe in her youth, because she wanted more out of life and wanted to see and experience more. This cost her her place in the tribe.

“And because life has not been kind to her, she wanted a new lease. To be able to do that, she has to return to the tribe and be reborn. Despite humiliation, she has to remain hopeful to get back and beg for that place.”

Manila audiences, though, can expect a bit more fire from her rendition of the elderly cat, which Ampil, 44, first saw onstage when she was 17. She says she’s drawn to playing independent characters who do not conform to the dictates of society.

For instance, Magdalene is the lone female who speaks (or sings) out in Jesus’ group of wandering apostles. Grizabella, despite her mistakes, refuses to be denied her one chance at redemption.

Even in Atlantis Theatrical Entertainment Group’s 2018 production of “Waitress,” Ampil’s feisty titular character made the hard decisions of having a baby and breaking off a passionate affair.

The top two characters on her wish list are also outsiders: Mary Poppins, the charismatic and mysterious nanny who saves a family in the show that bears her name; and the misunderstood witch Elphaba who mounts a revolution in “Wicked.”

“I’m always more interested in playing characters not defined by a relationship with anyone,” Ampil says. “I think it’s because I grew up watching a lot of movies and cartoons about princesses who just wait for their Prince Charming to come. I just find that a little bit boring as compared to an empowered woman.”

Ampil looks up to British stalwarts of the stage, such as Maggie Smith, Judi Dench and Helen Mirren—all, coincidentally, appointed Dame Commander of the Order of the British Empire for their contributions to theater.

“These veterans are still relevant,” says Ampil. “They give me hope that an actor’s career can be limitless.”

Her own career has remained borderless since she first attained international fame when theater mogul Cameron Mackintosh tapped her to play Kim in the 1995 Sydney premiere of “Miss Saigon.”

Ampil has successfully managed to make her mark on the West End in musicals like “Superstar,” “Saigon,” “Avenue Q” and “Les Miserables,” while making time for Manila-based productions like “Waitress,” Resorts World Manila’s “The Sound of Music” (2011) and, just recently, the Pinoy Playlist Music Festival and the Cultural Center of the Philippines’ 50th anniversary gala.

Asked how a theater actress can be successful here and abroad, Ampil says: “It takes hard work, passion for the craft, discipline and a good attitude. One needs to try to keep his or her reputation untainted.”

Not surprisingly, the actress, who gravitates toward strong outlier roles, adds: “I also embrace my ethnicity and see it as an advantage.” —CONTRIBUTED