Solace in the company of Leila | Inquirer Lifestyle 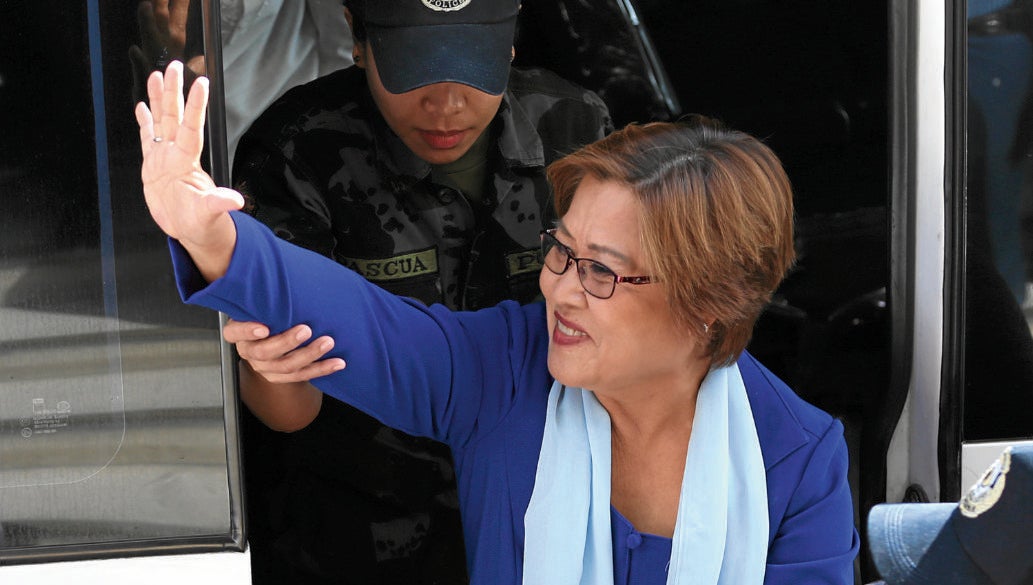 Solace in the company of Leila

After our first visit to the detainee Leila de Lima in Camp Crame, my husband and I decided we would see her one Sunday every month, at least, until she was released. I must confess, though, that our reasons became not entirely selfless.

If we are able to console her we come away consoled, too. If we are able to ease the hopelessness of her situation under this vengeful President, we feel ourselves more hopeful and courageous.

In her presence, we feel reenergized and surer than ever that we will never tire of fighting for her freedom, for it is our freedom, too.

During our visits, something short of miraculous happens at Mass at the Parokya ni Leila—that’s what Father Robert calls it. He usually concelebrates Mass with Fathers Flavie and Bert.

The three of them, along with a benign Canossian nun, Sister Ling, are themselves being persecuted for a most incredible crime: conspiracy to commit kidnapping.

Their supposed victim had a cell phone with her at all times and came and went freely as a refugee in a convent. Once, she even picked up her child to take and keep with her. During her “detention against her will” she met lawyer Jun Sabio at a mall.

I have never met men better suited for priesthood in these times. It is they, not the Catholic hierarchy, who are at the forefront of this ongoing moral war—good vs evil, truth vs lies. Their homilies and shares give life to the Gospel and are so inspiring we await them with a great sense of anticipation.

Last Sunday the Gospel was about a widow whose fate is in the hands of a very corrupt and good-for-nothing judge. Because of her dogged determination, she is able to wear the judge down and make him decide in her favor.

The lesson is not just about persisting in the fight but about every victory strengthening and deepening one’s faith and moral conviction.

We have indeed found solace in the company of Leila. In her prison we bond with like-hearted strangers who quickly become strangers no more, but brothers and sisters in the fight not just for Leila but for justice.

We have become disciples in a way, going around and enthusiastically inviting others to come to her Parokya so that their anger, hopelessness and dread of their children’s future may be eased. We have ourselves brought in some, and they themselves admit coming away self-renewed and returning.

For some reason the custodial center seems to be getting stricter. Not only does the approval of requests to visit take longer but the advice is sent at the very last minute. Last Sunday we received it on the morning itself of our visit. As a result two of our companions backed out the night before.

We were told that a group of about 40 provincial travelers had applied and canceled due to the late approval.

One regular visitor was denied because of her bright orange blouse—too easy to blend in with inmates. She had to borrow a shawl from Leila herself to gain entry. In fairness to the guards, the rules come from on high.

Yellow is the other banned color. Shirts making statements like “Free Leila” are a no-no, too. Petty things that cannot easily discourage determined visitors.

Once inside there is an air of camaraderie. It is, after all, a reunion of sorts, and the intimacy is brought about after a sharing from flock.

We love to stay for the home-cooked lunch that Leila, a Bicolana and a good cook herself, has her trained cook prepare. I love the laing, always on the Sunday menu. Leila’s sugar count is down to normal; there were sapin-sapin and maja blanca for dessert.

In such an atmosphere, it is easy to momentarily forget we are inside a prison under CCTV surveillance, until it’s time to go.

We are released and are back through the same heavy doors we entered coming in after some frisking and separated from all communication to the outside world. Now we are given back what we couldn’t bring inside.

It is usually then that I realize with some relief that I had again managed to avoid using the prison toilet. With mixed emotions, but braver than ever, I step out into a free world, the one deprived Leila for nearly a thousand days now—and counting.

She is reading Laura Hillenbrand’s book “Unbroken.” She will be fine.