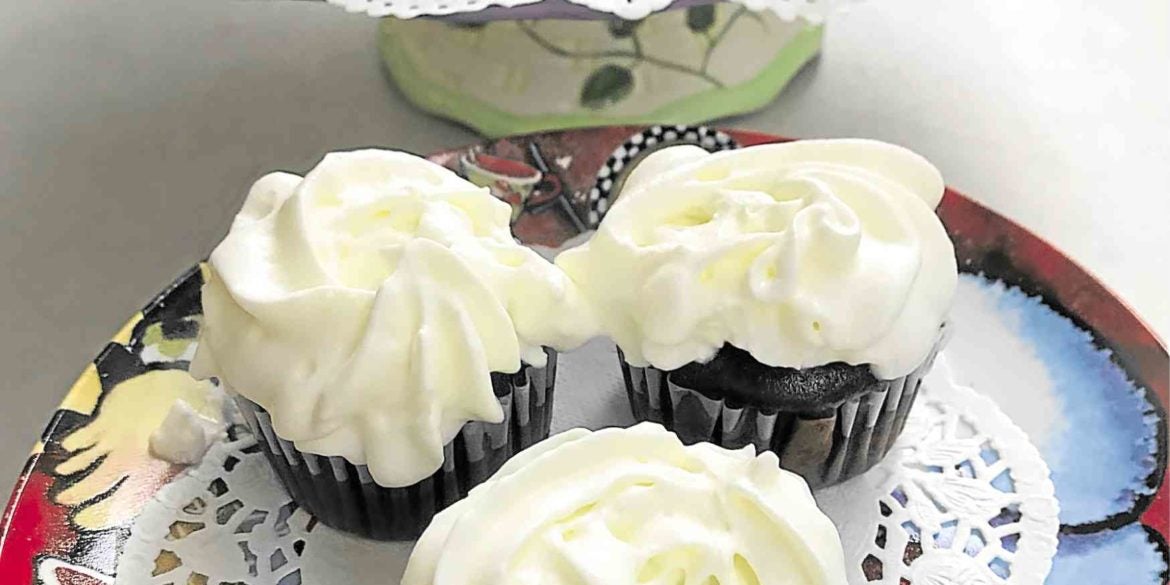 Frost the cupcakes just before serving.

Lately, it seems to me that my diet has been full of sugar.

During a recent dinner  at home, two friends brought two different cakes: a moist, tangy lemon bundt cake and a carrot cake with layers of creamy icing. One of my favorite couples also brought four gallons of Arce ice cream. This is not to mention the buko pie I bought from a neighbor. Yum to all of that but yikes, too.

Such sugar overload should be a no-no. In fact, in one article I read several months ago, an American doctor condemned sugar as the source of all nutritional evil.

Still, can one give up sugar completely?

The answer, as my favorite nutritionist Sanirose Orbeta would say, is moderation. You can eat sugary desserts but in small quantities only. Perhaps instead of eating a whole slice of cake, you can share it with a friend or two so you eat only one half of it, or even better just a third.

The same doctor who (rightfully) condemned the overuse of sugar said he eats cakes only on weekends—and the cakes are baked by his wife, using only half the sugar called for in the recipe.

He said he hardly notices the difference between the half-sugar cake and the regular one with a full dose of sugar.

This got me thinking that perhaps I can do the same. A cake with half the sugar? It’s possible.

I almost feel guilty when I serve it to friends because they think I’m a good baker when actually all I did was follow a simple and easy recipe.

But now, in the interest of eating less sugar, could this cake withstand some moderation in the amount of sugar?

I’m happy to say that I got very good results in my quest for using less sugar. Instead of using two cups of sugar, I used only one and one-fourth.  Even better, I used low-fat milk instead of regular milk and only half a teaspoon of salt to lessen the sodium.

I also baked it into cupcakes instead of a cake so it wouldn’t need so much frosting (the original recipe called for a two-layered cake with frosting in the middle and on top of the cake).

The cupcakes turned out moist and rich, just like the real “Perfectly Chocolate” chocolate cake from Hershey. The sweetness was detectable but in the most subtle way.

For frosting, I used Reddi Wip extra creamy dairy whipped topping, which, according to the label, has no artificial flavors or sweeteners and no artificial growth hormones.  It has only 15 calories per two tablespoons which makes it an almost guilt-free indulgence.

Here’s the recipe for my moderated “Perfectly Chocolate” chocolate cupcakes. I’ll still feel guilty when I serve them to friends because now they’ll think that not only am I a good baker, but that I sort of eat healthy, too (only partially true).

Use low-fat milk, not skim milk which is too watery.

Frost the cupcakes just before serving so the whipped cream topping doesn’t sag.

If desired, top the frosting with rainbow sprinkles to make the cupcakes more colorful.

The cupcakes are so moist and rich you can even serve them without frosting.