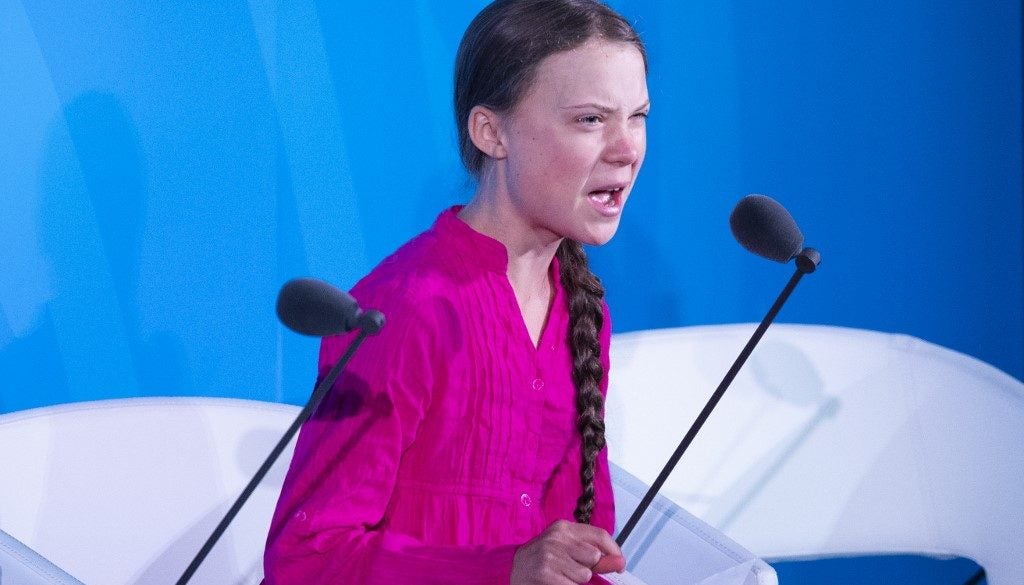 (FILES) In this file photo taken on September 23, 2019, Youth Climate activist Greta Thunberg speaks during the UN Climate Action Summit at the United Nations Headquarters in New York City. - US President Donald Trump on December 12, 2019, slammed Time magazine's naming of Thunberg as 2019 Person of the Year, saying the climate activist should "chill" and go see a movie. "So ridiculous. Greta must work on her Anger Management problem, then go to a good old fashioned movie with a friend! Chill Greta, Chill!" he tweeted. (Photo by Johannes EISELE / AFP)

Below are the most-Googled personalities of 2019, and the stories behind why they were trending.

“The New England Patriot’s wide receiver Antonio Brown was released by the Patriots in September amid the NFL investigation into rape and sexual assault allegations which he has denied. Brown played one game for the Patriots, who signed him after he engineered his departure from the Oakland Raiders but before his former trainer filed a civil lawsuit against him accusing him of sexually assaulting her.” (Source: Agence France-Presse)

Since joining Paris Saint-Germain, Brazilian football star Neymar has been at the center of many controversies, including allegations of sexual assault. According to Forbes, Neymar’s five-year contract with Paris Saint-Germain through June 2022 is worth a $350 million salary. His transfer from Barcelona to PSG stands as the most expensive in the world at $263 million, which was paid for in full ahead of his signing.

In May, the feud of beauty Youtubers James Charles and Tati Westbrook broke the Internet. It began with Westbrook’s 43-minute video, “Bye Sister”, which criticises James Charles of being a sexual predator, among other things. A back-and-forth ensued until, finally, Charles came out with the 41-minute-long “No More Lies” that fired back on Westbrook’s allegations. The result: Charles regained a million subscribers and Westbrook lost 200,000.

“US television actor Jussie Smollett has been at the center of an alleged fake assault after claiming he was attacked in the middle of the night in January. The black, openly gay actor has denied accusations that he hired two acquaintances to stage a racist and homophobic attack to gain publicity.” (Source: Agence France-Presse)

In October, comedian Kevin Hart trended on Twitter alongside “rest in peace”, alarming fans that wrongly thought Hart had died. Hart suffered from a car accident in September. “I’m about 65 to 75 percent back to my physical self,” Hart told Ellen Degeneres during a recent interview on the Ellen Show.

“Greta Thunberg, the Swedish teenager who became the voice of a generation facing the climate change emergency, was Wednesday named Time magazine’s 2019 Person of the Year. Unknown to the world when she launched a solo strike against global warming in mid-2018, the 16-year-old has since inspired millions in a worldwide movement that saw her tipped as a Nobel laureate.” (Source: Agence France-Presse)

R. Kelly was the most Googled musician of 2019. According to Google, the related searches to his name were “R. Kelly Gayle King” and “Surviving R. Kelly”, the documentary that tackled allegations of abuse, pedophilia, and predatory behaviour against the R&B singer.

Joaquin Phoenix played the titular character in “Joker”, which became the first R-rated film to surpass $1 billion at the box office. In October, TMZ reported that Phoenix got into a car accident with a Los Angeles Fire Department Truck. After collision, Phoenix’ Tesla took the worst damage from the accident.

E! News reported this to be the “cheating scandal of the decade,” which has to do with Khloe Kardashian’s boyfriend Tristan Thompson, seen making out with Kylie Jenner’s best friend Jordyn Woods. Last December 12, Page Six reported that Woods is “over it all.” Woods said online, “I don’t do subliminals, I do general statements and if I have something to say about someone or to someone, Imma say it to them or not at all. If y’all are tired of this, I’m exhausted. Let’s move on. It’s all love. It’s all good.”