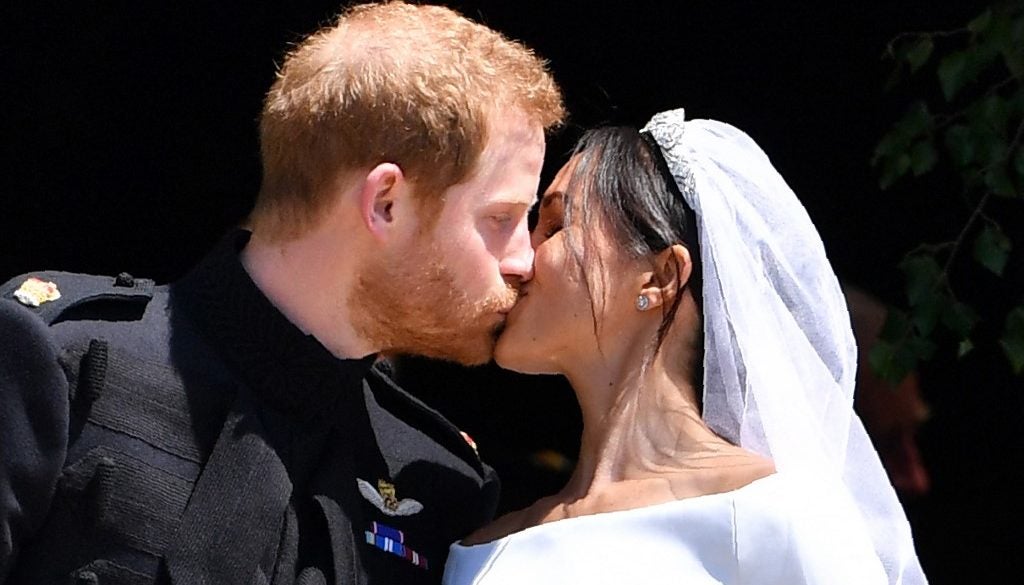 (FILES) In this file photo taken on May 19, 2018 Britain's Prince Harry, Duke of Sussex kisses his wife Meghan, Duchess of Sussex as they leave from the West Door of St George's Chapel, Windsor Castle, in Windsor, after their wedding ceremony. - Britain's Prince Harry and his wife Meghan will step back as senior members of the royal family and spend more time in North America, the couple said in a historic statement Wednesday. (Photo by Ben STANSALL / POOL / AFP)

Britain’s Prince Harry and his wife Meghan announced Wednesday that they were stepping back from major royal duties and would be partially relocating to North America.

Here are five major moments in their relationship, which has seen them go from being the royal family’s hottest property to their  shock announcement in less than two years.

“After many months of reflection and internal discussions, we have chosen to make a transition this year in starting to carve out a progressive new role within this institution. We intend to step back as ‘senior’ members of the Royal Family and work to become financially independent, while continuing to fully support Her Majesty The Queen. It is with your encouragement, particularly over the last few years, that we feel prepared to make this adjustment. We now plan to balance our time between the United Kingdom and North America, continuing to honour our duty to The Queen, the Commonwealth, and our patronages. This geographic balance will enable us to raise our son with an appreciation for the royal tradition into which he was born, while also providing our family with the space to focus on the next chapter, including the launch of our new charitable entity. We look forward to sharing the full details of this exciting next step in due course, as we continue to collaborate with Her Majesty The Queen, The Prince of Wales, The Duke of Cambridge and all relevant parties. Until then, please accept our deepest thanks for your continued support.” – The Duke and Duchess of Sussex For more information, please visit sussexroyal.com (link in bio) Image © PA

Prince Harry was 31 with a few failed relationships and his 10-year army career behind him when they first met, while US actress Meghan Markle was 34 and a divorcee of three years.

They were set up by a mutual friend when Meghan was passing through London in July 2016, with the couple later revealing they knew little about each other. The speed of their relationship surprised them both.

Both quickly sensed their blind date could blossom into something bigger.

Their romance was under cover for the first five or six months, and largely conducted through nights in behind closed doors — and a camping trip to Botswana.

Eventually, Harry proposed in November 2017 during a night in roasting a chicken.

The relationship was welcomed by the British press, which saw Meghan as a breath of fresh air for the royal family — a woman who had proved herself with a career of her own, who would project a more modern image.

There was also public relief that Harry, who had walked behind his mother Diana’s coffin as a 12-year-old boy, had found settled happiness in his life.

The couple tied the knot at Windsor Castle on May 19, 2018 in a ceremony filled with personal touches, mixing British pomp and African-American culture in front of a celebrity-studded congregation and cheering crowds.

Meghan began her walk down the aisle alone after falling out with her wayward father, while firebrand US pastor Michael Curry delivered a full-throttle address invoking slaves and the power of love.

The couple moved out of their two-bedroom home on the Kensington Palace estate in London and into the much bigger Frogmore Cottage on the Windsor Castle estate in April 2019 ahead of the birth of their son.

Born on May 6, they named him Archie Harrison Mountbatten-Windsor, eschewing royal titles.

“I have the two best guys in the world so I’m really happy,” Meghan declared, showing off the baby at Windsor Castle.

The goodwill that surrounded their marriage gradually began to ebb away as the couple’s shine came off.

Critics did not take kindly to what they saw as the couple’s right-on causes, complaints at their treatment while living an expensive lifestyle, war on the media, and seeming hypocrisy, preaching on the environment while jetting around on private flights.

Rumours swirled that Meghan was difficult to work with, amid reports of staff members quitting one after another.

Announcing that Meghan had gone into labour after the baby was actually born infuriated the British press.

Their decision not to let the public know who Archie’s godparents were was also seen as petty.

They were slated for the £2.4 million cost of refurbishing Frogmore Cottage.

A well-received tour of southern Africa saw their stock rise, but as it concluded in early October last year, the couple overshadowed their own good work by launching a written tirade on the press and legal action against certain newspaper groups.

In an ITV television documentary that followed, Harry said he and William were “on different paths” and have “good days” and “bad days” in their relationship — confirming rumours that the couple were diverging from the fold.

In Wednesday’s shock announcement, the couple said they intended to step back from frontline royalty and would attempt to become financially independent.

Currently their work and running costs are funded by Harry’s father Prince Charles.

They said they will continue to support Queen Elizabeth and honour their duties to her, the Commonwealth and their patronages, indicating they are not fully quitting.

The couple also said they were going to launch a new charitable entity, and spend much of their time in North America.

Harry and Meghan were among the most senior members of the royal family and were expected to take a much bigger role as Queen Elizabeth scales back her duties and Charles eventually becomes king.

Their future is now up in the air.