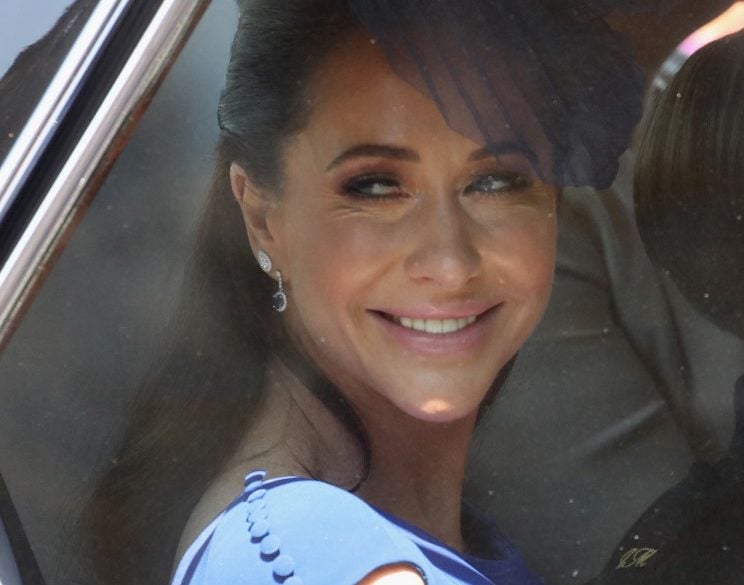 According to British media, the 39-year-old Canadian has been watching baby Archie, Meghan and Prince Harry’s son, while the couple went back to England to make their bombshell announcement that they were quitting their frontline royal duties.

The two women met in 2011, while Meghan was living in Toronto to film the series “Suits.” Nearly the same age (Meghan is 38), they soon discovered numerous shared interests, including yoga, fashion and travel.

Rather than straining the friendship, Meghan Markle’s entrance into the royal family appears to have brought the two women even closer.

Her involvement went well beyond just clothing, though — Meghan relied on her friend for a range of details, and Mulroney’s two sons and daughter were pageboys and a flower girl in the May 2018 ceremony.

Always sharply attired, her sapphire blue dress caused a sensation at the royal wedding in St. George’s chapel, where Mulroney was one of the best-situated guests, directly in the cameras’ field of view.

Mulroney and her sisters-in-law co-founded the non-profit The Shoebox Project in 2011, the same year she met Meghan. The charity organizes donations of feminine health and beauty goods to low-income and homeless women in Canada.

Since the wedding, the mother of three has been in high demand. She regularly appears on the US television show “Good Morning America” on ABC.

She has also been hired as a stylist by US actress, screenwriter and producer Mindy Kaling (known for “The Office” and “Late Night”).

No reference is made to her friendship with Meghan Markle on ABC, nor on the Canadian talk show “Cityline”, where Mulroney has been a fashion correspondent for years.

Mulroney appears to take visible precautions not to give the impression that she benefits from her relationship with Meghan.

Before Harry and Meghan made their relationship official, Jessica Mulroney shared many photos of herself with the now-Duchess of Sussex on her Instagram.

But since the couple’s marriage, Mulroney has been much more assiduous. She only posted one message after the wedding: “Proud friend, proud mom,” she wrote.

“Every person has to have a bit of privacy in their life,” Mulroney told Harper’s Bazaar in March 2019, the only interview she has given since the wedding.

“There are things I’ll never talk about for sure,” she said, referring to her friendship with Meghan.

Mulroney has instead taken a more oblique approach. In August, following backlash that Meghan and Harry took a private jet to visit the singer Elton John on the French Riviera, she slammed so-called “critics” who attacked her friend.

“Shame on you, you racist bullies,” she wrote on Instagram, without going into further detail.

And on Thursday, just after Harry and Meghan’s announcement, Mulroney took to Instagram once more to share a quote from the black singer Gina Carey in an allusion to recent developments and a show of support for her friend.

“A strong woman looks a challenge in the eye and gives it a wink,” she posted.