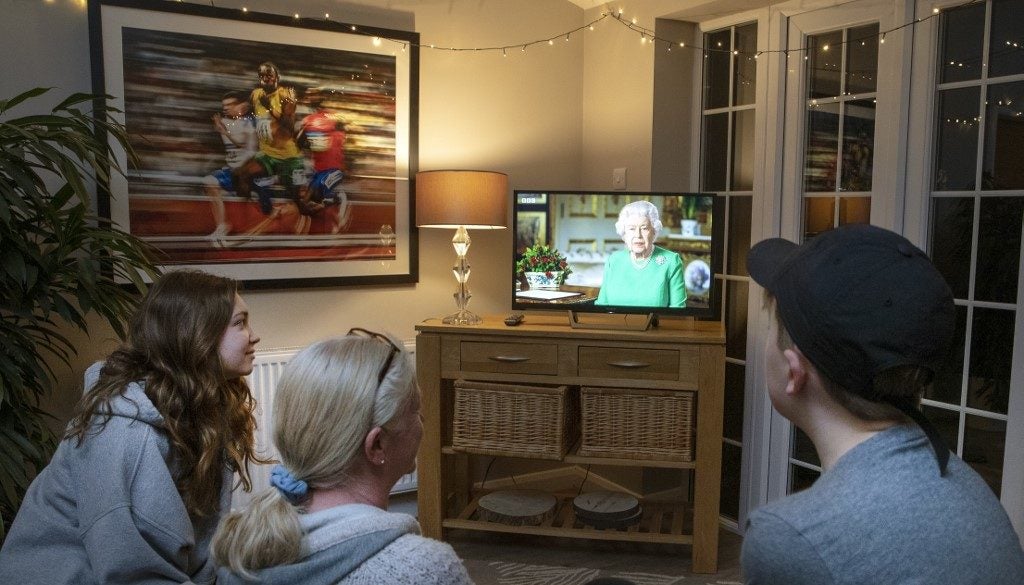 A family in the village of Hartley Wintney, west of London, on April 5, 2020 watches Britain's Queen Elizabeth II deliver a special address to the UK and Commonwealth recorded at Windsor Castle in relation to the coronavirus outbreak. - Queen Elizabeth II urged people to rise to the challenge posed by the coronavirus outbreak, in a rare special address to Britain and Commonwealth nations on Sunday. (Photo by ADRIAN DENNIS / AFP)

Queen Elizabeth II delivers an annual Christmas Day speech to Britain and Commonwealth nations every year but has only rarely made a special address during a time of national crisis.

Sunday’s broadcast about the coronavirus outbreak was only the fourth since she came to the throne in 1952.

The queen made a brief televised address on February 24, 1991 as allied forces, including British troops, began a land offensive against the Iraqi occupation of Kuwait.

She called for people to unite and pray that the offensive would be as “swift as it is certain” and with “as small a cost in human life and suffering as possible”.

She also expressed the hope for a “just and lasting peace”.

Unusually, the queen’s September 5, 1997 address to the nation was live, not recorded, and came after days of criticism and anger for her sticking to protocol after Diana’s death.

The princess of Wales — ex-wife of heir to the throne Prince Charles — was killed in a high-speed car crash in Paris on August 31, prompting an unprecedented outpouring of public grief.

On the eve of Diana’s funeral, the queen, dressed in black and with a backdrop of crowds of mourners outside Buckingham Palace, said she spoke from the heart as both queen and a grandmother.

She called Diana “an exceptional and gifted human being”.

“In good times and bad, she never lost her capacity to smile and laugh, nor to inspire others with her warmth and kindness,” she said.

On April 8, 2002, the queen said she was “profoundly touched” by the tributes to her mother, also called Elizabeth, who died on March 30 aged 101.

Hundreds of thousands of people paid their respects as the Queen Mother lay in state for several days at Westminster Hall, central London, before her funeral on April 9.

“I count myself fortunate that my mother was blessed with a long and happy life,” the queen said in a message from Windsor Castle, west of London.

“She had an infectious zest for living, and this remained with her until the very end.”

Although not a crisis address, the queen made a recorded speech broadcast on June 5, 2012 to thank the public after four days of celebrations marking the 60th anniversary of her accession.

She described the festivities as a “humbling experience” and said she was deeply touched by the good wishes.

“I hope that memories of all this year’s happy events will brighten our lives for many years to come,” she added.