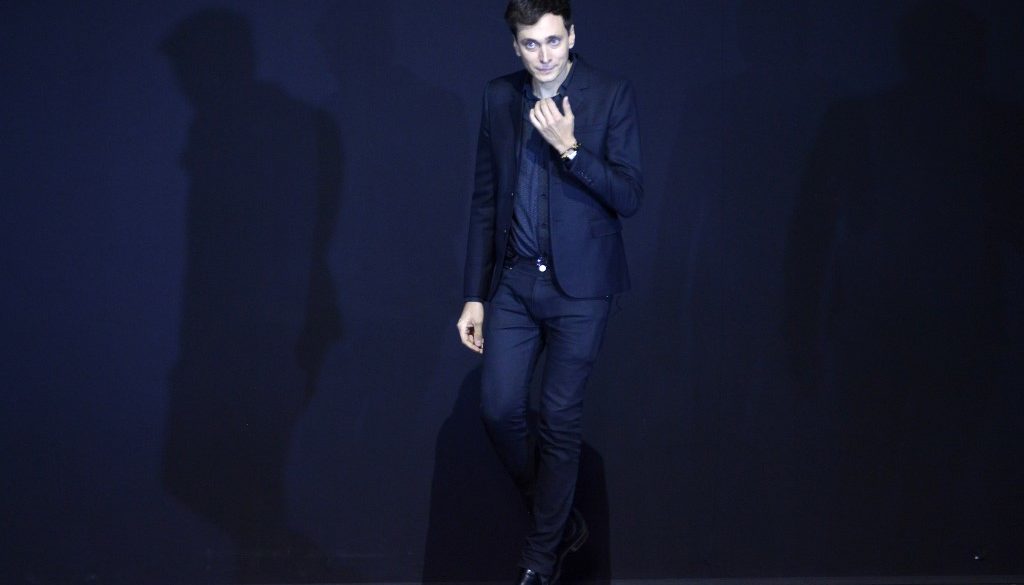 What do Wes Anderson and Hedi Slimane have in common? Well, both are auteurs in their own right, known for crafting universes with a distinct look and a repeating cast of characters. Apart from that, both have also been reported on in the past as being MIA bosses, with Slimane designing the newly christened Saint Laurent Paris from a different continent, and Anderson supposedly directing Fantastic Mr. Fox via e-mail.

When Slimane returned to Saint Laurent in 2012, he was living in Los Angeles, having moved there years prior to pursue creative endeavors outside of a fashion house, in particular photographing its underground music scene. It may have been from a short-lived Vogue podcast, hosted by Andre Leon Talley, that I first heard that Slimane designs Saint Laurent via Skype. In the episode, Talley talks to Vogue’s fashion editors, including Grace Coddington, Tonne Goodman, Phyllis Posnick, and Virginia Smith about the fashion week that was. (“What are the trends?” Talley asks. “We don’t like trends!” the editors say.)

Talley doesn’t like the “inky dinky tiaras” at Saint Laurent, while Coddington points out that if Yves himself were alive and designing today, he would be a lot like Hedi. Talley mentions Slimane’s satellite style of creative direction, but the editors seem to be unaware of it. Was it fashion’s open secret or just an urban legend?

In an interview that originally appeared on Yahoo Style in 2015, where Slimane talked at length about his Saint Laurent strategy, the Skype question was brought up. The interviewer asked, “How is the process of making the samples and doing the fittings coordinated between L.A. and Paris? Does it involve a lot of Skype-ing?” According to Slimane, “there is no Skype-ing at all actually.” He said: “It is extremely organized, and everything is planned precisely six months ahead of time. The schedule is tight, and I’m strictly following it, as I need to make sure my team is never behind deadlines. There is no Skype-ing at all actually, but frequent visits from the Paris team, development by development. It is more efficient and faster then it would be in Paris because of the discipline we all have.”

In 2009 Wired reported on Wes Anderson’s “virtual command center” while making Fantastic Mr. Fox. “The pace of the animation process was too laborious and drawn out even for Anderson,” according to the article, “While the yearlong shoot was happening in a London studio, he was crisscrossing the globe. But thanks to a constellation of data-delivery systems, he was still able to micromanage the production.”

“[Anderson] could weigh in instantly on QuickTime clips sent straight to his iPhone or watch dailies that were emailed to him at all hours. ‘I could even pull up a unit’s live feed and see how things were shaping up,’ he says. If a prop or character didn’t suit his famously fastidious eye, he would ask individual set designers and animators for an immediate fix. When a character’s mannerisms were off, Anderson would whip out his Flip videocam and record himself acting out the part.”

It’s interesting looking back at these stories, now that working from home and video conference calls have become a significant part of how we work, across different industries. Come to think of it, why didn’t we do it sooner? While Slimane and Anderson have co-opted different ways to manage teams situated faraway, both talk determinedly about the importance of efficient communication systems and discipline. Both are valuable case studies of leadership styles that redefine what it means to be a hands-on boss today.