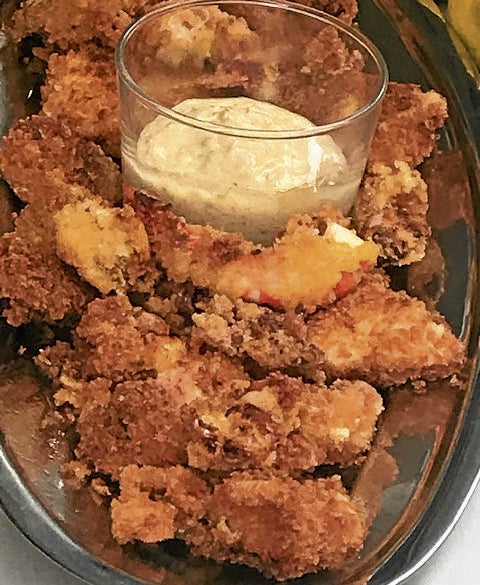 Perhaps few things are more satisfying than a platter of one’s favorite food or delicacy. A platter of assorted cheeses, mixed sausages, or rosy pink sushi, glistening in their freshness. There lies all the versatility of one single ingredient, and the promise of nuances of flavors, of varying tastes and textures.

Few restaurants serve it now, but one of my favorites has always been a platter of mixed seafood. With this platter, I won’t have to choose between having calamari or shrimps or fish fillet. I can have them all in one generously overflowing dish.

Recently, in a quandary over what to cook for dinner, I rummaged through my freezer and managed to extricate enough ingredients to put together a platter of mixed seafood. This was such serendipity, since I had just prepared a batch of rémoulade sauce (see notes below), which goes perfectly with seafood. Though the seafood I used had been frozen, it would have been better if I had used seafood that’s very fresh (as in freshly caught or delivered). But these are restricted times so I don’t have the means to buy fresh seafood daily. Still, thanks to freezer technology, the seafood tasted almost as good as fresh.

Feel free to create a mixed platter of your own. You can use clams, for example, or mussels, oysters and crablets. (For shellfish, it’s better to use very fresh ones.) In a pinch, even fish balls and shrimp balls will do.

Rémoulade sauce (see notes)Peel the shrimps, remove the heads but retain the tails. Slit the back of the shrimps and remove the black veins, if any. Clean the fish fillets, making sure there are no pin bones. Clean the squid well. Remove the black ink, skin and plastic-like backbones. Slice the squid into one-inch rings. Using paper towels, pat all the seafood dry.

In a mixing bowl, combine the flour, paprika, salt and pepper. Beat the eggs in a separate bowl. Spread the bread crumbs on a plate or a large piece of waxed paper.

Dredge the seafood in the flour, dip in the beaten eggs then dredge them in the bread crumbs. In a large frying pan, heat the corn oil to high. To test if it’s hot enough, drop a pinch of flour into the oil. If it sizzles, the corn oil is ready to use.

Lower the heat to medium. Drop the seafood, one batch at a time in the hot oil, first the shrimps, then the fish fillets then the squid (do not overcrowd the pan). Cook until the seafood is golden brown and crisp. Note: Do not overcook so they don’t become rubbery.

Transfer them to a plate lined with paper towels for the excess oil to be absorbed.

Arrange the seafood on a large platter. Serve with rémoulade sauce and lemon slices or with tartar sauce, as an appetizer or as part of a main meal. Makes four to six servings.

• Rémoulade sauce is a mayonnaise-based sauce enhanced with herbs and seasonings, featured in this column in the July 23 issue. (lifestyle.inquirer.net/366887/bored-with-tartar-sauce-try-remoulade-sauce)• Panko is Japanese bread crumbs, available in the bread or baking sections of supermarkets.

• If available, you can also add clams.

• Other add-ons you can put on the seafood platter: fish balls, squid balls, anchovies, fish cakes and shrimp balls.