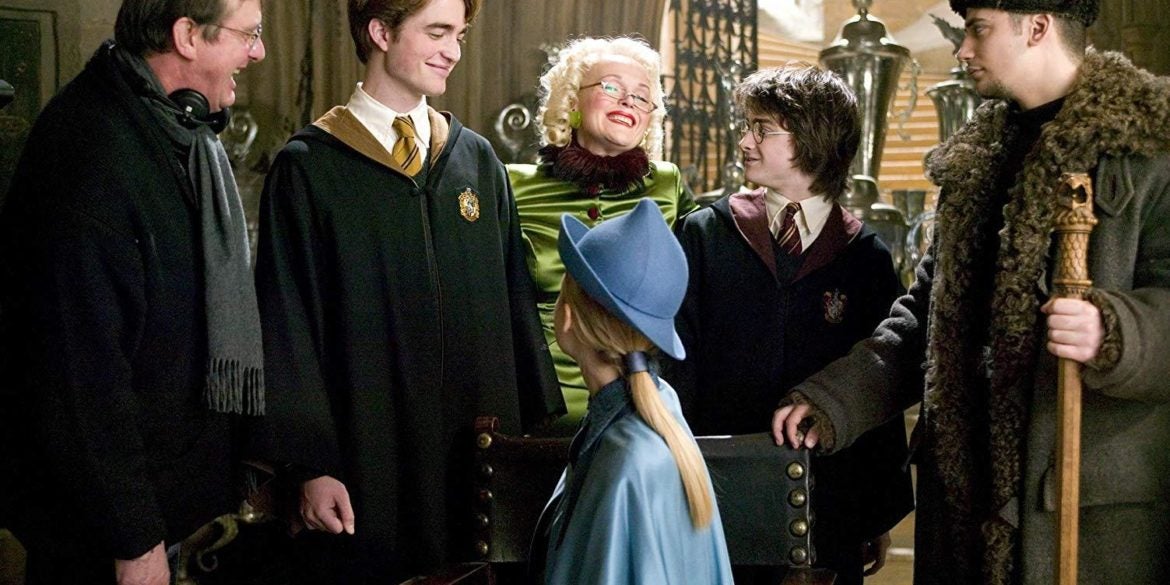 WATCH: Robert Pattinson on the set of ‘Goblet of Fire’, today’s dose of Wizarding World nostalgia

To celebrate Robert Pattinson as the new Batman, looking every bit as legit and anguished in the new teaser trailer that dropped over the weekend, we’re looking back at a pre-Twilight RobPat, fresh-faced and doe-eyed, when he was just an unassuming BMOC at Hogwarts.

After all, it is never not a good time to wallow in some Wizarding World nostalgia, and today’s dose come by way of an extra featurette on the Goblet of Fire DVD: “Meet the Champions.”

Several things we learned from this bit, which no one told you exists on Youtube for the good of the world:

The Hogwarts set is basically a fantasy North Shore, where everyone got along like in middle school, and it’s all a cake with rainbows and smiles.  “It’s like 2,000 people working there. They’re all—without exception—they’re all nice. Everyone,” Robert Pattinson says. We know that Professor Umbridge doesn’t come until the next movie, so it must be true.

RobPat likes getting his makeup done. “I quite like makeup, to be honest. You don’t have to worry about anything. You could go out really late the night before and look like a complete wreck in the morning, and then it’s up to everybody else to fix you up,” RobPat says while getting his makeup done at 7:30 a.m. We can only imagine what it’s like on the Batman set, where the makeup department seems to be tasked to do the reverse!

An unsolicited opinion: I still lament the lameness of the Triwizard Champion’s outfits. I wish the champions got better drip!  (Not to mention the horrible Yule Ball attire of the Patil sisters, another Goblet of Fire costume oopsie.) RobPat says something about “these elaborate costumes”—where?! Well, Daniel Radcliffe himself said that he’s certain there will be another Harry Potter in his lifetime, so I rest assured there will be another opportunity to fix this abomination.

RobPat takes us through the exactly what happened when Cedric Diggory was killed. Apparently it was actually painful IRL. “It was quite an awkward scene to be shot because it had to look painful. If you’re just being pulled back the conventional way, it doesn’t hurt too much because you’re just landing on your back. But that one there had to be like a coil, I had to get hit in my groin.” RIP, beautiful Hufflepuff. And, please, let’s not talk about Cursed Child.

The best thing for RobPat about the Harry Potter set cafeteria food? It’s free. Asked about what the food is like, RobPat says, “It’s generally pretty good. I don’t have to pay for it, so I don’t mind. I don’t eat very much anyway.” It seems that RobPat hasn’t changed much since. “His go-to sustenance basically consists of ‘oatmeal with, like, vanilla protein powder on it’ and canned tuna with Tabasco sauce, eaten straight out of the can.” Yum.

Can someone explain why a Cedric body double had to pull up Harry after they’ve arrived by Portkey at the Quidditch World Cup? The real Cedric was just there!

This little throwback shows us that RobPat is a very nice and chill person, a true Hufflepuff (albeit a tad chaotic) if there ever was one. Can’t wait to see him in Batman and applaud our champion.