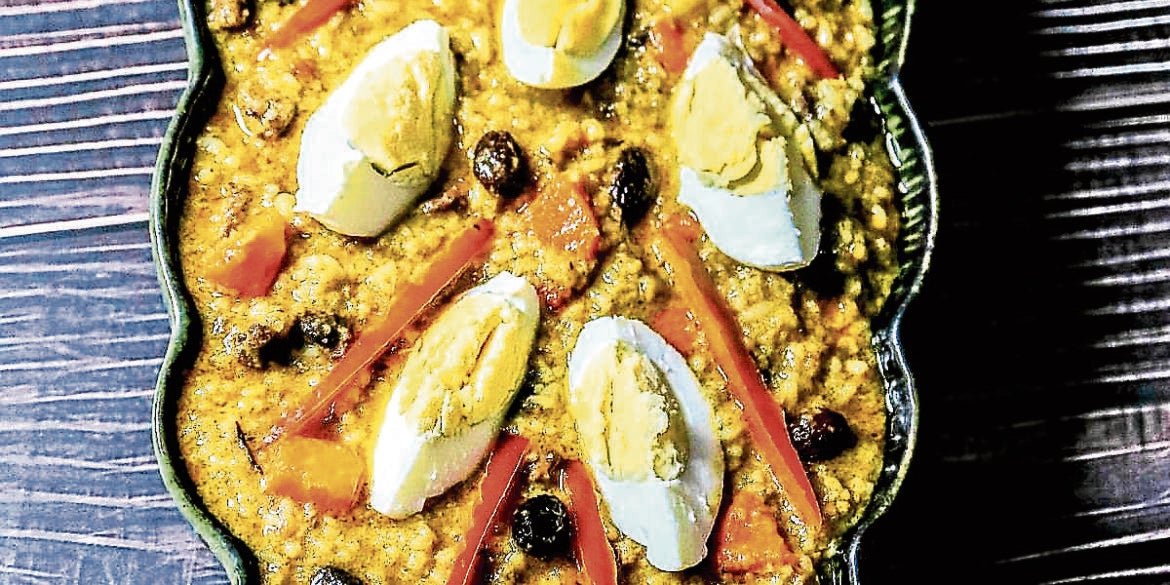 Piging (banquet) and salu-salo (get-together) are so ingrained in our culture. As Filipinos, we innately love to feast and seek every opportunity to do so.

Rheeza Hernandez, food advocate and guardian of the late Ka Mila Enriquez’s historical works on food, pointed out that fiestas, milestones and even our lowest moments, such as the passing of a loved one, are reasons to come together and share a meal with family, friends and the whole community.

On Saturday, as we commemorate our nation’s 123rd year of independence, let us feast on bringhe and menudo, two of our beloved native dishes that chronicle our rich culinary heritage.

According to the food historians of Bulacan, Ka Mila and Dez Bautista, bringhe was Bulacan’s victory food, as it was customary to serve it every time a battle was won during the Spanish era. The rice dish was thus christened Bringhe ng Tagumpay.

Bringhe’s ingredients vary from one locale to the other, but it is basically prepared with glutinous rice, coconut cream and turmeric juice.

In the barrios, it is often cooked with chicken, liver and giblets. In the coastal towns where seafood abounds, a melange of what is caught fresh is added to it: shrimps, crabs, mussels and whatever else the sea offers for the day.In the olden times, bringhe and menudo were said to be food for the common town sfolk, people from the barrios or the “kasama.”

Their counterparts, paella and arroz Valenciana, callos and pamplina, were served to visitors, the affluent and those of higher standing in the community.

Menudo is dubbed the ultimate pagdiriwang (celebration) food, a dish present in every salu-salo.

Each family, every household, has their own menudo rendition. The recipes, ingredients and cooking methods are as diverse as there are cooks who whip them up.

During one of my culinary tours to Bulacan, Noel Valencia, president of Baliwag Historical Association, and Jose Roly G. Marcelino, head of the Arts and Culture Section of Malolos City Tourism Office, lectured me on the subject.

Menudong Bukid (Spanish period) was made of sliced pigue and liver, marinated in salt, pepper, garlic, onion, soy sauce and calamansi juice. It was softened in a little water after marination then sauteed in garlic, onion and fresh tomatoes. The meats were cooked until tender, and the oil from the pork is visibly extracted.

Menudong Tagalog (prewar days) was the same as Menudong Bukid, but tomato sauce was used instead of fresh tomatoes. Fried potatoes, carrots, Vienna sausage and chorizo de Bilbao were added.

Menudong Patay (served during wakes that usually lasted nine days) is similar to Menudong Bukid. The meat is very soft, however, and shredded because the bereaved families would make a big batch for their guests and would reheat it for days (this was done to prevent spoilage in the absence of refrigerators).

½ kg chicken liver and giblets or

Boil and cook malagkit, gata and turmeric juice. Season with salt and pepper.

Wrap it in coconut leaves and steam for a few minutes. Before serving, top with sliced boiled eggs and garnish with sliced red and green bell pepper.

In a big carajay, put all ingredients (except potatoes, carrots, liver and achuete), cook over low fire, stirring occasionally to prevent it from sticking in the pan.

When the sauce thickens, remove the sauce and set it aside. Add achuete juice and continue sauteing until the juice of the meat appears.

Add the liver and with the pork, let it fry a little in its own fat (sangkutsa). Add the sauce, potatoes and carrots, cook until tender. Serve.