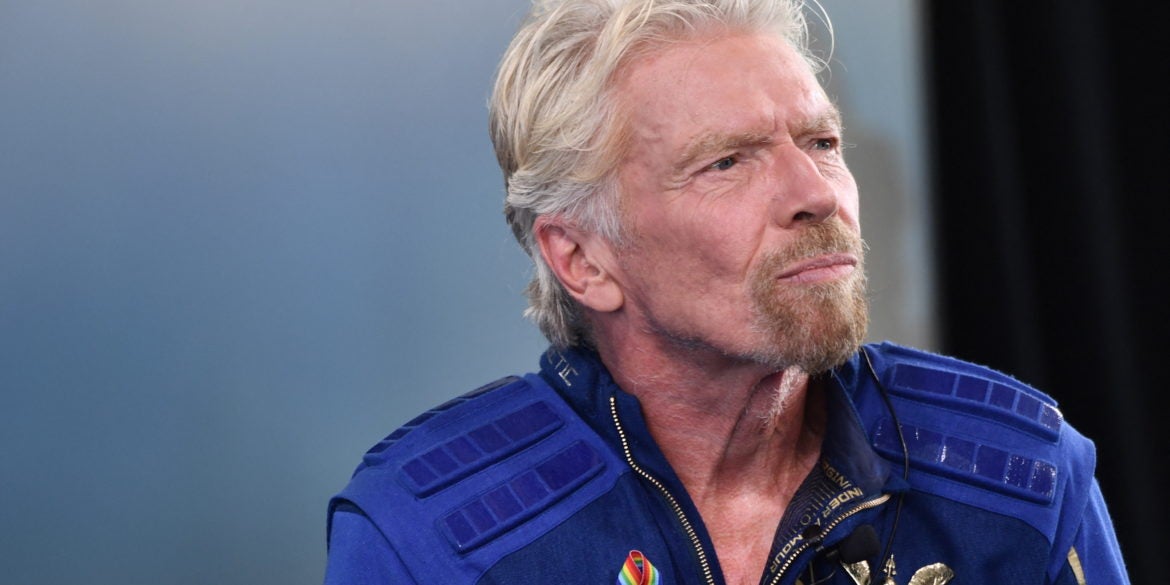 Sir Richard Branson speaks after he flew into space aboard a Virgin Galactic vessel, a voyage he described as the "experience of a lifetime" -- and one he hopes will usher in an era of lucrative space tourism at Spaceport America, near Truth and Consequences, New Mexico on July 11, 2021. - "Congratulations to all our wonderful team at Virgin Galactic for 17 years of hard, hard work to get us this far," he said during a live feed as the VSS Unity spaceship glided back to Spaceport America in New Mexico.It reached a peak altitude of around 53 miles (85 kilometers) -- beyond the boundary of space, according to the United States -- allowing the passengers to experience weightlessness and admire the Earth's curvature.The trip proceeded without drama, and touchdown occurred at around 9:40 am Mountain Time (1540 GMT), about an hour after take-off. (Photo by Patrick T. FALLON / AFP)

The eccentric septuagenarian founder of Virgin Galactic arrived before dawn at Spaceport America, built in large part at his initiative, in the US state of New Mexico.

The sun rose on the building’s futuristic glass facade, located in a region that boasts 340 days of good weather per year.

A small crowd of invited guests, baking under the hot sun, cheered as the space crew climbed into a black SUV and headed for the rocket, which sat at the end of a 3.6 kilometer (2.2 miles) track. Onboard were Branson, two pilots, and three other Virgin Galactic employees.

Also on hand, though unseen by the cameras, was SpaceX founder Elon Musk, another billionaire with galactic aspirations.

A TikTok star, a celebrity television presenter, and a Canadian astronaut were among those poised, ready to commentate on the momentous event.

After the launch, the huge carrier plane climbed through the air for about 50 minutes. The guests took refuge under a white tent, eating passed hors d’oeuvres while children ran about.

But they soon rushed back out again to witness the main event: the spaceship released from the plane, igniting its engine for a supersonic ascent to shouts of joy from the Earth-bound watchers.

“Welcome to space!” the commentator announced a few minutes later, just before the ship began its descent.

Branson’s face filled the big screen, streamed in from the rocket: “I was once a child with a dream, looking up to the stars. Now I’m an adult in a spaceship!” he said to the crowd.

– Wings and free tickets –
As the ship came back to Earth, Khalid took to the stage. Millions of listeners tuned in to hear him debut his newest song, “New Normal” — a wink towards future space tourism.

Once the landing was complete and the rocket parked only a few meters from the stage, Branson arrived.

After hugging his family, he stepped up on the platform to give out their astronaut wings, official Federal Aviation Administration pins shaped like wings to symbolize their new status as astronauts.

Branson then popped open the champagne, liberally spraying it over himself and his crewmates before drinking it straight from the bottle.

The consummate showman, he also unveiled a competition for space enthusiasts to win two free tickets on Virgin Galactic flights through the website Omaze — and a personal guided tour of Spaceport America.

“I promise lots of chocolate,” he joked, comparing himself to Willy Wonka, the Roald Dahl character. “We’re here to make (space) accessible to all.”