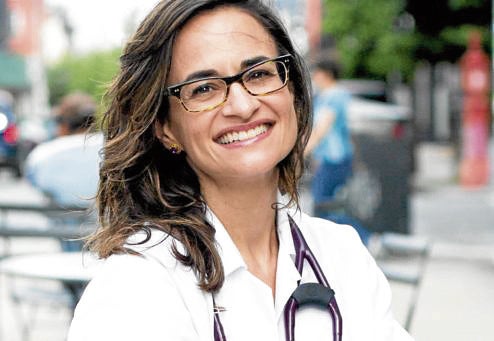 ‘There were no fat Asians in the past . . . But in the last 20 years, they’ve doubled their fat and animal food intake’

Over a decade ago, I went out with a friend who ate only the toppings from her pizza and junked the crust because she was avoiding carbs. A few years later, she was scraping the cheese and meat off her pizza and eating only the crust and what vegetables were on top of it (her idea of going plant-based).

When Dr. Michelle McMacken lectures to the medical community, she advises them not to talk to patients about carbs, fats or protein. Instead, she tells them to talk about food, because all food have some degree of the macronutrients, so it isn’t useful to talk about food as if that’s all it is.

“This makes it really clear. Because the way ‘carbs’ is used these days can be confusing: The so-called bad ones are the muffins, candy and other refined starches, but complex carbohydrates like sweet potatoes get lumped together in that same category,” she said at the 2020 Truth about Weight Loss summit.

McMacken is a plant-based nutrition advocate committed to educating patients, doctors and the public about the power of healthy eating and lifestyle modification.

Cutting down on rice

“How can you possibly say rice makes you fat? There were no fat Asians in the past, looking at old footage from various countries. They ate a lot of white rice,” said John McDougall, MD, in the same summit.

“But in the last 20 years, they’ve doubled their fat and animal food intake, especially the richer ones,” he added.

In his best-selling book, “The Starch Solution,” McDougall laid out why it’s the right food designed for humans to eat.

Unlike in other animals, the human body is not efficient at converting sugar into fat. Fats differ, but if a biopsy is done on a person’s body fat, it would show one-to-one: What they eat is what’s in their body.

“Carbs shut off the hunger drive appropriately as it is satisfied. No starch, no satiety. Fat doesn’t turn the hunger drive off. Gladiators were vegans and ate barley and beans. Endurance event marathoners eat corn,” said McDougall.

“People love hearing good news about their bad habits. But the fat you eat is the fat you wear,” he added.

He clarified that we do need fats, especially those we can’t make, like essential fats, as these are only made by plants.

But he emphasized that the same diet that’s making people fat and sick is the same one endangering the world.

The same pizza-confused friend—despite having read about the virtues of a vegan lifestyle—still insists on eating animals sometimes “because the Bible said so.”

“The Bible, the Quran, they never thought factory farming would be the norm. People make a lot of money downstream from you getting sick, and it usually takes decades to kill you. Just like cigarette smoking, you might ‘beat the odds,’” said McDougall.

Working out doesn’t directly lead to weight loss either.

According to McMacken, exercisers just tend to feel like they want to take better care of themselves so they tend to eat better.

So how does one get rid of carbophobia while trying to lose weight?

McMacken recommended demystifying it by reading to build more awareness, getting inspiration from success stories, and watching documentaries. Start with “Forks Over Knives” (2011), “What the Health” (2017) and “The Game Changers” (2018).

Support from one’s friends and family is also important so everyone is unified about the plan for sustainable weight loss.

She suggested joining local kickstarts or social media groups to be around like-minded people.

The struggle is sharing a house with people who still want to eat what you want to avoid.

McMacken stressed the need to get really creative in making your food environment safe and supportive for you: Out of sight, out of mind.

She encouraged beginning with acceptance and compassion for yourself, not anger. Set granular goals, like removing the candy bowl from the office. Concentrate on behavior changes instead of weigh-ins.

McDougall latched on to something bigger than vanity: “How do you want to be remembered? I don’t want my grandchildren to ask, ‘Grandpa, why didn’t you try harder? You left us with no world to live on.’ So try to give them a world that is worthwhile. Try harder. We have the facts. We have a personal responsibility, and it begins with the next bite you take. Make a major contribution. Eat unrefined rice, corn, potatoes, greens and fruits.” —CONTRIBUTED