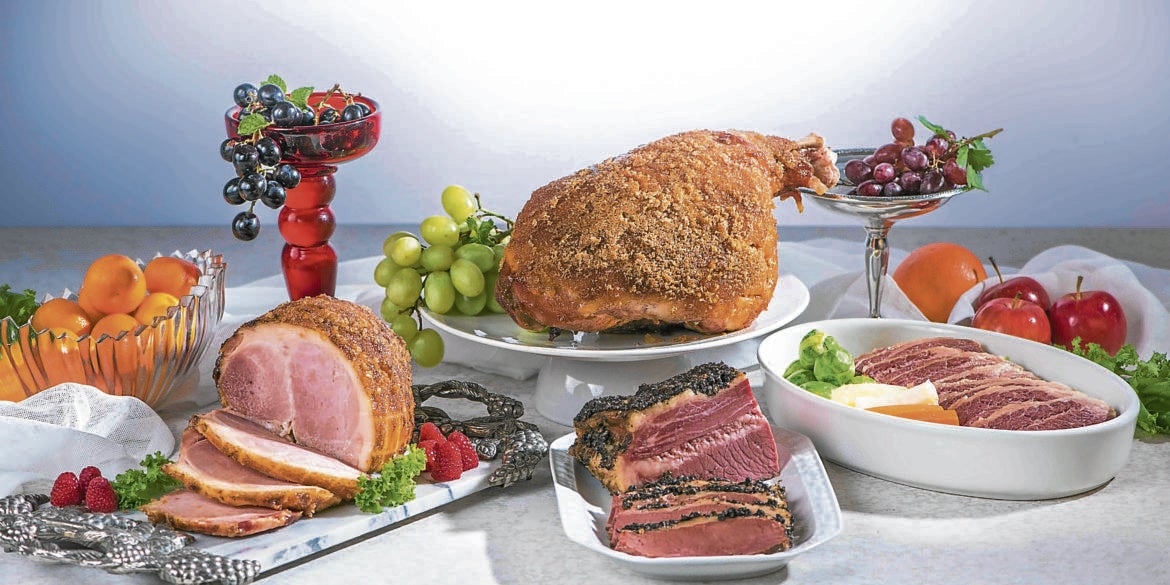 Old-time favorites from The Plaza now available to go

It’s that time of year when baked Virginia ham takes center stage. Here’s the story of how it came to be, a tribute to the family that created it and has contributed greatly to Philippine gastronomy.

The Plaza Restaurant Complex and Convention Center, built in the 1960s, housed five themed restaurants, a cocktail lounge, seven meeting rooms and a presidential hall that could comfortably seat 800 people.

It was the brainchild of Joe Reyes, son of Justice Alex and Aristocrat’s grande dame Doña Engracia Reyes.

Ahead of his time, Joe was behind the first smorgasbord (buffet) that he introduced through The Plaza Royale, one of the five restaurants. There was The Plaza Airways, a fancy airplane-themed restaurant where customers could pretend to be passengers on an aircraft and be served on airline trays. The menu consisted of a cold dish, a hot dish and dessert, all for P30.

The other restaurants at the complex were The Branding Iron Steak House, the French-themed Plaza Café and the Chinese restaurant Willow Court. The Plaza Complex was the place to be. It became the venue of choice for affairs, big and small.

The Plaza Catering was born of the insistent demand of clients to savor “The Plaza experience” within the confines of their homes.

Their very first off-site affair was grand, indeed, at Malacañang Palace, where they served 3,000 people for the summit conference with then US President Lyndon B. Johnson.

Since then, The Plaza has made entertaining at home a breeze.

During the tourism boom of the ’70s, The Plaza became a major tourist attraction. It was where visitors from all over the world came by the busload to enjoy Philippine culture through music and dance, and indulge in culinary delights from the well-prepared Plaza buffet.

It was a glorious time. With three shows a night, The Plaza complex was bustling, hosting a thousand people a day.

One of the most recognized dishes served by The Plaza is the baked Virginia ham that is carved before your very eyes. It was the star of their buffet. The idea was conceived by Meldy Reyes, Joe’s wife, and The Plaza’s Swedish master chef Gosta Pettersson.

The grandeur and the flavors of the golden days have been kept alive by Joe and Meldy’s daughter Millie and her daughter Karla.

Not even a pandemic can stop the Reyeses!

Of late, The Plaza has come alive with their specialties to-go: frozen or prepared for you, ready to eat. On the menu are many of the dishes that debuted in the ’60s, like Chicken

à la Kiev introduced by chef Gosta. The dish became so popular that their chef even starred in his own butter commercial.

An impromptu, intimate get-together is not a problem with The Plaza Classics. Choose from their takeaway party packages that feature the Baked Norwegian Salmon and Boiled Corned Beef Set, or the Roast Beef spread with everything on and with it or Spanish favorites.

They have even made pig knuckles—boiled or fried—available! Done either way, they’re delicious!

I am a nostalgic eater, and I love food that warms my heart, the kind that evokes memories, and for me The Plaza hits the spot. It was food I grew up with as they catered to many of my parents’ parties.

For those who didn’t know, The Plaza, was my home, too. Back from Europe in my early 20s, I was taken in by Millie. It was where I worked as a catering consultant and where she allowed me the freedom to cook, create and present my food to her clients. For this, I will forever be grateful. (Tel. 77290001-03, 88908446)

In the mid-’60s, Joe and chef Gosta got the inspiration for the boiled corned beef from the popular New England dinner consisting of boiled brisket of beef with assorted vegetables. It became one of their bestsellers.

Instead of serving it traditionally, why not get a slab of The Plaza Corned Beef and make Corned Beef Sinigang, a recipe shared by Karla Reyes?

1 radish, peeled and cut into rounds

Wash the tamarind, place in a pot and add water to cover. Bring to a boil and then simmer until tamarind is tender. Peel, remove seeds and strain. Use this as your soup base.

In another pot, saute onions and tomatoes then add the tamarind soup base and continue to boil the other vegetables. First, the taro and radish, then okra and string beans. You may add the cooked The Plaza Premium Corned beef into this. Lastly, add the kangkong or water spinach. Stir, turn off heat and cover. The steam will cook the kangkong in no time.