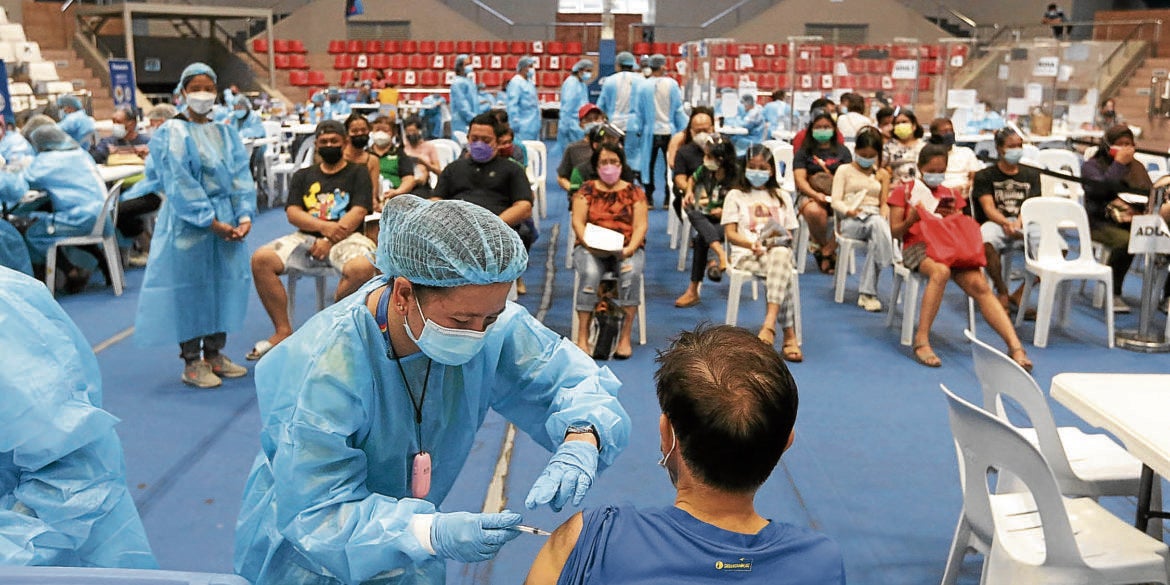 A senior receives a booster shot of the COVID-19 vaccine in Makati on Nov. 23. —MARIANNE BERMUDEZ

The 1st COVID-19 Summit of US and PH physicians addresses confusions about the virus and the vaccine. Here are excerpts

On Nov. 25, the Concerned Doctors and Citizens of the Philippines (CDC PH) organized the first Philippine COVID summit to discuss pressing issues confronting us in the management of COVID-19.

The combined faculty coming from the United States and Europe shared recent scientific data, their clinical experiences and insights for a better understanding and effective management of the disease.

It included doctors Pierre Kory, Peter McCullough, Sabine Hazan-Steinberg, Marivic Villa, all practicing and based in the United States; and Romy Quijano, Allan Landrito and myself from the Philippines.

Practical questions were tackled during the whole-day event, and we’d like to share some of these questions here.

Is COVID-19 really that deadly to deserve the phobic response some people are giving it?

Villa, who’s practicing pulmonary medicine, intensive care and functional medicine in Florida, explained that COVID-19 is treatable, so long as it’s treated early enough. Unfortunately, many wait until they’re severely sick before they see a doctor.

Villa’s practice caters to a village of retirees in Florida, but she’s happy that none of her countless COVID-19 patients required hospitalization.

An extreme fear of the disease can only lead to worse outcomes, so it’s best to maintain an objective, healthy attitude about COVID-19. It’s a disease we should be alarmed but not phobic about.

As we keep on saying in this column, the choice of mindset—whether a victor’s or a victim’s—is yours to make, and can determine whether you’ll lick COVID or it licks you.

Although no one in the panel thought that a well-managed COVID-19 outbreak could lead to numerous fatal outcomes, we expressed some concern why health officials are not analyzing seriously and explaining to the public why the Philippines is showing a paradoxical increase in deaths despite the 93-percent decrease in new confirmed cases, from peak levels of more than 20,000 new cases daily more than two months ago.

At the peak of the last surge, the weekly daily average of deaths was 153 daily. This number of people dying has slowly increased, despite the marked drop in new cases.

As of Nov. 21, the weekly average is more than 200 deaths daily, hitting more than 300 deaths on some days, though the new cases have been markedly reduced to only 1,200 cases daily.

When you compute for the case fatality risk (CFR), which is a crude manner of estimating disease severity and assessing our effectivity in managing cases, the CFR has increased from 0.7-percent weekly average during the mid-September peak to 16.7 percent as of Nov. 25. That’s a 22-fold increase in the percentage of patients dying, but nary an explanation from the authorities why, all of a sudden, local COVID patients are dying more. Is the virus getting more virulent? Is there something wrong with the way we manage our patients?

Unless we identify the cause for this—whether it’s just a statistical fluke or a chance occurrence or some real problems—we won’t know how to properly address it to prevent more Filipinos from dying.

If one gets infected, what’s key to surviving it?

Kory and McCullough stressed that early treatment is key. Recognizing symptoms early, and taking treatments that have been shown to be effective in preventing multiplication of the virus and the cytokine storm that it triggers, can go a long way in improving outcomes even in high-risk individuals.

The two experts, as well as Villa and Hazan-Steinberg, are all members of the Front Line COVID-19 Critical Care Alliance (FLCCC), which regularly updates physicians worldwide on cost-effective and commonly available treatments. They were among the first to advocate the use of ivermectin in COVID-19, and have urged national governments to include ivermectin in their prevention and early treatment kits. Countries like India, Indonesia and Japan heeded the advice and are now enjoying a near-COVID-free status, with zero deaths and zero new cases on some days.

Aren’t our authorities interested in what might have been the game changer in these countries? They all have one thing in common. They allowed the use of ivermectin when the cases were going through the roof and, in three weeks, the new cases and deaths went down to really low levels.

Is it safe to breastfeed when the mother has just been vaccinated?

Villa, Quijano and Landrito do not advise it. Villa cites two of her patients in Florida who continued to breastfeed their 2- and 4-month-old babies after vaccination. The babies developed febrile illness which were unresponsive to treatment. They were diagnosed to have a multisystemic inflammatory disease, and she said that the role vaccination played could not be ruled out. Unfortunately, both babies died.

The spike protein is part of the virus that the vaccines make the body produce in big quantities after vaccination. Although it was believed to just stay localized in the injection site of the vaccine, there’s mounting evidence that the billions of spike proteins produced by the body actually circulate and lodge in the various organs, and in the case of breastfeeding mothers, they could be passed on to the babies. Spike proteins are now believed to be the culprits that cause tissue and organ damage either from an actual infection, or from vaccination.

Certainly not, according to Quijano, a retired professor from the University of the Philippines College of Medicine. He is an expert in pharmacology and pharmacovigilance, the science that monitors the effects of various medicines when they’re made available to the public.

He explained that one would not like to get blood where spike proteins are circulating in abundance. Such would only be justifiable in acute emergencies, as in the case of shock due to massive blood loss, but in nonemergency cases. Quijano advised them not to agree to receive blood from people who were vaccinated.

He advised the National Red Cross and all blood-bank institutions to strongly consider not accepting blood donations from fully vaccinated individuals until it could be ruled out that there are no more circulating spike proteins in the donor’s blood. He dreaded the day when the blood banks would run out of blood because everyone will be vaccinated and could not donate blood anymore.

Can vaccines increase the risk of a heart attack?

There has been a lingering but unproven fear that vaccines produce spike proteins that may cause problems in the lining of arteries and veins, promoting the development of blood clots. The resulting heart attack or stroke may not be immediate, but may happen in the next several years.

Last week, this concern was proven to have scientific basis. The Circulation Journal, the official journal of the American Heart Association and one of the most credible sources of new scientific data on cardiovascular medicine, published a well-conducted study by Dr. Steven Gunsry that evaluated the overall cardiovascular risk of vaccinated individuals to develop a heart attack in the next five years.

Using the PULS Cardiac Test, a simple test that predicts the likelihood of having a heart attack in five years, the researchers have shown more than a doubling of the risk. The test reflects the severity of the inflammation happening in the arteries and the likelihood that an atherosclerotic plaque might rupture causing thrombosis (blood clots).

Health officials should weigh this new data and exercise an abundance of caution in vaccinating all regardless of the risk. Any treatment that can cause more than a doubling of the risk of a heart attack is definitely not acceptable.

The first COVID-19 summit provided a lot of new information and insights for a more effective management of patients. We’d like to thank and congratulate the organizing committee headed by Dr. Homer Lim (CDC PH president) and other CDC PH officers including Ana Cuisia, Juan Elizalde, Mari Kaimo, Francis Abraham and Lovely Rivero.