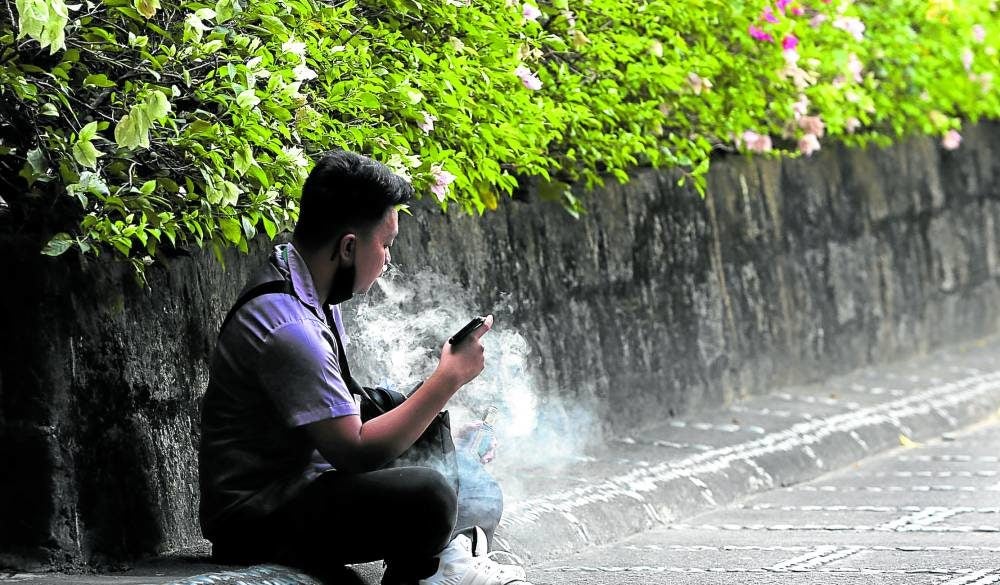 Breaking the vicious habit of smoking is more complex than it seems. The use of vaporized nicotine products could serve as a pragmatic middle ground to wean smokers off their addiction to cigarettes. —LYN RILLON

Our 75-year-old longtime patient, a retired public relations practitioner, came for a follow-up last week and told us the good news that he has finally licked his nicotine addiction and has been off any form of smoking for almost three months already.

He had been smoking since high school and has attempted to quit more than a dozen times. But even after he had a heart attack 10 years ago, he was only able to abstain for six weeks at most, and was soon lighting his cigarette once more.

We’ve employed all known interventions at smoking cessation for this patient, from nicotine gums and patches to behavioral counseling, and even tried acupuncture for a few sessions, but with only transient success. The nicotine addiction would seemingly come back with a vengeance, and he was smoking more than he did before. He was really one of our problematic recalcitrant smoker patients, and we almost gave up on him.

Last year, we allowed him to try a heated tobacco product as smoking alternative. He was able to gradually reduce his cigarette smoking from two packs a day to less than 10 sticks a day within a month.

And after around seven months’ use of the smoking alternative, which satisfies the nicotine craving but delivers much fewer harmful substances from burnt tobacco, he discarded his cigarettes for good. He has also stopped using his alternative smoking device for almost three months now.

He was finally liberated from more than five decades of nicotine addiction.

He says he’s now able to breathe more freely, and tolerate more activity without huffing and puffing. He now tells his other friends who still smoke that it’s never too late to quit. One can still benefit from quitting smoking even if one has been smoking for decades like him.

It is for smokers like our patient that we support the vape bill, which was already approved by both houses of Congress. One thing this particular patient of ours said that touched us was, “when you’re after the welfare of your patients, no one can question your motives and your integrity.”

When we decide which side we should favor between two opposing choices, we tend to go by the choice advocated by proponents perceived to have integrity. Indeed, one of the most sought-after qualities of people or organizations nowadays is integrity.

People, for example, relied on the efficacy and safety of COVID-19 vaccines based on the integrity of their manufacturers. Now that there are questions about some manufacturers’ transparency in disclosing reported side effects, distrust and vaccine hesitancy increase.

People are also looking for candidates with integrity as they prepare to cast their ballots on May 9. Candidates found to be investing in troll farms that purvey fake news and half-truths are perceived to have tainted integrity and are deemed unworthy of the people’s trust.

We highlight this important quality of integrity due to recent news of two well-meaning and dedicated public service-oriented groups exchanging accusations of the other party spreading misinformation and, worse, “fake news,” regarding the vape bill.

Somehow, our group has been caught in the crossfire of hurled accusations and peddled misinformation, and we’ve also been accused of promoting smoking and enabling minors to try vaping or other alternative types of smoking. Nothing can be further from the truth.

In our previous columns, we clarified our position. We believe that vapor products and heated tobacco products (HTPs) could serve as a pragmatic middle ground to wean smokers off their addiction to cigarettes—the most dangerous nicotine product.

We remain steadfast on this position and feel it is our duty to examine further the vape bill and how it can help improve the lives of around 16 million Filipino smokers.

We have always been staunch antismoking advocates and we categorically say we remain so. We’ve written numerous commentaries and delivered countless lectures on the evils of cigarette smoking, and we have supported tobacco control measures such as raising tobacco sin taxes and promoting smoking ban in public places. It is with the utopian dream to banish cigarette smoking in this planet that we support the properly regulated use of alternative tobacco products. In short, we remain deeply committed and loyal to the cause of tobacco control in the Philippines, and we don’t see any conflict if we support the use of vaporized nicotine products (VNPs) such as electronic cigarettes (e-cigs) and HTPs, as smoking cessation tools to wean our smoker patients from their nicotine addiction.

We can say from personal experience with our patients that the use of VNPs are more effective in weaning them from cigarette smoking than the other nicotine replacement therapies like gums and patches that we’ve been using for the longest time.

Supporting VNPs doesn’t mean we are now on the same side as the merchants of death—the cigarette industry. On the contrary, our passion and dedication to helping save the lives of millions of Filipino adult smokers remain strong and in fact reinvigorated because of the technological disruption happening in the tobacco industry.

Through science and innovation, there now exist tobacco products that do not burn tobacco and have therefore eliminated the primary cause of smoking-related diseases—the combustion or burning of tobacco. Because they do not involve combustion of tobacco, they produce much less harmful chemicals and, in effect, reduce significantly the exposure of its users from the harmful and toxic substances in burnt tobacco.

We emphasize, though, that the VNPs are not 100-percent safe, but they’re much less harmful than cigarettes.

In one of the systematic reviews and meta-analyses our research group at the Fame Leaders Academy conducted, the biomarkers of exposure for known toxic elements in cigarette smoking are much less in those who use HTPs. It’s fair to assume that if one gets 60- to 95-percent less exposure to known toxic and potentially harmful elements resulting from burnt cigarettes, this should translate to a better long-term health outcome, especially if the smoker finally quits smoking for good.

The lawmakers who helped pass the vape bill both in the House of Representatives and the Senate were clear on their objective—help smokers quit by providing them access to a regulated less harmful tobacco and nicotine product. It was not therefore hard for antismoking advocates like us to support the proponents of the vape bill.

Meanwhile, the primary objective of tobacco control advocates in the Philippines is also to help smokers by ending the unnecessary suffering and premature death caused by cigarettes. In this advocacy, the main stakeholder is again the smoker who needs all the care and assistance in his or her journey toward quitting smoking of cigarettes.

In short, there is a common ground between those in Congress who support the vape bill and the tobacco control advocates who continue to push for tobacco control measures that protect the youth, such as adopting smoke-free environments and raising the minimum age law, i.e. protecting the citizens from the hazards of smoking.

It is because of this common ground that we have also expressed our support to the cosponsor of the vape bill—Asosasyon Sang Mangunguma Nga Bisaya-Owa Mangunguma Rep. Sharon Garin, who was also a member of the bicameral panel that approved the vape bill.

To have a full grasp of the bill, we requested a copy of the ratified bicameral conference committee report of the vape bill from Garin’s office, which she kindly provided.

Next week, we’ll discuss the highlights of the updated version of the vape bill and why we believe the regulatory provisions are sufficient to protect the youth and to ensure the proper marketing and sales of VNPs. INQ