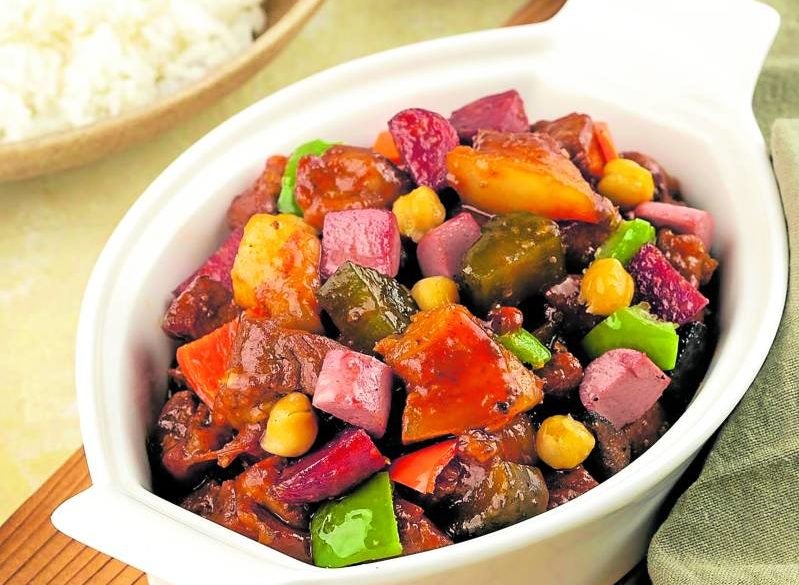 The language of love of the Mojicas is food.

Cooking it, churning it into a successful business and preserving family recipes, the Mojicas have kept their own culinary traditions not just alive but thriving.

Their new venture, called Casa Mojica and situated in Marikina, is a restaurant that highlights dishes served during family Sunday lunches.

The structure of the restaurant itself was, at some point, the family’s residence and office, and has been transformed into a spacious and bright eatery, with an old garden and in-the-works koi pond to serve as a venue for outdoor functions.

Victoria Mojica hails from Pampanga, has seven children and was born a natural cook, having inherited her skills from her mother, Flordeliza de Leon.

It is her food, cooked according to the liking of her brood, that she wishes her guests to savor at Casa Mojica.

I was told it was quite a challenge to cook for a huge family, as each member had their own distinct taste and personal preference.

Only a few weeks old, the R&D team has been busy tweaking their dishes, perfecting them, as well as creating new and reinventing old ones.

It was their bibingka cheesecake, sent to me by my dear friend Irma Rivera, that brought me to dine at Casa Mojica.

Refashioning the rice cake into a cheesecake seems to be in vogue these days. Of the many I’ve sampled, theirs emulates the rice cake the most. Its curdy texture makes it closest in mouthfeel to the original. Though, of course, being a cheesecake, this is smoother, much richer and eggier.

The flavor lent by the perfectly charred banana leaves is so pronounced that it adds greatly to the overall palatal experience of the bibingka; the sugar sprinkling, the grated cheese and the thick wedges of salted egg further enhance it.

As I sat at the table, I was greeted with a glass of sago’t gulaman with tanglad, and it was refreshing.

When the main dishes came, I was enamored by their Everlasting.

There’s a portion on their menu, by the way, that pays homage to specialties of the shoe capital of the Philippines, particularly Everlasting and Waknatoy, also known as Menudong Marikina.

The former is their famous rendition of meatloaf made from ground pork, chorizo, peppers, raisins, bell peppers, carrots and sweet pickle relish, adorned with pineapples and boiled eggs. Of this meatloaf, each Marikeño or Marikeña has his or her own version.

The one made at Casa Mojica is, however, different from most others. It is so much more decadent, wrapped with bacon and capped with a thick slice of torched cheese. It was intimated to me that the Mojicas love everything with extra cheese.

It is served with banana catsup and I loved it, so delicious in its simplicity.

Their sisig exudes a smoky aroma, and comes with lots of grilled liver.

The kare-kare was fall-off-the-bone, a specialty of Lola Flordeliza. It was very homemade in taste, with a sweetness in the finish. My eldest sister, Manang Aida, liked their gising-gising.

With much excitement, the owners told us of their specialty, that you can order in-house for large groups or for takeaway—that’s their lechong baka. A 30-plus-kilogram leg is marinated and slow-roasted for hours. Carved on the spot, theirs, they say, is different as it is made tocino-style.

From the lechon baka bones, the chefs make deep-flavored bulalo, cooked for no less than eight hours.

This newly built restaurant in Marikina will, in time, be a destination for family-style meals. Though recently inaugurated, I can see its potential.

Once the Mojicas surpass the challenges that come with a new restaurant, I predict only better days ahead for Casa Mojica.

Add 2 cups of water, bring to a boil and simmer in medium heat for 40 minutes, and then add the other ingredients: pork liver, chorizo de Bilbao, Vienna sausage, tomato sauce, garbanzos, and red and green bell pepper. Then simmer again for another 30-40 minutes in low fire.

You can set aside red and green bell pepper for garnish. Finally, add the achuete oil and season with salt and pepper to taste.