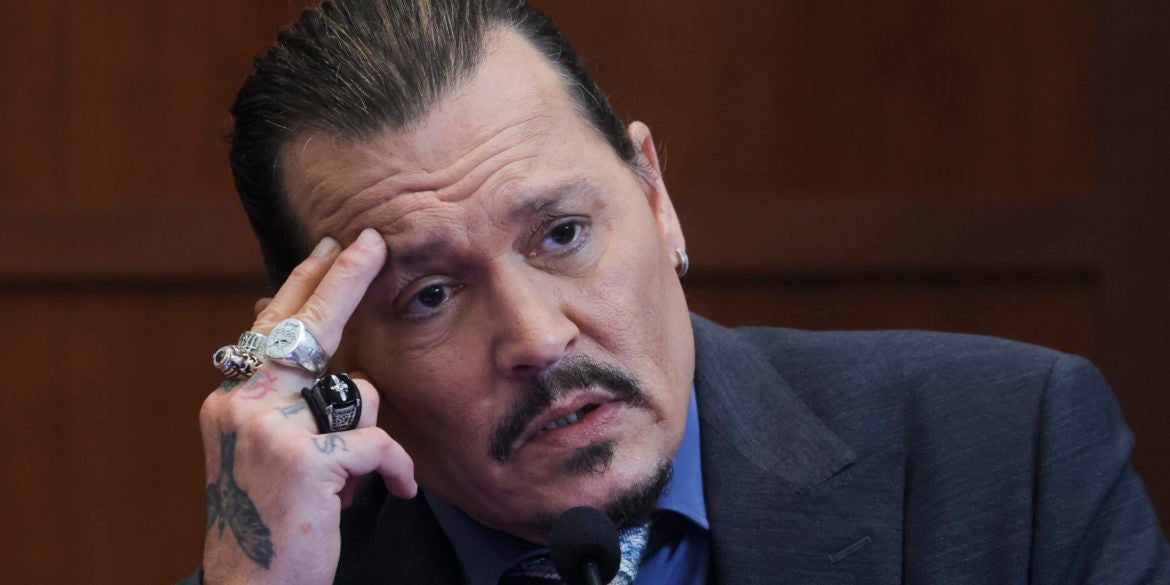 Actor Johnny Depp testifies at the Fairfax County Circuit Courthouse in Fairfax, Virginia, on May 25, 2022. - Actor Johnny Depp is suing ex-wife Amber Heard for libel after she wrote an op-ed piece in The Washington Post in 2018 referring to herself as a public figure representing domestic abuse. (Photo by EVELYN HOCKSTEIN / POOL / AFP)

Actor Johnny Depp testified on Wednesday at his defamation trial against his ex-wife Amber Heard that it has been “unimaginably brutal” to listen to her “heinous” accusations of domestic abuse.

“No human being is perfect, certainly not, none of us, but I have never in my life committed sexual battery, physical abuse,” the 58-year-old Depp said.

Taking the witness stand as the six-week-long trial in Fairfax, near the US capital, nears an end, Depp was asked by his lawyers what it has been like to listen to Heard’s testimony.

“It’s insane to hear heinous accusations of violence, sexual violence, that she’s attributed to me,” the Pirates of the Caribbean star said. “All these outlandish, outrageous stories of me committing these things.

Depp said he brought legal action because he needed to address “what I’ve been carrying on my back, reluctantly, for six years.”

The 36-year-old Heard, who was married to Depp from 2015 to 2017, obtained a restraining order against her then-husband in May 2016, citing domestic violence.

Depp, a three-time Oscar nominee, filed a libel suit in London against British tabloid The Sun for calling him a “wife-beater.” He lost that case in November 2020.

Depp brought suit against Heard in Fairfax over an op-ed she wrote for The Washington Post in December 2018 in which she described herself as a “public figure representing domestic abuse.”

The Texas-born Heard did not name Depp in the piece, but he sued her for implying that he was a domestic abuser and is seeking $50 million in damages.

Heard, who had a starring role in Aquaman, countersued, asking for $100 million and claiming she suffered “rampant physical violence and abuse.”

During the trial which began April 11, Heard testified about multiple instances of alleged physical and sexual abuse by an intoxicated Depp, including being sexually assaulted with a bottle while they were in Australia.

Depp claimed Heard was the one who was frequently violent during their relationship and once severed the tip of one of his middle fingers by throwing a vodka bottle at him.

British model Kate Moss, Depp’s ex-girlfriend, also testified on Wednesday and dismissed reports the actor once threw her down a flight of stairs.

“He never pushed me, kicked me, or threw me down any stairs,” said Moss, appearing as a rebuttal witness on behalf of Depp.

Heard, during her testimony, mentioned reports that Depp was alleged to have once pushed Moss down some stairs.

That reference provided an opening for Depp’s lawyers to call Moss and she testified by video link from England.

She was asked about an incident that occurred during a vacation the couple took to a resort in Jamaica.

“There’d been a rainstorm and as I left the room, I slid down the stairs and I hurt my back,” Moss said. “He came running back to help me and carried me to my room and got me medical attention.”

Another of Depp’s former girlfriends, the actress Ellen Barkin, testified last week and described him as jealous, controlling, and “drunk a lot of the time.”

Barkin said he once threw a wine bottle in his hotel room in Las Vegas after an argument with a friend or an assistant.

After being sued for defamation, Heard filed a countersuit, citing allegedly defamatory remarks made about her by Depp’s former attorney, Adam Waldman.

Both sides have claimed damage to their Hollywood careers.

Heard’s legal team presented an entertainment industry expert who estimated that the actress had suffered $45-50 million in lost film and TV roles and endorsements.

An industry expert hired by Depp’s side said the actor has lost millions because of the abuse accusations, including a $22.5 million payday for a sixth installment of “Pirates.”