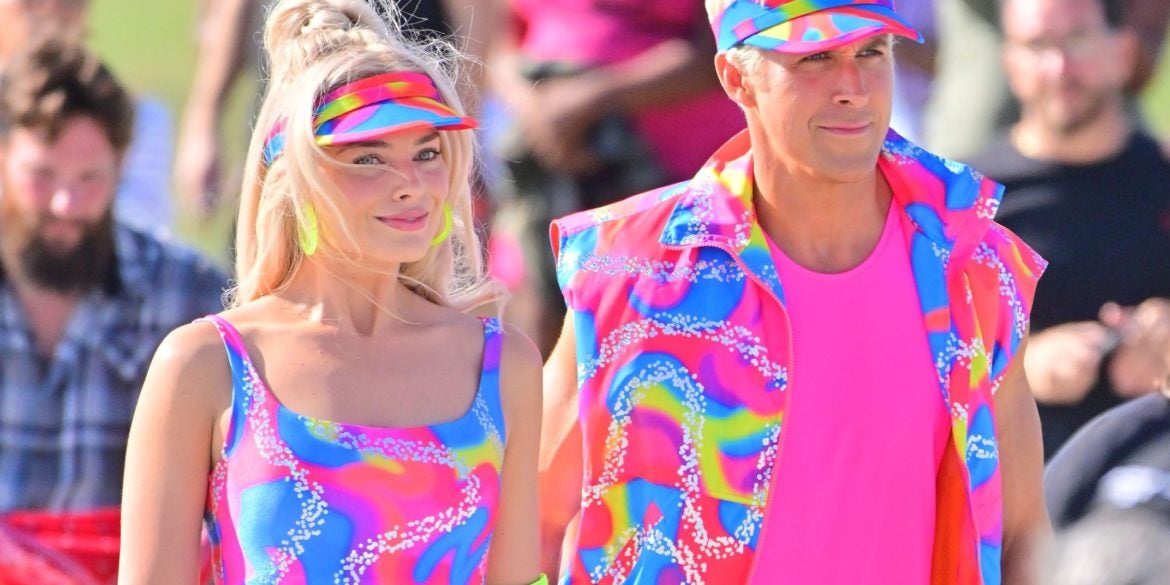 Hype around the new live-action Barbie movie is mounting as pictures of stars Margot Robbie and Ryan Gosling in character as Barbie and Ken have leaked onto Instagram and Twitter. The pair decked out in gnarly hot pink pantsuits, matching neon roller skates and 80’s leotards, and bleach blonde hair are a welcome sign of life after having nothing but radio silence around the production.

Margot Robbie and Ryan Gosling spotted on the set of ‘Barbie’ as they continue filming in LA 2022 pic.twitter.com/qHZKrBhVr1

While still a year away from arriving at the box office—Warner Bros.’ Pictures confirmed at CinemaCon 2022 in Las Vegas that the upcoming live-action comedy is set to have its theatrical release on June 21, 2023—the film is currently seeing a spike in attention, similar to the hype the movie found last year after it was announced that Greta Gerwig would be directing the film (her third ever directorial project after Lady Bird and Little Women) and writing it with input from Noah Baumbach (writer of critically-acclaimed 2019 American comedy-drama Marriage Story). Here are a few things you might not have known yet about the upcoming Barbie film:

A Barbie Film Franchise has been a Long Time coming

Talks for a live-action film franchise around Mattel’s staple toy have been in circulation for almost a decade now. Beginning with Sony Pictures striking a partnership with Mattel for the venture in 2014, the idea saw it being handled by a completely different cast and crew until Warner Bros.’ took the reigns some few years after. It’s surreal to imagine how the movie might have gone a completely different route if it stuck to its original handlers!

Co-writing the screenplay are Greta Gerwig and Noah Baumbach who – for those unaware – happen to be married in real life! Domestic partners and longtime collaborators, Gerwig and Baumbach’s joint works so far have been indie flicks like Frances Ha, Mistress America and Greenberg. Barbie (2023) will mark the duo’s first collaboration on a scale much larger than their past indie titles.

Margot Robbie was not the OG pick for the movie

Comic and actress Amy Schumer was set to play the blonde title character in the production’s early years until she opted out of the role in 2017 citing scheduling conflicts. Anne Hathaway was also considered for the same role.

You will recognize at least one face from Gerwig’s ‘Barbieverse’

Aside from Margot Robbie and Ryan Gosling playing our main Barbie and Ken, reports say we’re set to see Issa Rae (Insecure), Hari Nef (You), Alexandra Shipp (Tick, Tick … Boom!) as other iterations of Barbie, while Simu Liu (Shang-Chi) and Ncuti Gatwa (Sex Education, Doctor Who) will be playing other iterations of Ken. Emma Mackey, Sex Education star and well-documented doppleganger of Robbie, is also on board for filming which has fans speculating her role to be either yet another Barbie or the doll’s younger sister, Skipper. Little has been revealed of the plot, but fans have taken to piecing together the film’s story through what has been revealed of the cast list and off-set shenanigans the cast gets up to (see: Liu’s painful retelling of a full-body wax he had to get for his role and Mackey’s huge bomb about a ‘Barbie sleepover’) Other names to be excited about are America Ferreira (Ugly Betty), Kate Mckinnon (SNL), Michael Cera, and Will Ferrell.

In a development nearly a decade long, this franchise adaptation has been passed all around Hollywood, but it is recent decisions on the production staff and cast that have been integral to capturing the attention of cinephiles all across the internet. And rightly so. Feminist auteur Gerwig, to the credit of her films Lady Bird and Little Women, has shown a keen ability to take straightforward premises and harvest every lesson that can be harvested through complex and brilliantly-explored characters. Pairing this with Margot Robbie, who is not only starring in but producing the film under her production banner LuckyChap Entertainment, we’re excited to be treated to a depiction of Barbie through a feminist gaze—one that does not shy away from the more questionable aspects of the doll’s legacy, making a story that is inclusive, and possibly an adaptation that brings Barbie’s role as an influence on generations old and new into a contemporary, empowered, and socially-aware age.