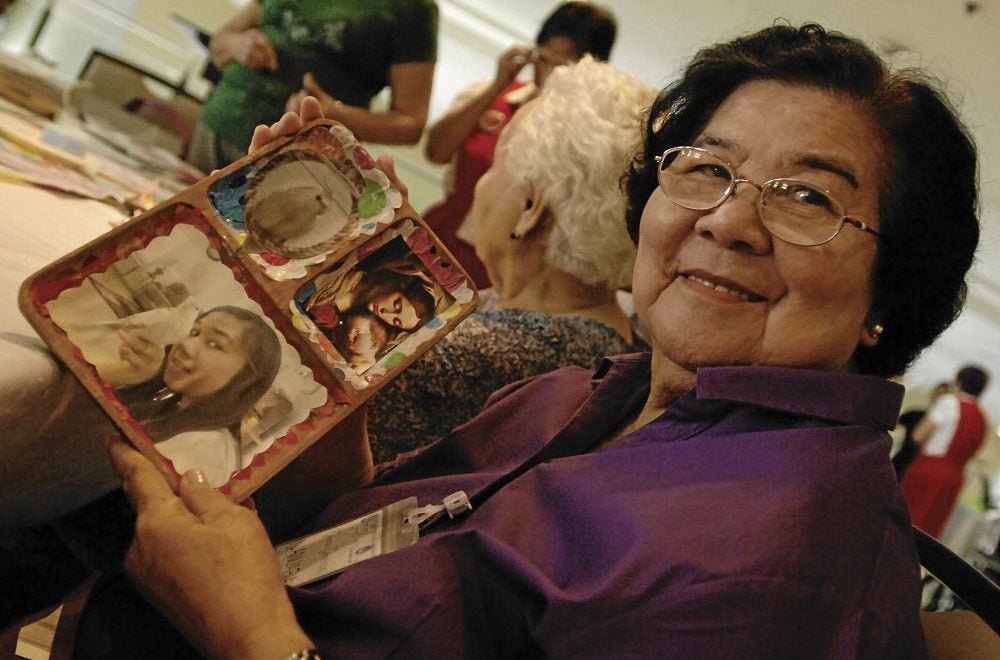 Theodore Stalder, 77, is a relatively healthy man. A voracious reader—his all-time favorite broadsheet is PDI, he said—the Swiss national is sharp and still does things on his own, when many people his age already need assistance.

Every Friday, Stalder joins the Grandma & Grandpa Club of St. Luke’s Medical Center (SLMC), Global City, with about 15 other elderly people. He’s not here for himself, he said, but for his wife, who is suffering from memory loss.

“We stimulate their minds and give them a sense of purpose, a social importance,” Cuanang said.

Stalder knows what Cuanang is talking about. When he first brought his wife of 47 years, Lina, 75, to the Grandma & Grandpa Club less than a year ago, she was unresponsive and unsociable. Today, even if she still drifts off during a conversation, Lina already responds politely when addressed.

It’s amazing what weekly origami, dancing, flower arrangement can do. It has been a slow but steady improvement for Lina, said Stalder.

For this Friday’s activity, a photo tray, he glued a big smiley face in the middle of the tray, with the image of a flower whose petals, all but one, have been plucked. On the left side he put the words: “Loves me or loves me not?”

“The last petal is ‘loves me.’ She loves me,” he said, laughing. “I promised my wife I’ll be here for her. So I’m here. I’ll be here even after she gets better,” he said, squeezing Lina’s hand. For a minute Lina’s eyes sparkled, and then they gazed blankly at him again.

Dr. Marian Suarez, director of SLMC Geriatric Center, said there are many geriatric syndromes addressed by the center, such as dementia, depression and urinary incontinence.

After a Comprehensive Geriatric Assessment—a diagnostic process that determines medical, functional and psychosocial problems and capabilities of the elderly—the team determines how to address the problems individually.

“We want them to have a better quality of life. They will be among people who have the same problems and issues, people they can relate to. They actually become happier and show less and less symptoms of pain,” said Suarez.

Although many members have personal nurses and caregivers, a group of volunteers called The Women’s Board is also around to help. They are the volunteers of SLMC who assist with just about everything the elderly might need, such as cutting out photos, getting them a glass of water or, in some cases, simply carrying on a conversation with them.

“It’s always very fulfilling to volunteer. You need a lot of patience and humility to do this job. But sometimes they enjoy your company so much they want to chat some more over a cup of coffee,” said May Benedicto, one of the volunteers on The Women’s Board.

Mary Sanico, 86, a former grade school teacher from Cebu City, used to play tennis at a time when it was unheard of for a woman to be sporty. She played tennis with boys, she said, because women players were so rare.

Today she watches tennis on TV and is a huge fan of Roger Federer. When asked if she goes out with other members of the club, the feisty Cebuana whispered, almost conspiratorially, “No! I don’t know these people. I only meet them here,” before letting out a hearty laugh.

Sanico loves coming to SLMC every Friday, and she wishes there were more sessions each week. Here she has a goal, whether it’s learning—or re-learning—to appreciate arts and music or making a balloon arrangement. Sanico is happy she joined the Grandma & Grandpa Club.

“I look forward to coming here. During ballroom dancing days I don’t get up to dance—I can’t do that anymore—but I sit on my chair and tap my feet. I watch other people dance. I don’t like to go home after. I feel useless there. There’s nothing to do,” Sanico said.

Stalder agrees: “There is never a dull moment here. My wife and I have never missed a session since Day One.”

Meantime, he is optimistic about the future. Lina is responding well; just last week he bought a Scrabble set so that he and his wife can play a stimulating mental game at home.

Session starts at 9:30 a.m. and ends at 11:30 a.m. or 12 noon every Friday. A lineup of activities has already been scheduled up to May, ranging from painting to lectures in nutrition. The package (P2,500 for four sessions, and P700 per session) includes materials for activities, and food and water.