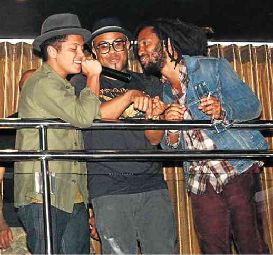 ALL THOSE fans who went bananas watching fantastic Grammy Award-inning singer/songwriter Bruno Mars had more surprises coming their way when tons of people on the partying fast lane dashed over to the trés exclusive after-bash at the Seventh HIGH Club at Bonifacio High Street. 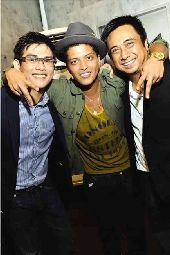 Straight from his Araneta soldout concert, Bruno arrived at the club around midnight with his band and entourage of pals. Overwhelmed by the energy of the party crowd, he made an appearance and took a microphone to serenade us a capella with his hit, “Nothing on You.”

People looked up at the Club Room balcony of Seventh High, taking photos and videos of this amazing moment, dahlings.

With him was his opening act, the handsome Michael Copon of “One Tree Hill” fame, who made all the girls swoon and applaud when he jumped onstage and started dancing with the crowd. 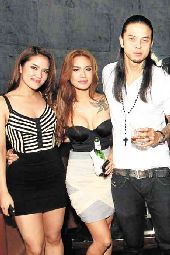 Many celebrities were spotted in the event, including Raymond and Richard Gutierrez; Bangs Garcia; so much fun Rufa Mae Quinto on a rare night out; “Pinoy Big Brother” Teens, Michelle Madrigal; Bianca King and Gwen Zamora; and top PR consultant adorable Carmina Sanchez Jacob, no less, just to name-drop a dash.

With their unique nightlife experience, Seventh High impressed both renowned foreign artists, palanggas. Mars and Copon both raved about “how fun the party was and we will definitely be coming back.” No wonder they actually left the building past 3 a.m. Hey, if that ain’t having a blast, what is, di bala?

A fun inauguration took place, dahlings, when a Citigold center at Citibank Savings Davao branch, was launch to strengthen presence in southern Philippines. 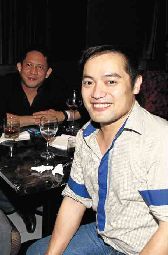 The opening of Citi’s management banking service here in Davao marks the celebration of its 109th year in the Philippines.
“We are committed to reaching out to more clients nationwide and with the opening of Citigold in Davao, we are delighted that our clients here can now experience our brand of wealth management,” concluded Citi’s mover and shaker Sanjiv.

“Citibank Savings is one of Citi’s biggest and most successful investments in the Philippines. By introducing Citigold to clients in Davao, we’re responding to the growing needs of our clients and reaching out to more customers across the country,” explained Tonet.

With Citibank Gold and Savings expanding around the Mindanao area, you can be sure customers can now enjoy premium product solutions, and best-in-class research and worldwide privileges, all in one bank. That’s the Citibank way, ’di bala, palanggas?

The saying goes that every generation searches for its heroes. Well, dahlings, we don’t have to look far, as this year, PLDT SME Nation unveiled 17 of the country’s awesome outstanding small and medium enterprise entrepreneur achievers, “Bossings,” chosen for their business success and contributions to the country’s economic growth and workforce, while promoting the use of information and communications technology on their way to success and profits, dahlings.

No one can forget that incredible CNN “Hero of the Year” Efren Peñaflorida Jr., natch, and brilliant business leader Joey Concepcion, among others like them, palanggas. 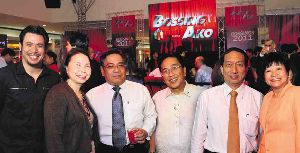 And faster than you could bat an eyelash, bossing Cecilio Pedro pledged a cool P1 million to the campaign, no less.

PLDT SVP and head of Customer Sales and Marketing Group Eric Alberto, in his super speech, said “PLDT recognizes that SMEs are the keystone pillars to our country’s achieving sustainable progress and prosperity. As the country’s leading telcon, PLDT fulfills a socio-economic mission to be that solid ally by the side of every Filipino SME.”

“The ‘Bossing Ako’ campaign demonstrates the benefits of technology specific for the vibrant SME sector. PLDT SME Nation enable SMEs toward even greater heights,” he concluded, to the wild applause of the audience, dahlings.

Bravo to all of you, our bossing heroes of today, for the inspiration you have given to tomorrow’s world-class leaders in the field of business, palanggas.

A country back from the brink

The awesome Discovery Channel commemorates the third anniversary of the Sichuan earthquake with a one-hour special. 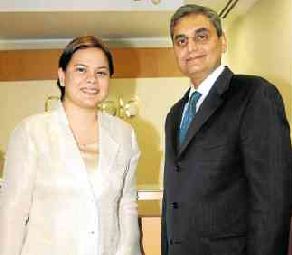 Think about it: From the impressive Bird’s Nest Olympic Stadium, to the massive Beijing Airport, and the wow! Shanghai World Expo, over the last decade, no other place on earth has attempted complex engineering on the scale that China has. Yes, Chinese engineers have totally bent the laws of physics and face-lifted modern China virtually overnight.

But even the most modern cities are not safe from the hand of Mother Nature, palanggas, and soon aprés the devastating earthquake in May 2008 hit Sichuan province in Southwest China, and the country had to rebuild entire cities from scratch.
Discovery Channel’s “Rebuilding Sichuan” will show us this unbelievable undertaking when it premieres tomorrow, May 12, 8 p.m., with encores on May 13 at 10 a.m. and May 15 at 12 p.m.

The Sichuan earthquake was the largest catastrophe in 30 years, and the 19th deadliest of all time.
In this must-see one-hour special, Discovery documents the re-emergence of Beichuan, the town hit hardest by the earthquake.

From the ruins of tragedy, palanggas, the “new” city brings with it new hope! Check it out.