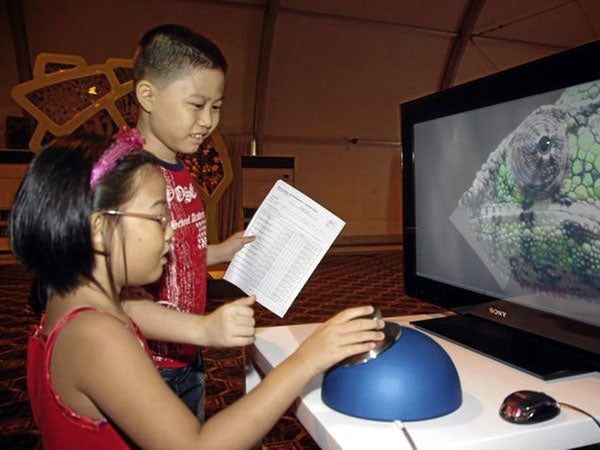 Canopy of Life: Marvel at nature’s wonder by watching plants grow or animals move in high speed or slow motion through the Spin Browser

At last, a museum that can rival the malls for sheer entertainment, variety and scope.

Set to open in December this year, the Mind Museum at the Bonifacio Global City in Taguig will have more than 250 interactive exhibits whose highlight is—surprise!—a permanent dinosaur exhibit. The Mind Museum’s resident Tyrannosaurus Rex is a 40-foot cast exhibit that answers to the name Stan.

The museum stands on a 12,000 sq.m lot and is made up of the museum building, science-in-the-park and a botanical garden. With a budget of P1 billion, the museum is billed as a world-class science museum that, it is hoped, will make science accessible to all while making it fun and engaging as well.

The Mind Museum will be divided into five main galleries and basically tell the story of the universe, atom, life, earth and technology. There will also be a Human Brain exhibit “where guests can walk through a giant human brain to understand how it works,” according to museum curator Maria Isabel Garcia.

Garcia adds that visitors from 6 to 96 can expect such novelties such as the “Air” exhibit that explains how tornadoes happen, some giant math puzzles, and “Lucy,” a scientifically accurate rendering of a 3.2 million-year-old human. There will also be a “Big Small Wonders” exhibit featuring a handheld microscope that projects images of microscopic things onto a big screen.

Fans of 3-D movies are also in for a treat. Says Garcia: “We have a 3-D animated film called ‘Birthplace,’ produced by an all-Filipino crew, that will compress 4.6 billion years of the planet’s natural history in 12 minutes.”

Such interactive exhibits build on the concept that museums are meant to educate and that sometimes, the best way to inform is to entertain. Kids, after all, want to experience what they are learning. Hence, the interactive character of most of the exhibits, says Garcia of the Bonifacio Art Foundation Inc. (BAFI)’s intent when it conceptualized The Mind Museum project in 2007.

“The BAFI Board wanted Bonifacio Global City to have the arts and the sciences make up the soul of BGC.”

Quoting New York Times science writer Natalie Angier, Garcia stresses that “Science literacy is the currency of this age and of that to come (‘The Canon’).”

“We would like to give the next generation of Filipinos this currency of mind,” she adds.

Garcia, however, clarifies that the museum does not intend to replace schools. “We would like to help breed scientific literacy that will help everyone, whether you are a housewife, businessman, laborer, student or clerk, to be inspired to understand nature. We would like to inspire an understanding of the world that the sciences are uniquely poised to give.”

Museum-goers had a preview of what the Mind Museum has to offer  during an exhibit testing dubbed “Minds-at-Work,” held last May at the NBC Tent at the BGC. Around 20 selected pieces were displayed and tested.

“The Mind Museum wanted to get the feedback of the public in terms of the exhibits’ interactivity, durability and aesthetics, which the museum will incorporate as it completes these pieces,” explains Garcia. There will be another exhibit testing in August.

The Mind Museum is also a showcase of Filipino ingenuity, creativity and science aptitude, as Filipino artists and scientists were commissioned “to show specific science principles.” Garcia reveals that 90 percent of the exhibits are being done by local fabricators, who also do work for science museums abroad.

Unlike other state-supported museums abroad, however, the Mind Museum is a completely private and non-profit initiative, says Garcia. “The Bonifacio Art Foundation is raising funds purely from private donations,” she adds.

The fund-raising project is called “Light a Star and Help Build Imaginative Minds.” The donor’s name will be “written in the stars” in the museum’s virtual night sky and in the marker in the museum’s Universe Gallery.

Photographs courtesy of The Mind Museum