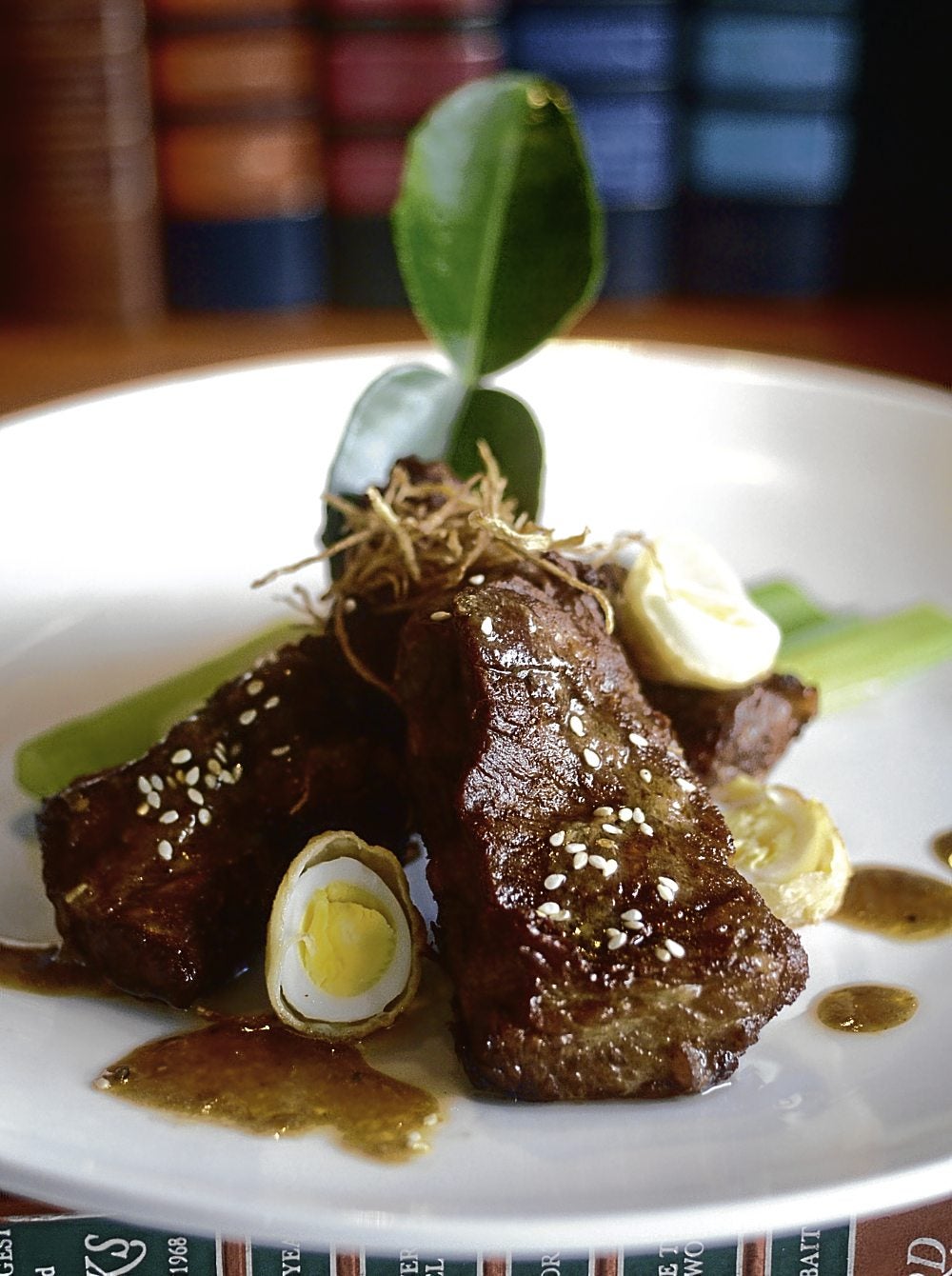 Tired and bored of the usual adobo, Hermogenes Perez Jr. tweaked the quintessential dish and created a more flavorful, tempting version that has instantly been a favorite of his family and friends for two years now.

Instead of using laurel leaf that adds aroma to the mixture, Perez flavors his adobo with kaffir lime. It gives a tangier, headier taste—a surprising modification for such savory dish.

Kaffir lime is often used in Thailand and Malaysian cooking. The glossy, dark green leaves have a unique double shape and look like two leaves joined end to end. When used in cooking, it offers an intense flora-citrus aroma.

“I began using kaffir lime when a staffer gave me a plant,” says Perez, the new executive chef of Traders Hotel Manila on Roxas Boulevard. “I then grew it in my backyard in Sta. Maria, Bulacan.

“Like lime or calamansi leaves, kaffir has thicker leaves, too. It’s quite a sensitive plant,” explains Perez, who’s also called Chef Batt by friends and family.

Perez uses kaffir lime in most of his creations, such as bagoong (shrimp paste); it helps eliminate the fishy smell. Since kaffir has medicinal properties, he also boils and drinks it like tea.

Apart from adding kaffir lime into the dish, what makes Perez’s adobo more special is that it’s served toasted and crispy. After cooking the pork adobo, he removes the meat from the sauce and deep-fries the meat.

“The meat is crispy on the outside and so soft on the inside,” says Perez.

Another exciting part of his adobo is the sauce—Perez thickens it with mashed potatoes.

“Instead of adding potato cubes in my adobo, I mash the potatoes and blend it in my sauce. It tastes even better,” he says.

To add garnish, he boils quail eggs, rolls them in flour and egg and deep-fries them. He uses chicken eggs, too. For the meat, he uses either pork ribs or pork butt. Chicken and beef will also do.

When plating the adobo, Perez serves the meat separately from the sauce, then adds the quail eggs on the meat. He drizzles sesame seeds on top and puts leeks on the side.

“It actually tastes like Thai but the presentation is Chinese,” says Perez.

Perez, 47, is a late-bloomer when it comes to cooking. He got interested in food when he landed a job as waiter in a hotel in Roxas Boulevard. He was 25.

After two years, his break came. The hotel needed a cook helper in the kitchen—to cut veggies, wash dishes, carry huge pots and pans. He applied and got the job.

Eventually with perseverance, dedication and interest in cooking, he was promoted to third, then second, and on to first cook. He later became chef de partie and sous chef.

At Edsa Shangri-La Manila, he was banquet sous chef for six years before he moved to Traders Hotel Manila as executive sous chef. He soon became executive chef.

“I believe there has to be passion and love in what you do to be where you want to be,” says Perez, who grew up in Masantol, Pampanga.

After work, Perez still gets to cook at home for the family dishes such as whole roast chicken stuffed with lemongrass, kare-kare, menudo, adobo, sinigang. His wife bakes bread for the family.

In a big sauce pan or wok, heat 2 tbsp of oil then sauté the chopped garlic and onions. Add the pork to the pan. Add 2 c of water, ¼ c of soy sauce, vinegar, pepper, paprika and the lime leaves. Bring to a boil.

Cover and simmer for 30 minutes or until meat is tender.

Thicken the sauce by adding mashed potato. Add salt and pepper, if desired. Bring to a boil then simmer for an additional 5 minutes. Remove the pork from the sauce pan.

On another pan, heat cooking oil and brown the pork and quail eggs for a few minutes. Arrange in the plate and serve hot with pickled vegetables and garlic rice.