A seat at the table | Inquirer Lifestyle ❮ ❯ 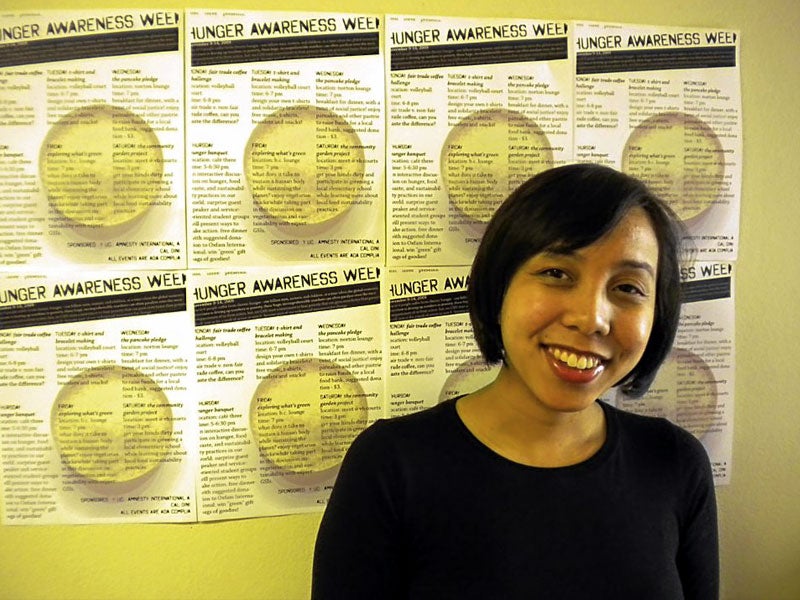 A seat at the table

How would you feel if you were invited to a party, and upon arriving, are asked to sit on the floor and share with other guests a meal of rice and water? Meanwhile, some of your friends are led to a fancy table where waiters bring them a full-course meal.  Another group of guests eat buffet-style, but they have no table and have to balance the food on their lap.

Would you stay?  If you were seated at the fancy table, would you share your food with your friends who are desultorily picking at their austere meal of rice and water?

Welcome to the Hunger Banquet, a simulation of how mealtimes go in the rest of the world – with the upper class living off the fat of the land and low-income groups making do with crumbs.

The project, originally conceived by Oxfam, was meant “to raise awareness on the reality of hunger and food insecurity,” says then Public Health major Bianca “Nikki” Nepales, who helped stage one inside the University of California Berkeley campus in November 2009.

“I liked how the hunger banquet would literally try to put you in the shoes of people around the world who are experiencing hunger, poverty, wealth, and power,” adds Nikki. “I hoped that through this interactive theater, we can become more empathetic to people in our community who lacked access to food and hold ourselves accountable enough to do something about the issue.”

Experience, she notes, is a great teacher. “Once you experience something, it stays with you the rest of your life. You cannot unlearn something. No one can take that away from you, but it’s up to you how you use that knowledge. I wanted people to experience, even for a moment, hunger and the unequal distribution of power, and then act on that knowledge and experience to transform the situation.”

Hunger may have been a stranger in the Nepales household, and food waste even more so, but Nikki lived in the residence hall and saw how much food students wasted in the dining hall.

Recalls this older of two daughters of Hollywood entertainment writers Ruben and Janet Nepales:  “The food on the plates would only be half eaten and the dishes barely tasted before they were tossed away. Although this food would be composted and returned to the earth, it frustrated me to see how people were not more conscious of how much food they were taking and what a privilege it was to toss it away. Right outside these dining halls, there was and still is a large population of people who go hungry.”

It was about that time that she began taking her minor on Global Poverty and Practice, says Nikki. “I was frustrated to learn that many of the world’s poor are poor because of decisions made by the western world. Clearly, we had enough food to feed every man, woman, and child. Yet power determined who got fed each night. ”

Nikki’s interactions with clients at a student-run health and social services organization further exposed her “to the tip of the (hunger) iceberg,” but it was enough for her to recognize that something is wrong.  Her parents’ regular interaction with Hollywood biggies firmed up her commitment as well.

“It used to frustrate me, the amount of attention and money that big celebrities receive just because they have good looks or can portray a character effectively,” she says. “It taught me that society doesn’t reflect very much on what we have and the inner beauty that we possess.  I think we turn to celebrities because they are perceived images of perfection and beauty that have been institutionalized into the system, and we have accepted this ideal of beauty and fame when it is anything but natural.

“But my parents don’t write about this type of beauty or celebrate this false notion of perfection,” she adds. “My parents write about the person; they bring out the truth in them, their weaknesses and their regrets. Their writing taught me to treat each person as a celebrity, as someone who is truly beautiful with a fascinating story to tell. ”

Her parents have apparently taught her well. When it came time for her internship, this honors graduate chose to work with the Philippine non-government organization Likhaan, which provides services on reproductive health to urban poor women. And it was here where she realized that the issue of hunger in the Philippines is closely tied to family size.

“I saw the connection to the lack of access to reproductive health methods and the lack of resources and options that families had to feed their children,” she says. “Many women knew that they could not afford another child, yet they lacked the reproductive health tools and methods to maintain their family size at a level that would ensure that each child would not go hungry, would have clothes to wear, or would have the opportunity to go to school.”

She adds: “I also didn’t expect to see the huge gap in income as large as I saw it play out in the Philippines. There were too many mansions with informal settlements built right against their walls. How did we contribute to this and how were our actions, or lack of them, prolonging this situation? It should not have to be this way, though many people told me that it would be this way always. Again, we have come to accept poverty as a natural idea, when it has been created by society and government.”

Despite the Filipinos’ infamous propensity for constant snacking, Nikki observes that “the Philippines is missing a main ingredient in its eating habits—birth control. If the Philippines wants to be serious about ending poverty and hunger, then it needs to respect the basic health rights of women and their families. The debate should not focus on the morals of birth control. That is why God gave us a free will – to use our freedom of conscience to make moral decisions in our lives. Yet we cannot have freedom of conscience without freedom of choice.”

While the Hunger Project has very strong parallels with the Philippine situation, it is also worlds apart from actual lives, says Nikki. She recalls: “I was surprised to see people get up and walk out when they learned that their meal would only be rice because they had been sorted into the low-income group. But in the Philippines, people cannot just walk away from their poverty. It is their reality.”

Despite the walkout by some students, she considers the project a success.  “About 50 people showed up and we were able to have thoughtful discussions in the end,” she says.  “Based on comments on the evaluation sheet, many of the students were surprised, frustrated but also transformed by the experience.  The high evaluation marks [showed] that we were able to raise awareness on the issue.”

But perhaps the best proof of success is the change in the students’ behavior when it comes to their eating habits.  Says Nikki: “I think my project was a small part in the movement to be more sustainable at Berkeley. We have eliminated almost all plastic trays so that students are not inclined to carry more food than they will actually eat. From this simple change in behavior, I’m sure future data will show that we have reduced our food consumption and waste. ”

She too has become more aware of her privileges and biases, she admits. “I pause and reflect more often on what I have, and centered my career on implementing strategies to prevent hunger and homelessness.”

How can ordinary folk help feed the multitude?  Nikki has a few suggestions:

Divide your wealth into three groups: spending, sharing and saving. Use your sharing money to improve the situation, be it hunger, child trafficking, or reproductive health, in ways that will sustain positive efforts and make transformational change

Ask who is being compensated for the food you eat

Write letters to your elected officials and voice your opinion

As for herself, Nikki, a corps member of Teach For America at the Loyola Marymount University where she is earning her MA in Education, will be teaching kindergarten through fifth grade special education. “I believe the education that I will provide my students will be one of the most direct ways to prevent hunger and homelessness,” she says.