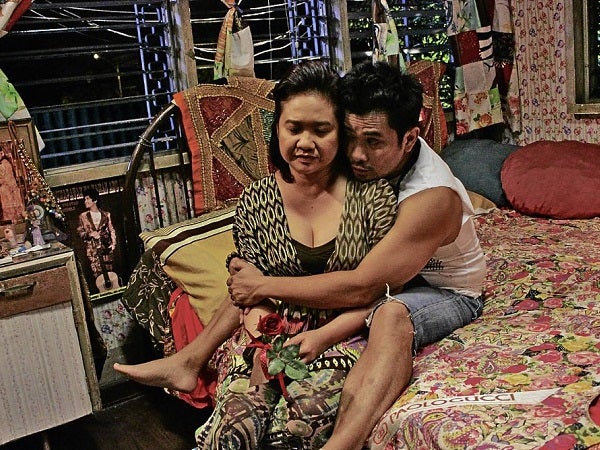 There’s something magical about the pen Chris Martinez wields. This screenwriter/director has managed to create some of the most memorable Filipino films in the past years, including “100,” “Kimmy Dora,” “Here Comes The Bride” and “Ang Babae Sa Septic Tank.”

In his most recent offering, “I Do Bidoo Bidoo,” which was produced by Unitel and Studio 5, Chris forays into the world of musicals and emerges triumphant.

The film, which centers on two very different families brought together by a young couple in love, brilliantly uses the beautiful songs of APO Hiking Society to tell its story.

At the premiere at SM Megamall last Tuesday, fans of the movie’s many stars came in full force. Teenage girls screamed for Sam Concepcion, placards were held high for Zsa Zsa Padilla, a lot of love was given to the rest of the cast and to APO. And they deserve it.

“I Do Bidoo Bidoo” will take you on a delightful musical ride, offering surprises along the way.

Wonderfully cast, skillfully edited and lovingly made, it’s a film that you would want to watch over and over again. It’s more than just a film, it’s a love letter—to Apo Hiking Society, to OPM, to Filipino artists and to music and movie fans.

And, like most love letters, it will leave a smile on your face.

The day after the premiere at SM Megamall, we sat down with Chris at a coffee shop to talk about the film, APO and that crazy Ogie Alcasid-Eugene Domingo love scene.

How did the idea for I Do Bidoo Bidoo start?

It was Unitel founder Mr. Tony Gloria who commissioned me to do it. It was his idea; it was his dream project. He saw Mamma Mia and he told me, gawa ka ng script using APO songs. Syempre excited ako. This was three or four years ago. I finished the final script two years ago. Medyo mahirap. It took another year for us to start the production.

How did you choose which songs to include in the film?

Pinakinggan ko lahat ng songs ng APO. I picked the most popular ones, kung ano yung pinaka-recognizable sa mga Pilipino. I picked 21 songs. Eventually I had to trim it down to 17 or 18.

How hard was it to trim it down?

Was your writing process different this time since you had to include songs?

Did you know who would play the characters when you were writing the script?

Ang sure na sure lang ako was Zsa Zsa.

Did you know from the start that you were going to direct it?

So how did that happen?

I think Mr. Gloria saw “Here Comes The Bride” and “Temptation Island” and he saw what I can do, he saw na kaya kong gumawa ng bigness. Ang tagal, ang tagal niyang dina-dangle-dangle sa akin yung project. Gusto ko talaga, syempre di ba! Tapos when he said na: “O, you’re going to do it na.” “Aba thank you naman.” Hindi lang naman ako yung director sa Pilipinas, marami naman siyang choices. I had to prove to him na I could do it.

Who decided on the casting?

Did you know Tippy Dos Santos before this?

Where did you discover Neil Coleta?

Let’s talk about that love scene.

Did they both say yes to that scene kaagad?

Where did you find that beautiful house?

What about the church?

Which are your favorite scenes?

When I direct, I try to separate it from being a writer. I attack the script as a director. Sometimes jino-joke ko sila, “Tawagin niyo nga yung writer! Sino ba sumulat nito? Ang hirap hirap!” Yun naman yung masaya when you’re the writer and director, you can adjust it on your own. When I write a script and I’m supposed to direct it also, nilalayo ko yung sarili ko as a writer. I’m crazy like that. Kasi di ako pwede magpatali kung ano yung sinulat ko lang, mali-limit ako eh.

How long did it take you to shoot the movie?

Who chose the choreographer?

Did you collaborate with her?

What was it like working with Vincent De Jesus, the musical director?

Why did you name the puppy Buboy?

Did he know you were going to do it? How did he react?

When was the first time APO watched the movie?

Has Zsa Zsa seen the film?

No. But when she comes back we’ll have a special screening for her.

Now that the movie’s open, how do you feel?

How has the feedback been so far?

Do you have other projects lined up?

I think I Do Bidoo will work as a stage production. Are there plans?

May plano. I think it’s part of the contract.

Will the soundtrack be released?

“I Do Bidoo Bidoo” is now showing at theaters nationwide.