To the victors—and the Filipinos—belong the Spo | Inquirer Lifestyle ❮ ❯ 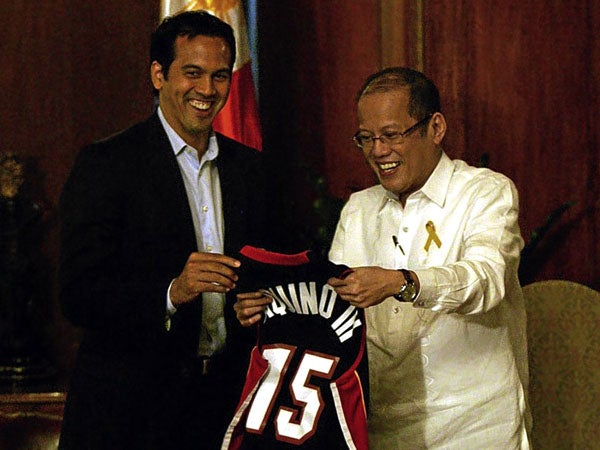 To get into the core of Erik Spoelstra’s being Filipino is to start right at the very beginning: There was this young kid with uncombed hair wearing a white cotton shirt and smiling into a camera. Beside him, the computer monitor was running a grainy video footage of a basketball game.

There’s no question as to what happened next after the photograph was snapped. Spoelstra, then 25, began his long solitary bout with the video editing software as he manipulated the controls, splicing the needed material and putting together another video analysis of the Miami Heat games or those of their next opponent.

This room is called The Dungeon, which sits in an unobtrusive corner of the old Miami arena. Almost everyone is unaware of its presence except for Spoelstra, who worked graveyard hours just to make sure that the Heat coaching staff, then led by Pat Riley, had whatever video material they need to work with.

Those were the days.

Nowadays, Spoelstra walks into a different kind of room, the well-lit ballroom that is the centerpiece of a hotel ground floor and the center of the sports writing universe for a day.

He had ditched the shirt in favor of a conventional three-piece (“I’m not as daring as Dwyane Wade when it comes to fashion,” he joked), and had his hair slicked in place almost in Riley-esque fashion.

This was the fourth time Spoelstra has visited Manila and there was a palpable change in him. He wasn’t as guarded as on his last visit, when organizers would warn media people scheduled for time-pressured one-on-ones to stay away from questions about the Heat’s Big Three.

He could now talk about them freely, joking about how they’d make the core of his own US Dream Team.

Spoelstra’s recent visit to Manila came with a milestone: The coach of the NBA champions arrived with the Larry O’Brien trophy, which was displayed before awestruck journalists during his first press conference in Manila since leading the Heat past the young Oklahoma City Thunder in the NBA Finals.

“I’ll never get tired of looking at that. That’s a beautiful thing to look at. And I’ll never lose the passion chasing that,” he told reporters.

You’d think that for a first-time champion coach of the world’s most polarizing basketball club, Spoelstra would have little time to squeeze a Manila visit into his schedule.

“I told my assistant to move some dates and push some appointments back to make time to visit Manila,” he said.

And it wasn’t just a token visit. He dropped by the Philippine Basketball Association and soaked in the atmosphere of a league he nearly became a part of. Former PBA analyst Jim Kelly had once tried to recruit the Portland-raised Spoelstra, who had stints in a Germany pro league, to play in the PBA.

“I know it’s not good to have regrets in life, but sometimes I do think about that chance I had to play in the PBA,” Spoelstra said.

Caught in the whirlwind of championship action in front of perhaps the most passionate crowd in the entire basketball universe, Spoelstra didn’t just re-live what-could-have-been. He felt the itch again.

“If I could, I would’ve taped up my ankles, put on some knee pads and jumped into that game. That looked like a lot of fun,” Spoelstra said of Game 6 of the PBA Finals between eventual champion Rain or Shine and B-Meg.

For one other basketball coach, that night was even more memorable.

“The best thing about winning [that game] was Coach Spo coming into our locker room,” said B-Meg coach Tim Cone.

“I knew him before he got LeBron James and Chris Bosh. And he hasn’t changed at all. Having those players and winning an NBA championship, it’s amazing how he has stayed pretty much the same guy,” Cone added.

Spo has had a positive impact in at least one player.

Asked which player in the championship series impressed him the most, he casually mentioned James Yap’s name. And for the Llamados superstar, that casual mention meant a lot.

“Imagine, a champion NBA coach who handles LeBron James, Dwyane Wade and Chris Bosh noticing me. It really is an inspiration,” Yap said in Filipino.

That’s the first thing very Filipino about Spoelstra. He never forgets his roots.

“I don’t want [the NBA championship] to change my lifestyle,” he said. “I get recognized more and I need to wear a baseball cap when I eat out in Miami. But it hasn’t reached a point where I wear a fake mustache or clown glasses.”

Like a true Filipino, he does not distinguish between ranks. He treats everybody the same way. In an interview with ESPN in 2011, an NBA scout spoke glowingly on that trait of Spoelstra: “All he does is work his balls off and treat everyone the way they should be treated. He treats the film kid the same way he treats Pat Riley. He knows the game as well as anyone. But the big thing is, he’s respectful of the opportunity he’s been given. He doesn’t have amnesia about where he came from.”

It’s not just the unnoticeable office deep in the pits of an old arena. It’s also his roots, his heritage.

Whether he’s coaching three of the biggest superstars in the world or the national women’s team of a country obsessed with hoops, or kids with short attention spans, you get the same Erik Spoelstra who paces up and down the sidelines of an NBA arena.

“He is very dedicated to giving back. Kids respond to him and he truly enjoys teaching them,” said a volunteer of the outreach program Spoelstra runs during his yearly visits to Manila. Most of this program is centered on teaching kids about basketball and discipline.

It is one of the things that make him feel very Filipino, said Spoelstra, whose mother is Filipino.

“I’ll always be proud of my heritage and I feel blessed that I get this opportunity to reach out and give back,” he said. “I think that urge to give back to my roots is something I got from my mother.”

That, and something else.

Start from the beginning-in the dungeon. If you knew little about manipulating video editing machines and software and still enthusiastically volunteer to be a video coordinator of a professional basketball squad for the sole reason of making sure that you could be “near basketball,” you’d most probably trace your roots to one particular basketball-crazy archipelago.  •