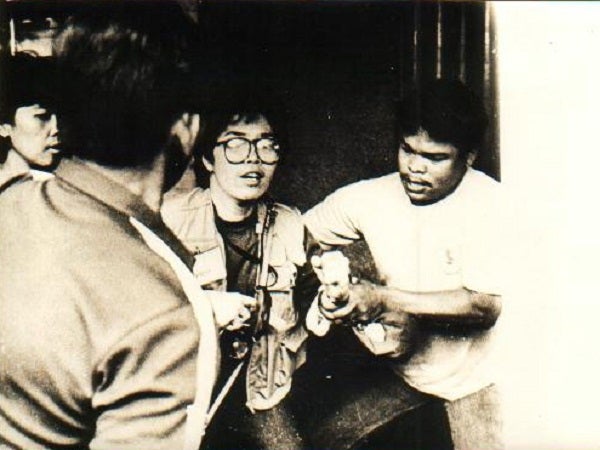 SUICIDE JOURNALISM: The author being arrested by the Metrocom during martial law. Photo by Erik de Castro

“Better dead than read”: The years of writing dangerously

I dig my files and clippings and I realize that this assignment is somewhat discomfiting. A flood of memories surges, tsunami-like. I feel the warmth of triumph and of freedom long-won, but also feel sadness over the loss of those I had met and known and written about.

It all began more than 30 years ago.

On July 10, 1980, my face was on the front page of Bulletin Today, the biggest newspaper at that time. The photo caption read: “Hearing: A magazine writer, Ma. Ceres Doyo, answers questions from Deputy Defense Minister Carmelo Barbero, chairman of the Armed Forces human rights committee, in connection with her article on the death of Bugnay chieftain Macli-ing. (Photo by) L. Perez.” 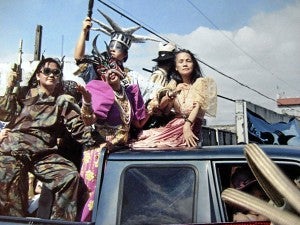 The caption was misleading.  It was not a “hearing”; it was a public interrogation. What “human rights committee”?

The article headline was simply, “MACLI-ING.” All caps. The blurb was also misleading: “Dismiss link between dam, tribesman slay.” The military was dismissing the link, not me. The byline on the news story? Ramon Tulfo.

Several national papers carried the story on my interrogation following my Macli-ing Dulag story that came out in the Panorama Magazine dated June 29, 1980. (With birthday girl Imelda Marcos on the cover.) The story about Macli-ing’s death and the subsequent investigations ran for days in the Marcos-controlled newspapers and in two foreign magazines.  Letters to the editor and to me poured in.

As a writer, that Camp Aguinaldo interrogation was my first high-profile brush with the military. A few years earlier, writer Chit Estella and I were seized by the Metrocom while we were transporting an anti-dictatorship publication, “Iron Hand, Velvet Glove,” for a church-based human rights group. It was night and I was driving a car full of “subversive” materials.  The armed men released us upon the intercession of Sr. Mary Christine Tan, RGS.

For the Macli-ing story, I received the summons dated July 5, 1980 through Panorama editor Letty J. Magsanoc (now Inquirer editor in chief). Without batting an eyelash, she had published my story about the killing of Macli-ing Dulag, chief of the Butbut tribe in Kalinga-Apayao. She sure gave it a provocative title: “Was Macli-ing killed because he damned the Chico Dam?” Macli-ing led his tribe in opposing the construction of the Chico River dam. One night, armed men barged into his mountain home and pumped bullets into him. 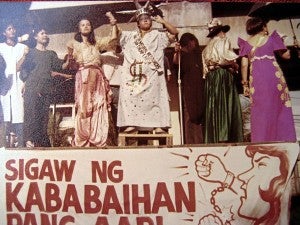 With a group of church and human rights workers I went to Kalinga on a fact-finding mission. To get to Bugnay village we scaled hills and crossed the raging Chico River with the help of Kalinga braves in G-strings. In the home of Macli-ing, I saw the blood on the wall and ran my fingers on it. I listened to the people’s stories and took photographs. After that I don’t know what possessed me but I just sat down and wrote. I sent the story and trembled. A dam inside me had burst.

That was my first major feature article and it got me and my editor in trouble.

Before going to the interrogation I went to Sen. Jovito Salonga, a former martial law detainee. His advice: “Go.” He said it like a blessing. A horde of nuns and a very concerned aunt of mine went with me. They took down notes-the questions, my answers. (I still have those notes.)

A few months later, in January 1981, Pope John Paul II came for a visit. What do you know, he handed me the Catholic Mass Media Awards trophy for that Macli-ing story. He held my head with both palms. It was never the same after that. The writing continued. Magsanoc would call it “suicide journalism.”

The second interrogation was in 1983. There was this series of summons for, and interrogations of, women writers that went on for days. This time, the individual interrogations were held inside closed doors and the interrogators were high-ranking military officials-a general and several colonels (one of them a woman). There was food galore-and wine, too-but how could one eat while being cracked?

I was the first to be summoned to Fort Bonifacio. Next were Domini Torrevillas, Sheila Coronel, Jo-Ann Maglipon, Lorna Kalaw-Tirol, Niñez Cacho-Olivares, Arlene Babst, Eugenia Apostol and Doris Nuyda.  Torrevillas, Coronel, Tirol and I (a freelancer) were writing for Panorama, the Sunday magazine of Bulletin Today. Olivares and Babst were Bulletin columnists. Apostol was the publisher, and Nuyda an editor, of Mr. & Ms. magazine. Obviously, the military and, it goes without saying, the Marcos dictatorship did not like what we were writing. (The Inquirer, began in December 1985, was not yet a gleam in Eggie Apostol’s eye.)

For several hours the military officers questioned me for my magazine stories on the military’s human rights abuses in Bataan and on rebel-priest Fr. Zacarias Agatep who was killed in an encounter with soldiers. The Macli-ing story was also brought up. I was giving the government a bad image, the interrogators said.  Before the interrogation began, I had asked loudly and defiantly, with pen and paper in hand: “Please give me your names.” And they did.

We all emerged uncracked. Ah, the stories we narrated to one another. What did we-the women writers-do next? Having gotten all the interrogators’ names, we plotted in the dead of night and built a case against them with the help of the Flag and Mabini lawyers. We strode into a jampacked Supreme Court to question the so-called National Intelligence Board, a creation of the Marcos military dictatorship to cow writers. We won. The respondents said they were done with it anyway. Duuuh…

We were front-page news. Not long after, Panorama editor Torrevillas and I were each slapped a P10-million libel suit for my story on military abuses in Bataan, courtesy of a military general who was not even in Bataan at that time, I was told.

My lawyers: Saklolo Leano (Siguion-Reyna Law Offices), Flag and Mabini lawyers Joker Arroyo, Rene Saguisag, Fulgencio Factoran, Jejomar Binay, Antonio Rosales, Augusto Sanchez, Lorenzo Tanada. The same ones who marched with us to the Supreme Court. At the preliminary investigation, Arroyo and Saguisag exchanged barbs with the fiscal nicknamed Joe Flame (Jose Flaminiano) who proceeded to file the case because he had to. (The case was dropped after the People Power uprising and Cory Aquino rose to the presidency.)

But there were other writers and stories similarly treated but which were not widely known and documented. So in 1984 and 1985, a group of us came up with two volumes-“The Philippine Press Under Siege,” volumes 1 and 2, that contained “dangerous writing,” stories that provoked the dictatorship-and their aftermath. It was published by the Committee to Protect Writers of the National Press Club under the bold leadership of the late Tony Nieva. Leonor Aureus-Briscoe edited Vol. 2. Transcripts of my two interrogations (from notes and memory) are in volume 2.

From the  editors’ note in volume 1: “Together, (these stories) show the kind of ’dangerous writing’ that has brought about the forced resignation, firing, blacklisting, arrest or detention of journalists, the padlocking or sequestering of a newspaper’s printing plant and equipment, and the filing of multi-million peso libel suits or subversive charges against writers, editors and publishers.

“What constitutes ’dangerous writing’ these days? Perhaps this volume can shed some light on this question. Two articles… deal with the President. Six reports are on the growing militarization in the countryside. Two are about election fraud and two on the aftermath of the Aquino assassination.”

Of volume 2, Nieva wrote: “Better dead than read” may well have been the title of this book for its graphic documentation of the blood-and-sand state of a profession under siege, underlying the personal struggles and heartbreaks of the men and women of the Philippine press who now work under the shadow of death itself.”

(I am trying to get a publisher for the 2012 second edition—two books in one.)

Having been harassed for my writings, I joined the almost 10,000 individuals who filed a class suit against Ferdinand Marcos and his estate. In 2010, almost 25 years after the dictator’s downfall, the victims and survivors of martial law excesses finally got a trickle in the amount of $1,000 each from a newly discovered hidden/ill-gotten stash.  We know there’s more where this came from. One thousand dollars—a measly sum for all the blood—and ink, in our case—that was poured, until and unless the other claimant, our democratic government, looks the other way.

Still and all, I say, what a great and sobering adventure it has been.  Doing the stories gave me great times—of terror and joy and sadness and fun. As I always say, nobody told me it would be like this. •