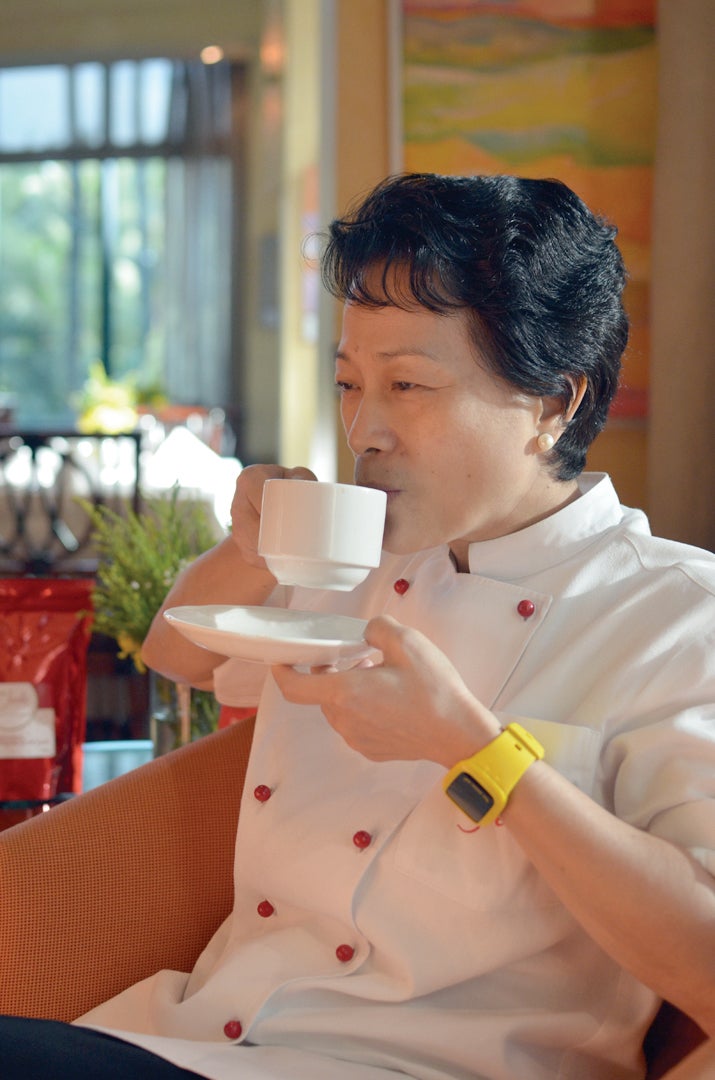 Chef Jessie whips up her own coffee blend

Breakfast was prolonged on the day I had to judge coffee concoctions. And while I was tasked to taste about 20 cups, the sum of a teaspoon each must have just been half a regular cup.

At the recent National Food Showdown, a culinary competition of students and professionals, the contest involving coffee required contestants to brew a classic cup, then their own fancy coffee drink. While most of us graded the taste and presentation, we left the technical stuff like correct preparation to experts who roast and sell their own coffee and train baristas, or those who make coffee according to a customer’s order.

Just like the little sips of coffee, the technical information came in bits. Where does the bitter taste come from? From over-roasting of the beans and taking too long to brew. The cappuccino has to have a dome of cream. The color of a good brew is beige, not off-white or brown.

It must be my tasting coffee season, because a week after, chef Jessie Sincioco invited me to sample her personal blend. She welcomed a long table of tasters, with stress on her advocacy of serving local ingredients, including the coffee beans that were brewing that day.

Good coffee being brewed is aromatically seductive. Somehow you close your eyes when you inhale. That’s what greeted us upon entering chef Jessie at Rockwell. Instinctively, you knew you came to the right place, and a cup of coffee is just what you needed.

But we were going to be educated that day by her personal coffee roaster, Lorenzo and Terry Reyes, who run Roaster Juan. A friend said the same wonderful aroma is emitted wherever the couple roasted, but Lorenzo said the art really starts with the beans—where they grow and how they are picked.

The ideal Coffee Belt is a few degrees up and down the earth’s equator, and the Philippines is within that area. But the choice places for chef Jessie’s blend are the Cordilleras for the Arabica variety, and Mt. Halcon in Mindoro for the Liberica.

Picking not only means getting only the ripe red coffee berries by hand, but also making sure the beans are still whole.

A sampling of the different coffee varieties was laid before us—Robusta, Excelsa, Liberica, Arabica. We smelled and tasted them to know the quality of each. The most favored and expensive Arabica smelled of tobacco and had a strong flavor. I liked the milder Robusta, which indicates my years of drinking instant coffee.

Excelsa was too watery, while Liberica reminded me of the Batangas barako, the coffee taste oftentimes masked by too much sugar put into the preferred local brew.

Chef Jessie took some time to get the right percentage of Arabica and Liberica for her own blend. And so, that day, we were to taste it in different forms—Americano, cappuccino and espresso. All excellently done, by the way. But to make everything perfect, Jessie also had food to go with the beverage—tiny otap and chocolate mousse, which are perfect with your cuppa.

Chef Jessie’s blend comes in a vacuum pack with a valve at the back. The valve enables the carbon dioxide to escape, which builds up after roasting. The valve also prevents oxygen from getting in to ruin the beans. It’s better to buy from someone who keeps these things in mind.

During the tasting, several coffee references came to mind. One of them was “Ordering Coffee Irregular” by Alan Cowell, a book that enumerates the way to order coffee in Italy, with an amazing maze of names that measures the amount of water in each cup. Cowell says Italians don’t call their basic coffee espresso but un caffè.

“The Bucket List” is another one—a movie that features two men with a list of things to do before they die. The movie ends with two coffee stories. The first one was when the two characters accomplished one item on the list—“laugh till I cry”—with the story of how the most expensive coffee beans are eaten by wild jungle cats in Sumatra, Indonesia, and then defecated whole. The beans are then cleaned and roasted to become Kopi Luwak. (In the Philippines, it’s the Alamid coffee beans eaten by the musang.)

At the end of the movie, another kind of coffee was featured—Chock full o’ Nuts, a New York coffee shop that began as a cheap place to get coffee and sandwiches from, and is now part of a huge beverage company. A coffee can and another can containing the ashes of both characters would be buried side by side in the Himalayas, the last item crossed out from their bucket list.