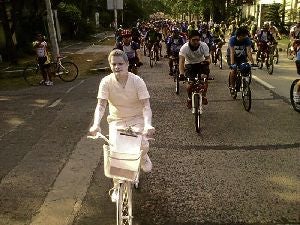 ARTIST, ESSAYIST and avid cyclist Rock Drilon doesn’t blow through a town by pedaling at 120 km per hour.

He’d rather melt into the scenery and savor the primeval experience—the air in his face, the sound of the tires riding over twigs, and the silence interrupted only by the changing of gears. When he’s cycling in the city, it’s an advocacy for a sustainable and liveable society.

“I’m not for racing,” he declares. “I want to connect biking to something like performance art and travel, like the Bisikleta Iglesia.”

Drilon caused a stir when he appeared as a ghost in last month’s 13th Tour of the Fireflies, a parade of bikers leisurely pedaling at 10 km in Metro Manila for half a day, encouraging cleaner air and saving the city’s thoroughfares.

Under his nom de plume and alter ego Pedro Dumancas, he appeared as a ghost biker. His ride, a piece of performance art, was titled “Giving Chabet a Ride.” It was a tribute to all the fallen bikers and an homage to Roberto Chabet. Washed in automotive paint, the bike carried Chabet’s work, canvas on a clipboard Chabet. 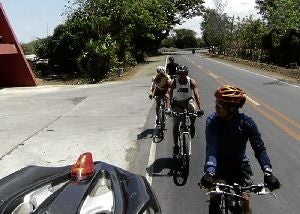 Drilon was inspired by a Facebook entry on little memorials in New York for bikers who were swiped in the streets. The accident sites became temporary sacred spaces, as flowers were strewn on them, reminders that the city needed more bike lanes. New York has added 250 miles of bike lanes. He says if it could be done in a densely populated city like the Big Apple, it could be done here.

“A bike on the street means one less car,” he maintains. It’s an alternative to reduce congestion and get people out of their cars, and a solution to the spiraling oil prices. Drilon cites Iris Murdoch, who described the bicycle as “the most civilized conveyance known to man.”

He points out how bike sales have skyrocketed in Japan in the aftermath of the March earthquake. The disaster had converted legions of Japanese to biking, after realizing that it was the best means of transport when the train system was paralyzed and when villages were inundated after the tsunami.

In Manila, Drilon pointed out the hordes of construction workers biking home as an alternative to the crowded buses and railway transit. He even went to a Chinese restaurant in Binondo, where some 50 riders folded their bikes and brought these indoor. 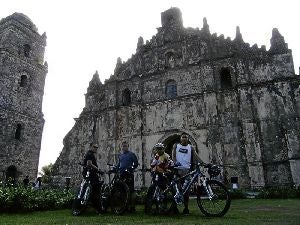 Growing up in Dumangas, Iloilo, Drilon would take a 1.5 km walk to school every day, which became very taxing. Since his mother, a widow, couldn’t afford to buy him a bicycle, she urged him to write to his brother in Manila. He made a comic strip about the travails of going to school without any mode of transportation. Her suitor was so touched by the artwork that he bought him a bicycle.

Learning to balance on the bike was tough. Later in life, Drilon taught his four sons—Ory Viktorio, Mikhail Pietro, Gian Thomas, and Andre Luis—to bike properly. He would wrap a towel around their chests to keep them propped up on their seats. His sons pedaled with him from Bontoc to Sagada and joined the Tour of the Fireflies.

Seven years ago, he became more enthusiastic about the sport. “It helped me psychologically. If something is gone, you take up something to keep you busy.” 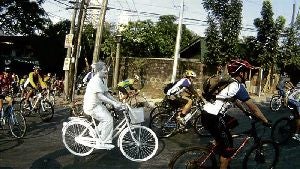 Drilon bikes 10 to 15 km thrice a week in the Marikina Riverbanks and the University of the Philippines, discovering new routes. On weekends, he’d bike with his buddies for 60 km, feeling closer to nature by biking uphill and downhill on the slopes of Rizal or rolling out under the sun in Quezon.

His most memorable tour was in Sagada. “I thought we came upon a forest, but every hilltop had a clearing,” he says. The bikers followed the trails made by the cows that went to every mount that had greener grass. He quotes Ernest Hemingway: “It is by riding a bicycle that you learn the contours of a country best, since you have to sweat it up the hills and coast them down…while in a motor car only a high hill impresses you.”

In the past two years, Drilon and his friends have been organizing the Bisikleta Iglesia tour to 13 churches every Maundy Thursday. Last year, his friends pedaled and prayed in Laguna. This year, the trip took them from Laoag to Vigan. They left after midnight by car from Katipunan Road, Quezon City on Wednesday, and were in Laoag to get a jump on the city’s landmarks.

They rolled out in the summer heat from the St. William Cathedral to Simbahan Bassist in Vigan. The Bisikleta Iglesia, aside from being a religious experience, has to be a visceral experience that encompasses the culture and regional food.

Drilon says biking has kept him fit at 54. It keeps his immune system healthy and has enabled him to recover quickly from ailments. It cured his asthma and kept his gout in control. “When I bike and sweat, the swelling subsides,” he says.

It’s the psychic benefits that outweigh the physical, however. To Drilon, it’s an allusion to living. As Einstein once said, “Life is like riding a bicylce—in order to keep your balance, you must keep moving.”