Why running is an adventure | Inquirer Lifestyle ❮ ❯ Why running is an adventure 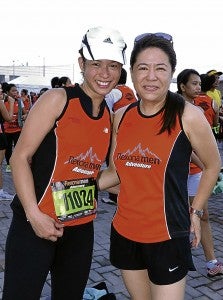 More than 9,700 runners raced on the streets of SM-Mall of Asia and Pasay to participate in Unilever’s second half-marathon event called “Rexona Adventure 2011” last week.

The fourth leg in the Run Rio Series, and Unilever’s biggest adventure production so far, it deployed 20 ambulances, doubled the guards patrolling the area, and had two fire trucks spraying cool water on the runners.

“Unilever has always been very strict with security. It is, in fact, our top priority. We want everyone to know we are prepared to handle a huge crowd,” said Anne Remulla, brand manager of Unilever Phils.

Cash prizes and medals were given to the top finishers of the 3k, 5k, 10k and 21k categories. All runners were automatically qualified to win in the raffle draw, which gave away adventure trips for two to the Great Wall of China.

Seen in the 21k was Christine Jacob, who finished her first full marathon last March, and Sea Princess and seasoned marathoner Tessa Prieto-Valdes. Beauty titlist Venus Raj joined the 3k category, along with Rich Herrera, Diane Necio and Chinggay Andrada. Slick Rick and Sam YG ran the 5k leg. As expected, the biggest turnout of runners was in the 5k category, followed by 10k, 21k, and 3k. 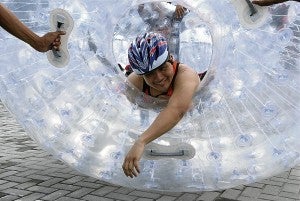 Medals and prizes were also awarded in the 10k, 5k and 3k legs.

The “Rexona Adventure 2011” also constructed the Rexona Adventure Hub at the SM MOA grounds, a playground for the bold and daring featuring a zipline, reverse bungee, zorb maze, wall climbing and free fall.

Opening the day before race day, the Adventure Hub lured the runners and their families and friends. The Adventure Hub also raffled off adventure trip packages for four to either Mountain Province, Bohol or Cagayan de Oro.

“We want to bring them adventure. We want them to know that participating in sports and having an active lifestyle is a lot of fun, too,” Remulla said.

Remulla added that this year, Rexona reinforced its advocacy in promoting sports development in the youth by donating proceeds of the Rexona Advenure 2011 to the Field of Dreams in Smokey Mountain.

A project of Junior Chamber International and Gawad Kalinga, Field of Dreams gives opportunities to schoolchildren to learn basketball, football, softball and ultimate frisbee. Eight schools and more than 5,000 families in the Smokey Mountain community will benefit from the Rexona Adventure 2011.

“We even had children from the Smokey Mountain community who participated in the 3k run. They were not required to join, but they wanted us to know how much our help has been appreciated. We believe sports is for everyone,” Remulla said.

Next year will be a bigger race, and with that an even bigger part of the youth’s dreams will be fulfilled.

“There’s so much to be gleaned from sports. You learn teamwork and camaraderie as you work on your strength and endurance. On top of that, you grow stronger emotionally and mentally, and live a healthy lifestyle,” Remulla said.