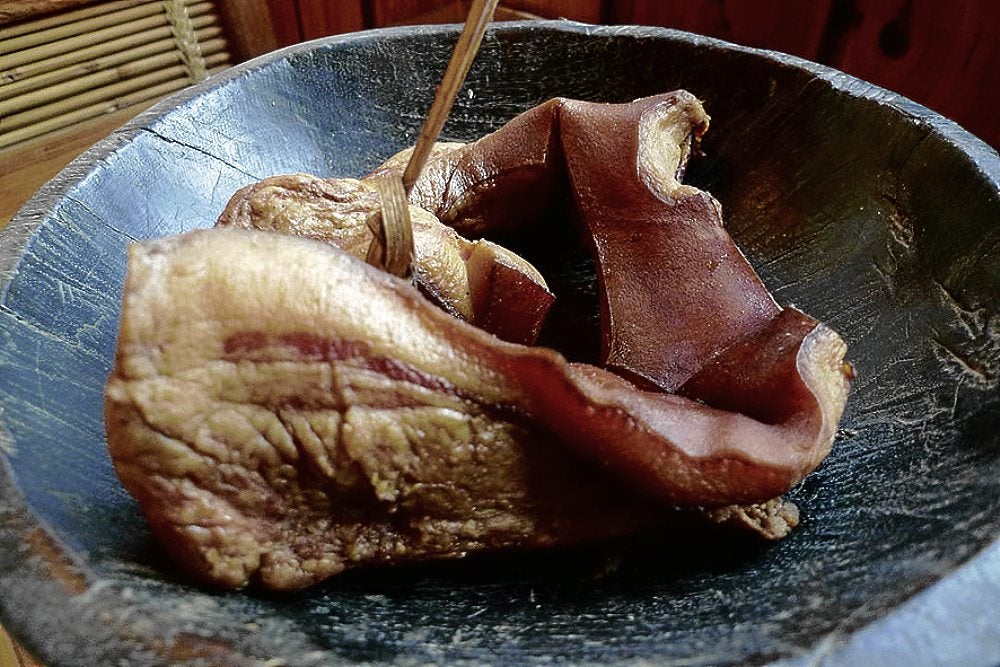 I had promised myself that I should see the Banaue Rice Terraces, and soon. My nationalistic conscience bothered me when friends from foreign lands would ask me if I had been to this wonder of the world. When that happens, I change the subject matter to other places like Batanes and Tawi-Tawi, faraway places I had been to, which, at the time, almost no one had visited yet.

And so when the offer to go to Sagada was made, I grabbed the opportunity.

My lack of geographical knowledge was evident; I didn’t even know that the Halsema Highway from Baguio didn’t pass through Banaue, and so every terrace look-alike seemed a possibility, even if what were grown there were vegetables. And the long, six-hour trip made me regress to my five-year-old self, bothering my companions with the question every hour: “Are we there yet?”

The adventure part certainly was eternally present as we seemed to zigzag through the top of mountains forever. The dizzying height made one companion comment that, if we ever fell into the ravine, we still had time to call our loved ones.

We arrived finally at 9 p.m. in a darkened Sagada; our lodging, Rock Inn, was a few minutes outside the center of town. It was only in the morning when we connected the name with the limestone formation at the road entrance—limestone natural sculptures being an attraction in other places in Sagada.

The chilly weather required hot soup, and how great that there was sinigang na baboy to warm our stomachs. I don’t think chicken noodle soup would have done the trick. Nothing like sour soup to alleviate hunger while at the same time readying us for more food, because we were hungry from that long trip.

Still, another chicken soup should have sufficed for me, the pinikpikan which Rock Inn had in the menu. But I would have been the only one from the group, since the rest were wary about this Cordillera soup that had a reputation based on the title of the song “Killing Me Softly”: The chicken is tapped with a flat stick until unconscious and then finally killed, the tapping also producing blood clots that add flavor and texture.

And so I had to wait till the next day to show them how good this soup was, and that the flavor came from etag, the salt pork usually smoked and dried out in the cool Sagada air. It is used sparingly because protein is hard to come by in the mountains.

How disappointing to hear that during our visit, the Sagada orange season was over, according to Fely Capuyan Omengan, owner of Rock Inn. But there were still some on branches in the grove, which grows about 2,000 trees. It was only in recent years that Baguio has begun selling Sagada oranges. Every time I was offered one, I thought the vendors were just taking advantage of the Sagada tourism fever.

How unfortunate to know, when we were about to leave, that the Masferre farm still had some oranges. Eduardo Masferre’s daughter-in-law, Monette, brought out several pieces for us to take home from the family farm, smaller than what the Baguio vendors claim is Sagada orange—really sweet, thin-skinned, not too many seeds.

The trees aren’t that big, she said, and always heavy with fruit, so that they have to prop up the branches to prevent them from breaking.

Eduardo Masferre is a revered figure in the Cordilleras. He documented in striking photographs the people there—his people, actually, because his Spanish father, a Catalan soldier turned farmer and Episcopalian pastor, married a Kankanaey, one of the Igorot tribes of the Cordillera, found mainly in Sagada and in Basaey.

Masferre’s legacy not only includes the striking photographs and the oranges, but also the Arabica coffee planted in the sloping highlands of Sagada. We visited one of the coffee houses, Bana’s, where the Sibayan couple roast the beans onsite but out of sight of visitors like us. They also brew the coffee, and the aroma is so enticing that the simple bread they offer there becomes also a must to partake of.

Because Sagada is such a small town, you bump into tourists, both domestic and foreign, everywhere. There are a big number of women among them, which probably means they find the place safe.

Yet while Sagada is beautiful and reminded me of long-ago Baguio with its healthy pine trees and quiet, sleepy atmosphere, the food is geared to foreigners, with sandwiches proudly offered, many places serving battered pork and chicken with lots of gravy, and yogurt, which has become a specialty even if fresh milk can’t be easily had in these mountains.

We wondered why fresh fruits grown in the place aren’t always served, like the blueberry that grows wild. But we were glad the Lemon Pie House uses Sagada lemons. We wondered why the celebrated chef is French. And the day we left, dinner at Masferre Inn, where we also stayed, was going to have another foreign chef cooking for the mostly Greek and Israeli tourists he was accompanying.

If there is one place one should visit, it is Sagada Museum where owner Christina Aben gives an enlightened introduction to her Igorot culture through her collection of kitchen utensils, woven blankets and clothes, hats and bags and pipes, and stories about why women then wore tattoos.

She told me that a demonstration and tasting of the pinikpikan is now part of most tours. I am glad for that, but I hope it’s not the “killing me softly” process that is emphasized, but how this dish is part of Igorot culture—that it is this ritual food that keeps them in touch with their ancestors.