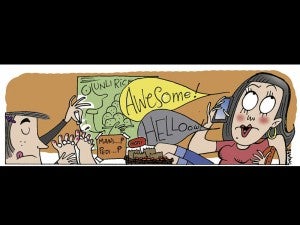 Unli call and text first came out in those large cell-phone company ads promoting an unlimited number of calls and texting. Soon the turo-turo  also began to offer “unli rice.”

The truncated word takes its place as one of  those so endearing to the Pinoy heart, such as mani-pedi (manicure-pedicure), Divi (Divisoria), Mega (Megamall), San Lo (San Lorenzo), K (ok), gg (galunggong), tapsilog (tapa, sinangag, itlog), and all the other logs.

HA HA HA or HE HE  HE  or HEH HEH!  dislodged the antiquated HAR HAR of older texters, which was derived from the comics.

“AWESOME!” and “CURRENT SQUEEZE”: We have adopted these all-American expressions in the writing of our newspaper and magazine lifestyle pages. Ex 1: “He’s awesome!” Or as in an invitation received: “It would be awesome if you could come!” Ex 2: “Who’s P-Noy’s current squeeze?”

“HELLO?!” Since Hello, Garci! but not because of, “HELLO?!” has claimed a niche in the new lively verbal exchange. And it now means more than just “How are you.” It is now a reprimand, a contrary opinion. Ex: “I couldn’t come yesterday because I was sick.”  “Hello!? We saw you at the mall yesterday.”

Ex: A student is buying a CD and frantically calling the salesgirl for assistance when friend nudges him and says, “Hello?! Nandiyan sa price tag!” (Tanga ka ba?)

“KAYÂ” (maragsâ accent on the last letter) replaces the old yata, but is now more definitive and ubiquitous. It performs the same function as “Hello?!” of registering a contrary opinion.

“HEY!” is now just an ordinary word, an informal “Hello,” or “How are you?” It is no longer the offensive slang term our teachers warned us not to use. I open my cell phone and find, “Hey, you! How you doin’?” from sculptor Rocky, one of my many young friends, and I am absolutely elated.

“CAREER,” “KINAREER” means it took a long time or much effort to accomplish. Ex: girl has gone to the Ladies’ Room of the resto and everybody on the table is waiting for her. Comment: “Kinareer na  yata ni Betsy.” Or a classmate looking at another’s well-made drawing assignment. “Ang ganda ng drawing mo! Kinareer mo yata!”

“HEAVY, PARE!”  Refers to some profound or scholarly statement someone has just let loose. Meant sarcastically. Or to make light of.

“GIMIK.” The outing of a barkada, like bar-hopping, malling, etc. Sometimes, “Gigimik muna ako” means “I’m going to attend to a sideline.”

“GIG.” A musical performance, usually underground, not commercial, of a singer(s) or band. As in: “May gig sa Eastwood sina Robert mamayang 10 p.m.”

“COOL.” Term of admiration for something sikat or astig. “Cool” is something that’s “hot” or popular, “in,” or talked about.

“PAPA” is not a parent but a benefactor, also vulgarly referred to as sugar daddy.

“L.Q.” Lovers’ Quarrel. Aside from its straight meaning, refers jokingly to any dispute between friends. As in, two classmates arguing heatedly over the ownership of a pencil are “having an L.Q.”

“M.U.” Kids make this fine distinction: “Mutual Understanding” means boy and girl know that they have a crush on each other. But they are not boyfriend-girlfriend (yet).

NOTA BENE. Many thanks for contributions to this section to grandsons Franco Regalado and Miguel Fernando.

Some words I have never found out the meaning of, such as the Visayan “ismagol” to mean rubber slippers (flip-flops to fashionistas). Were they ever smuggled? What for, since they’re so cheap! They weren’t “blue seal,” which is the old-time term for smuggled US cigarettes.

I don’t know how (Robinson’s) Galleria came about, either. Correct me if I’m wrong. “Gallery,” which it appears to mean, is “galeria”; “Galleria” (double l) comes from the root word “gallo” or rooster, therefore cockpit.

The seemingly harmless and happy “Maglamierda tayo” (Let’s go have a good time) is shocking to old people who say the Spanish word “mierda” as well as the French “merde,” which means “excrement.” 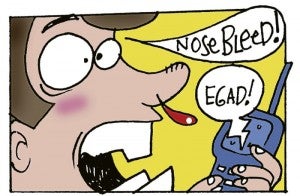 Madugo for “difficult” is good usage, as is malutong, not for chicharon, but to mean “sharp,” as in “Malutong na ang asaran nila, malapit ng magkapikunan,” or “Their teasing is getting overboard, they’ll soon be losing their tempers.”

“SWAK” is exactly what it is, a good fit. “Matronic” to describe a matronly look, including a stiff hairdo and a conservative dress, is also swak.

Those newly minted phrases reminded me of the forgotten Tagalog words I used to hear from my Batangueña mother in the ’30s. They were either pure colloquialisms or archaic phrases common to all Tagalog provinces at the time. But they now sound so bucolic and strange, they might as well be a foreign language.

“MAG-ASAWANG GUTOM.” Very, very hungry. I love this picturesque metaphor. This is what mammy used to say when she saw me or someone ravenously consuming a plate of rice and viands. It is very different from patay-gutom, which refers to someone who has nothing to eat wolfing down a meal.

“TAMPALASAN.” Wasteful; uncaring. I used to hear this when someone wasted food, like throwing clean cooked rice into the garbage can. “Huwag kang tampalasan, baka ka mabusong.” (Busong is karma or punishment.)

“DUMADAGONGDONG.” How my mama described me clattering noisily down the corridor (or could this be an invented word?).

“DINADALAHIK.” Coughing fit when one has a severe cold.

“MAGLANDI.” To play with (nothing to do with sex act). As in, “Mga ining! Tama na yang paglalandi sa putik!”

PININDOT. Small balls of sticky rice that go with ginataan, known in other areas as bilo-bilo.

PINAIS NA TULINGAN,  favorite ulam of Batangueños. Paired with tsokolate eh. P.S. Batangueños pour coffee, not chocolate, on rice or on tutong (the crust scraped from the bottom of the pot.)

MAGPUTAT. To eat fruits like banana or mangoes or sweets like panocha with (not after) the meal

MAGARA.  Elegant; nice. “Ang gara mo naman!” I would hear the Batangas folk say when they like what I’m wearing.

MAPANGLAW. Sad or dreary (can refer to the weather)

ILILIPAD KA NA SA BUNDOK NG MAKULOT. Often told to maids with so much lice that the kuto could fly her to Makulot Mountain in Cuenca, Batangas.

BATANGAN. How some residents referred to their province. As in, “Taga Batangan ka ga?” (“ga” is “din.”)