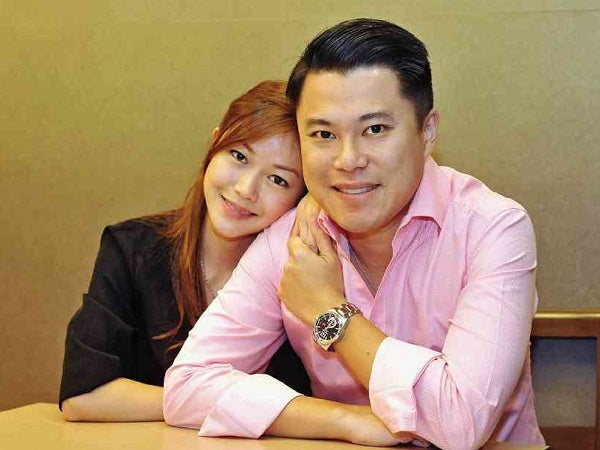 For Kevin Tan, one of the Philippines’ most eligible bachelors and eldest son of self-made billionaire Andrew Tan, to pop the big question, she must be quite a catch.

And she is. Tan, 33, is marrying her twice—in a civil ceremony here and in a church ceremony in Singapore in July.

Tan, first vice president and division head of Megaworld commercial division, has been photographed with and linked to many glamorous and eligible young women, so that media has lost track of their names. But, it’s obvious, he’s been won over this time. And as the movie goes, this is love, actually.

Theirs was no blind date. Their meeting wasn’t set up. It must have been one of the interesting coincidences in the metro’s night life.

Tan met the petite Michelle See two years ago. He was attending a friend’s birthday party at Opus Restaurant and Lounge at Resorts World. He had just gotten out of a relationship, and wasn’t really eager to jump into yet another, when a common friend introduced them.

See, 30, had also just gotten out of a relationship. She was in the lounge, arriving a little too early, so she was waiting for her friends when she was invited to join Tan’s group.

“He was really nice. He didn’t have any pogi lines. He wasn’t flirting or anything. If you’re in a place like that and guys flirt with you, your instincts will tell you to be on your guard right away. But he was different,” See said.

How to not get drunk

How different? Tan advised See how a young woman like her could hold her alcohol and not get drunk. (“Drink water in between sips of alcohol.”) This move earned him her trust so that, as the night went on, they exchanged PINs (they were both using BlackBerry back then).

Everything was going well until Tan left the table to go to the restroom. When he returned, See was nowhere in sight.

“That was weird. I thought she wasn’t interested until I got a text from her a few hours later: ‘Thanks for keeping me company. It was nice of you,’” Tan said.

Two days later, he asked her out to lunch. Since See worked in Makati at the time, Tan claimed he had a meeting in Makati just to be able to meet up with her. He was even more impressed at their lunch date when See poured tea for him. It reminded him of how his mother, Katherine, serves his dad and his siblings at mealtimes.

Not that See was trying to impress the son of a tycoon. She didn’t even know he was the Kevin Tan.

“I found it so easy to talk to him. I was so comfortable I didn’t notice I was pouring him tea. I don’t do that for everyone,” she said, laughing at the memory. See is the eldest daughter of businessman Wilson and Catherine See.

They have been inseparable since that lunch date, exchanging text messages every day. A year later, they got engaged—in New York City. A week before the engagement, Tan already knew the manner of engagement See wanted. A friend was getting married, and Tan used that as an opportunity to learn what she considered a perfect proposal.

And so, from Manila, he had in his pocket a three-carat diamond ring. There was no way he was checking in that ring. The diamond had belonged to his mom, he said. They had it re-set into the ring.

In the hotel, he carefully tucked it away in a secret hiding place. See, he said, likes to check his luggage and organize his stuff. He didn’t want to spoil the surprise.

He first thought of proposing at the Empire State Building, but decided not to do anything clichéd. Instead, he decided to propose during one of their intimate dinners in the city. But while it’s true that nearly every guy proposes at dinnertime in a fancy restaurant, Tan made sure his proposal was a little different.

It was getting late. They were done with dinner, and the last couple had already left the restaurant. They were talking about the food—See loves to cook and was so engrossed with the subject when Tan quietly put on the table the jewelry box with the ring in it.

“It was perfect! It was exactly the way I wanted it—quiet and private, nothing loud or grand. I was surprised. I saw there was no box in his pocket. I don’t know where he hid it,” she said, giggling.

Tan has always been the marrying kind—and very religious. A devout Catholic, he has never missed a Sunday Mass for six years now. He had been praying for years for the right girl to come along. He once got engaged, at 30, a mistake he didn’t want to repeat.

“For years, I prayed for someone like her. I prayed for a sign. When I was engaged, I also prayed for signs if I was doing the right thing. I dated around for one whole year. It was fun at first, but then it became tiring—starting over again.

“There is always this fantasy that when you meet the right one you’d know it’s the one. There was a time I lost hope. I had almost given up on that. But then one night I met her. It felt right from the very beginning. We gelled very well. We got along well, our principles and family values were the same,” Tan said.

See said she had also been praying for a religious guy. It seemed perfect, but Tan is also superstitious. He had asked her about her birth signs the first time they met—like zodiac signs and animal signs.

He is a sheep, she a dog. In the Chinese belief system, dogs and sheep aren’t good matches. Then there’s the question of the age gap. See is three years younger than he. In the Chinese calendar, three-, six- and nine-year age gaps are not good either.

“I’ve dated women three years younger and three years older than I. Absolute disaster. I saw all this but didn’t let it bother me. I thought maybe it’s not true anymore, because we got along so well,” he said.

After two months of going out, he told his mom he was dating someone seriously. Since his mom believes in all these Chinese traditions, he said, she went to see a Buddhist monk. This monk, said Tan, is blessed with a third eye.

Their birthdays are five days apart, although she’s a Virgo and he’s a Libra. The three-year gap, however, that for a while had Tan worried, is actually just a day apart in Chinese calendar, the monk told his mother. And that means an auspicious partnership for the Chinese.

“It negates the whole three-year thing, that’s why we get along so well. This monk guessed correctly so many personal things about our family so, yes, I believe in him,” he said.

There was a traditional Chinese ceremony yesterday morning. Invited were the right people—carefully selected people with the right birth signs. That means, said See, no rooster, dragon or ox. Their dads, both dragons, are exempted. Relatives left out of this ceremony because they don’t have the right signs joined the reception, where 200 guests, including friends and business contacts, attended.

For the church wedding, See will wear a Veluz creation, while Tan will wear Prada.