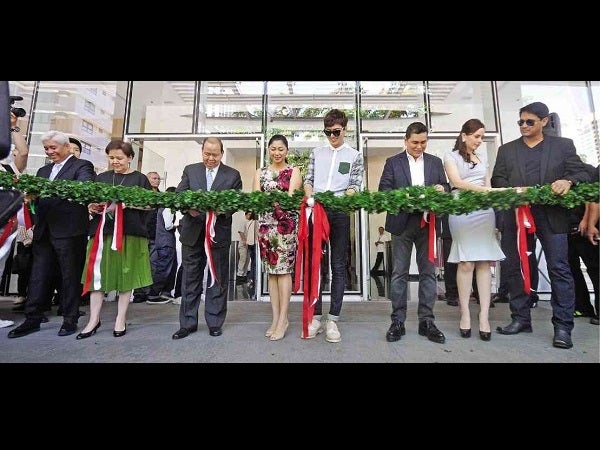 Ben Chan looked happy if nostalgic and somewhat tearful at the opening of the 24-story Bench Tower in Bonifacio Global Cit y, the culmination of his longtime goal—a 25-year dream, to be exact.

“I wish my parents were still here to see this,” Chan said as he paused to chat while receiving guests before the ribbon-cutting of the gleaming steel-and-blue-glass edifice, on the corner of Rizal Drive and 30th Avenue.

A crowd had gathered outside to await the arrival of Lee Min Ho, Bench’s special guest and endorser.

Lee is so popular with Filipino fans that Bench is renewing its contract with the Korean pop star and actor, perhaps the first time Bench is doing this with a foreign endorser, said Chan.

The Bench (Suyen Corp.) founder and chair, with his siblings Nenita Lim and Carlos Chan, unveiled a marker honoring Chan Lib and See Ying, their parents, who migrated from Fujian province in China to the Philippines in the 1940s, to establish Liwayway Marketing. Liwayway manufactured Liwayway gawgaw or cornstarch, which became a household name. (Nenita is the vice president for finance of Suyen Corp. Carlos is the founder of Liwayway Marketing China, which makes Oishi snacks.)

After the unveiling, a visibly touched Ben said when asked how he felt—“Naiiyak ako.”

Bench Tower is Bench’s first building. Majority of its divisions moved into their new home in February, to occupy the top six floors; Chan said several departments have elected to stay in their old offices in Pasay. (The rest are for lease.)

Apart from Bench apparel and its sub-brands, Suyen Corp. has some 31 brands under its wing, including American Eagle Outfitters, Cotton On, Karen Millen, La Senza, Patchi, MDF, Dimensione and Cappellini, all of which hold their offices in the new tower.

The tower was designed by the firm Asya Architects, chosen for their technical experience in constructing buildings in the BGC area, according to Bench in-house architect Miguel Pastor. Chan said he insisted on having a basement, which wasn’t part of the original plan, to create Playground—each of the Bench-occupied spaces has monikers—a space where they could hold pictorials, shows and exhibits.

On opening day, Playground was transformed into a gallery featuring photographs from Ronnie Salvacion’s book, “25 Things I Learned from My Bench Shoots.” The lensman has been shooting Bench campaigns for the last 16 years.)

The building’s walls and floors are of Carrara marble. In the lobby, high above the archway, are the original boat and oars used in Richard Gomez’s “Sculler” TVC for Bench 23 years ago.

Gomez and his wife and fellow Bench endorser Lucy Torres joined Chan’s family and Lee Min Ho at the ribbon-cutting.

Pastor, who took care of the design of the interiors, walked us through Universe—the executive offices on the penthouse level, where, he said feng shui came into play in a major way in arranging the office furniture.

All desks, for instance, face east, considered to be auspicious. A waterfall on the Playground is both a feng shui and design element, added Bryan Lim, Suyen Corp. vice president for business development. All executive offices feature hardwood floors imported from Italy.

The Bench offices have their own gym, a lounge area and an audiovisual theater from where one can see Bench’s billboards in Guadalupe.

The office furnishings are clean and spare; most furniture is a showcase of merchandise from Suyen Corp.’s franchised brands like Cappellini and MDF, save for the office chairs—all Herman Miller Aeron, reputed to be the most ergonomic. A four-meter-long table from MDF, a challenge to bring up to the building, said Pastor, occupies a space in the trophy room, where some of Bench’s many awards are displayed.

At least one artwork adorns a wall of each office; Pastor said they come from Chan’s vast collection.

(A spare room on the penthouse level contains art pieces that are still waiting to be hung on walls. Chan has a catalog of all his acquisitions, according to Pastor, and he simply ticks off pieces he wants to be moved from the warehouse to the new building. At the entry of his formal office, for instance, are two antique glass cabinets, still empty save for a few curios; across them, four foldable wooden cinema chairs from Cubao.)

Chan has a large wooden desk cut from a single piece of timber, set atop piedra stones. Pastor said Chan has had the desk for many years and he refuses to let go of it. It’s his lucky desk.

The chairman’s workroom on the Design Lab floor on the 23rd is a lot more informal and playful with a few pieces of pop art as key elements.

The entire wall across his desk is a bookcase displaying his collection of curiosities and coffee-table books. There are also signed photos of Bench celebrity endorsers, like Taylor Lautner and Lee Min Ho.

Resting casually against the glass wall, with views of a condo complex below, is a portrait of the popular cartoon character Spongebob Squarepants. Behind Chan’s desk, an Andy Warhol bovine portrait and two dress forms. On his desk sits a framed photo of Chan with his mother, and several neatly lined eyeglasses (his formal office also has the same). Pastor also pointed out a quirky mechanical hand, its fingers moving as if on a piano keyboard, at the press of a button. Chan tinkers with it when he’s bored, said Pastor.

Pastor said they were lucky to have found a lot that had unobstructed views of the horizon. His and Bryan Lim’s offices, for instance, face the low structure of the Mind Museum.

Lim’s father, Virgilio, the company president, has photos of his granddaughter, Lim’s child and the family’s first grandchild, next to an Orlina piece. Virgilio’s wife Nenita has the only feminine space in the Universe floor. Adjacent to her desk is a large red sofa and a large vase of red roses atop the low table across it. A pink glass sculpture akin to her husband’s Orlina adorns her office.

A mini-green house occupies a section on the 23rd floor. On the ground floor level is a Suyen-franchised McDonald’s and a soon-to-open Paul, the French bakery brought in by the company.

The Bench Tower is certified by the Leadership in Energy and Environmental Designs (LEED) of the US Green Buildings Councils.

“It’s our first building and we don’t have the experience of having a building,” Chan said, as he pointed out areas that he felt needed a do-over. “If we’re fortunate enough to have another building, it would be nice to correct the things we wanted to correct.”

Was it his dream to have someone like Rem Koolhaas design his next building?

Chan laughed at the obvious reference to real-estate tycoon Robbie Antonio’s home by the famous Dutch architect. Chan said he was eyeing a certain Japanese architect instead, followed by a modest rejoinder: “If we could afford him.”

The retail genius added with a smile, “Hopefully it won’t take another 25 years.”