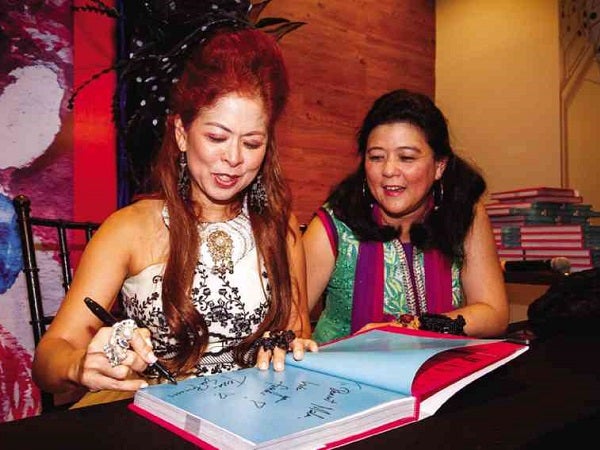 Sea Princess gets a surprise–and cries

TESSA AT TEN Tessa Prieto-Valdes celebrates 10 years as a columnist of the Philippine Daily Inquirer in this surprise bash prepared by husband Dennis and the 10 authors of the book entitled “Tessa” at the National Bookstore in Makati City Sept. 17, 2013. Sandy Prieto-Romualdez, Inquirer CEO and president, was also present in the event. Video by INQUIRER.net’s Ryan Leagogo

Everyone is in on the secret except the host herself. What Inquirer Lifestyle columnist Tessa Prieto-Valdes thought was just another hosting gig to launch Sheaffer’s newest pen at National Book Store’s Glorietta branch last Tuesday turned out to be a surprise book launch that reduced her to tears.

“Tessa: Ten Times Ten,” a 320-page coffee-table book-slash-labor of love hatched by husband Dennis Valdes, is a compilation of Tessa’s best columns since she joined Inquirer Lifestyle as a weekly columnist in 2003.

Dennis and his collaborators, including Tessa’s younger sister Sandy Prieto-Romualdez, Inquirer president and CEO, grouped the columns into 10 chapters: Fashion, Family, Fitness, Fabulous Friends, Fluff and Frippery and Fun Philanthropy, among others.

Instead of reprinting them in full, Dennis took memorable and witty excerpts from each column and placed them alongside miniature versions of Tessa’s pieces as they appeared every Sunday on the pages of Inquirer Lifestyle.

The book also gives Tessa’s fans an inside look at the icon’s life, including beautiful reproductions of her glam shots by Rupert Jacinto and pictures of family vacations and accessories found in her closet. Additional photos were shot by Bobot Meru, Willy Saw, Shaira Luna, Arnel Murillo and Fredrik Lonnqvist.

Dennis started working on the project in the middle of 2012, and thought he’d be finished within three months. Was he wrong!

“It took us almost two years to get it done,” he said. “One, you have to go through each column while choosing the best pieces. Then you have to group them into chapters. To make the book readable, I didn’t run entire columns. Instead, I had to pick one paragraph or just a couple of sentences per column.”

Apart from tapping Tessa’s friends, Dennis chose his contributors based on what they could bring to the book. Alindogan, for instance, was a natural choice for interior design because she is a licensed interior designer.

He tapped Laurel, one of Tessa’s constant collaborators in costume design through the years, not to write about fashion. Instead, he wrote an essay to introduce a chapter on Falsies, Hats and Wigs.

“I didn’t want Rajo to do fashion because he’s also a designer,” said Dennis. “I think Thelma San Juan, as a journalist, would have a fairer, more detached view of the whole fashion scene.”

For a chapter on travel dubbed Far and Away, the honor went to Yap, while Fearless and Feisty, which, said Dennis, is the description that best describes his wife, went to San Diego.

As if sifting through a decade of columns wasn’t enough, Dennis had to constantly remind his collaborators every time he e-mailed them to keep the project a secret. It was difficult, he said, because of the number of people involved in making the book. To make things a bit more complicated, Tessa is very inquisitive.

“I think she knew I was working on something, but she just didn’t know exactly what it was,” he said. “Like she admitted a while ago, she went through my laptop and saw something. It’s a good thing the project wasn’t there. The cover was super secret.”

And because of the time it took to finish the book, its launch became the 50th birthday gift to Tessa, also known as the Sea Princess. She celebrated her golden year in style with family and friends two weeks ago in the exclusive resort-island of Balesin in Quezon.

Minutes before the Sheaffer pen “launch,” Tessa, unmindful of the crowd’s real purpose for attending the event, was still busy chatting with some guests.

In fact, the product launch was just a ruse thought up by National Book Store’s Xandra Ramos-Padilla to lure in an unsuspecting Tessa, who even read cue cards during the program.

The fact that busy people like Laurel, San Diego, Romualdez and husband Philip went out of their way to attend a “pen launch” should have raised red flags. But Tessa, the real pro that she was, read her cue cards until it was time to unveil the product.

Seconds after unveiling the giant reproduction of the book cover, Tessa realized what the event really was. Before her was a blown-up copy of the book cover—a portrait of Tessa in watercolor by Milambiling.

“I still want my Sheaffer pen!” Tessa said in jest, before throwing away her cue cards. Then she started tearing up before asking for another sheet of facial tissue to wipe away the tears.

“I think it’s the first time she cried in public,” said a grinning Dennis.