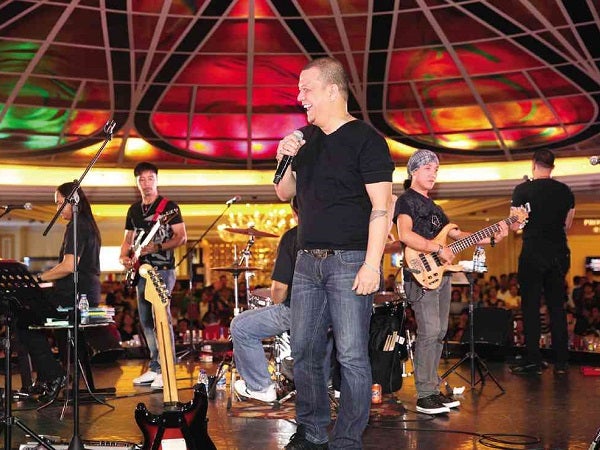 It’s 9 p.m. on a Tuesday and the crowd at the casino of Resorts World Manila (RWM) is distinguished by two opposite expressions. The people playing at the card tables and slot machines look dead serious, while those drinking at Bar 360 talk animatedly—the smiles on their faces punctuated by excitement as they wait for the next music act.

Aiza Seguerra walks down the stage after winding up her one-hour set, nodding her head and shaking hands with some of the audience members she meets along the way.

Glancing at the crowd, we notice that some of them look like contravidas from a Pinoy action movie starring Fernando Poe Jr. The table in front of us is occupied by a bunch of tall, muscular, mustachioed men with demeanors that can probably intimidate the likes of Paquito Diaz or Max Alvarado in their prime.

Around us are groups of middle-aged and senior-citizen women who would likewise feel at home on the set of that imaginary FPJ flick. They all have character—which makes this whole scene poles apart from the staid, generic-looking set of customers normally seen in live music gigs.

“Yan ang mga may pera,” says our friend Serafin Pua, referring to the Bar 360 crowd. Indeed, they may look masa, but they wouldn’t be here if they didn’t have money to burn.

All of them are drinking either San Miguel Pale Pilsen or Light Beer, both priced at P180—almost costing like those in hotel clubs and lounges.

We opt for red wine and try a few of the bar chow items like lemongrass chicken and kilawing tuna while waiting with the rest of the audience for Draybers, RWM’s resident band whose lead singer, Michael Yonting, had just won the title crown last Sunday as “The Voice” (of the Philippines), a singing competition franchise produced by ABS-CBN.

Like some of the audience in Bar 360, Yonting, also known as Mitoy—his character as an actor in an old TV sitcom starring Vic Sotto—is himself a tough-looking character: close-cropped hair, earrings, tattoos, stocky build, and bulging eyes that can be scary if you bump into him on a dark street in Tondo.

Earlier, in a chat backstage at RWM’s Newport Theater where he was rehearsing with other finalists of “The Voice” for a special ABS-CBN show, he tells us that he wanted to be a cop (“Idol ko si FPJ, tagapagtanggol ng mga inaapi”) and enrolled at the Philippine College of Criminology.

But at that time he was already in a band doing regular gigs in beer houses. He dropped out of school and pursued the life of a musician—a profession he first learned as a kid singing along to all sorts of songs on acoustic guitar with the barkada in Caloocan where he grew up.

More than 20 years later he’s still at it, fronting and playing rhythm guitar with the band whose members he met when he got married and settled in Calasiao, Pangasinan. The band, he says, was formerly called Drivers: “Tinagalog ko lang ang spelling, kaya naging Draybers.”

When he finally walks to the stage, the audience at Bar 360 gives him a round of applause; whether or not they’re long-time fans, all of them are happy at Mitoy’s victory and are giving him a hero’s welcome.

It’s our second time to watch Draybers and some things stand out as the band plays a mixed set of foreign and local covers:

Mitoy lets his younger brother, Milo, sing lead in the first few numbers, as well as in some of the other tunes later on, which can mean that Mitoy is pacing himself, or he’s really a generous band mate, not wanting to hog the limelight all the time.

When he takes over the lead vocals, we are again amazed at how he pulls through the high notes in Kenny Loggins’ “Forever,” Starship’s “Nothing’s Gonna Stop Us Now,” Heart’s “Alone,” even the Whitney Houston staple “I Will Always Love You” without sounding forced or strained.

He sings women’s songs like it was the most natural thing in the world. While doing a Sampaguita medley, a matrona stands up and teases him with sexy dance moves. A more difficult medley, consisting of hits by “jukebox queens” Claire, Imelda Papin, Didith Reyes and Eva Eugenio, garners the loudest applause.

Consequently, for Mitoy, there’s no such thing as a baduy song. He even makes an effort to perfect “Now and Forever” and “Making Love Out of Nothing At All”—two Air Supply hits that would have made us cringe in the past—because the audience requests for them.

But what truly blows our mind is that he also gives value to the cool stuff. Near the end of an almost 30-song set, he leads the band on note-for-note versions of “All Day and All of the Night” and “You Really Got Me”—two classics by British Invasion band The Kinks. Nobody plays those songs anymore.

And so, we are thrilled to the bones and shift to drinking SMB Pale Pilsen—its coldness perking up our wooziness.

A familiar face walks by, whom we recognize as Ricky Agana, a high-school batchmate from La Salle Green Hills.

“What brings you here?” we ask.

What a small world.