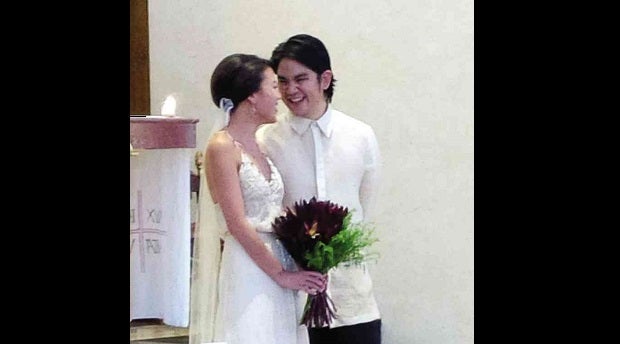 THE NEWLYWEDS share a laugh after the ceremony. PHOTO BY GARLIC GARCIA

Love stories are always beautiful. But when they involve souls destined together, the beauty is accompanied by magic.

Bea Tantoco and Das Reyes pretty much grew up with each other. They met when Das moved to Manila from Vancouver 18 years ago. They became best friends in sixth grade. They would talk for hours on the phone after school every day.

Das’ older brother, Sidd, was also one of the best friends of Bea’s brother, Paolo.

I guess, even as early as then, they both knew somehow that they would end up together.

Then, about a year ago, Bea needed a friend to run to. She sought the opinion of Das who was already quite settled and working in the family business. But, other than wise and mature life advice, something else transpired between the two: sparks.

They quickly went from friends to significant others.

Love, respect, attraction, mutual admiration and the desire to spend every waking moment with each other made them realize that this was more than infatuation, but rather something deeper.

Sure enough, less than a year later, they decided they could no longer live without each other and decided to get married.

The transformation was so apparent to those around them that glee would be an understatement—to describe the reaction of their friends and family.

When soulmates become friends and then lovers, the magic is apparent and visible to everyone around them. When destined souls get together, they help each other become better people and the beauty inside them manifests outward and becomes obvious not only to those who are close to them, but to everyone who sees them together.

Magic was, indeed, what happened on Friday, Dec. 13, when Cristina Beatrice Vargas Tantoco was united in matrimony with Tulsidas Consunji Reyes in the neighborhood chapel of Montecito, Laguna.

The reception was held in the beautiful residence of Bea’s parents, Rico and Nena, in Sta. Elena, Laguna.

Everything about the wedding was a personal expression of Das and Bea who were very involved in the planning.

The wedding gown, one of the most beautiful I have seen, was designed by Bea and her sister Katrina Tantoco Lobregat. Bea wore it with such ease and elegance.

The theme was modern Filipiniana.

The table runners in the reception were specially ordered inabel from Ilocos, an indigenous fabric from the Visayas.

Every detail bore the personal touch of the bride and groom. The bride’s mother, Nena Vargas Tantoco, and the groom’s mother, Jing Consunji Reyes, also had their inputs.

Rachel Martelino and her team, the Bride’s Maids and Co., were on hand to make sure that everything flowed with gracious elegance, and so were Margarita Fores and the Sta. Elena management team.

Close friends and family were in attendance.

The whole day was a tribute to the love and joy these two newlyweds have brought not only to their own lives, but also to those of everyone present to share the special day of Bea and Das.