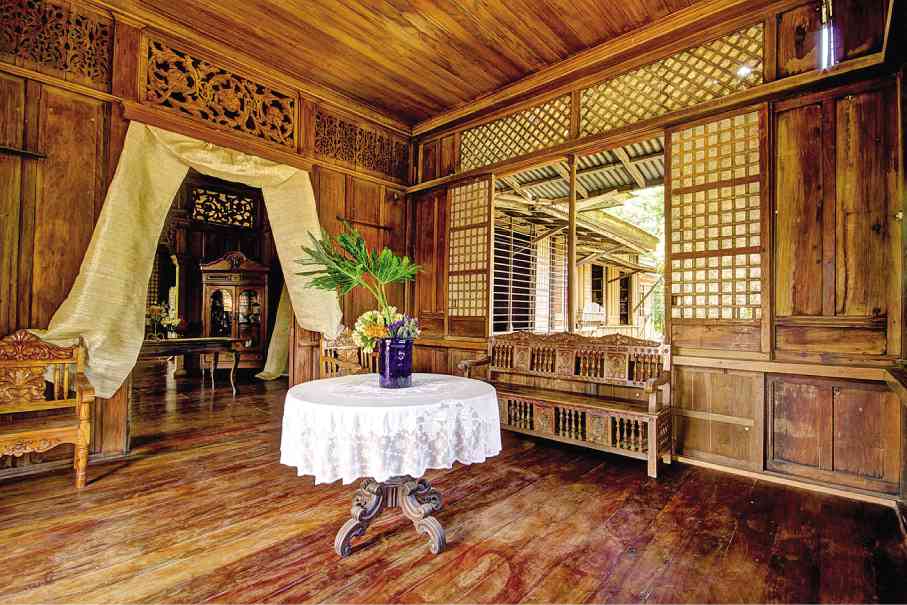 Ditta Sandico’s grandparents Manuel Sandico and Pilar Hizon built the house in 1927. In this house, Ditta’s father, Fernando Hizon Sandico, came into the world. Fernando was the fifth in a happy brood of eight children, with Mayorico, Pergentino, Benito, Luz, Caridad, Orosia and Donatila.

Sitting on a 4,000-sq m property, the structure is surrounded by big and leafy fruit-bearing trees. Santol, duhat, chico, macopa: fruits one hardly ever sees in city markets nowadays.

Completed during the American Period in the vernacular style of the 1920s, the house has some distinct Antillean architectural and decorative details evidently dictated by the light and weather conditions of the tropics.

Wide windows, slim wooden columns topped with carved details, the small porch and balcony, decorative brackets, cutwork and tracery on the eaves show its similarity to Bahamian and Creole houses from the same period.

Belying the stillness of the house’s appearance from the road is a mission behind it. But wait, we are getting ahead of our little story. The stillness is also partly because the house has stood there for some time, a slowly decaying testament to slower times and the daily rhythms and ablutions of a well-to-do family living in Mexico, Pampanga, a riverine town that was a lively crossroad for goods being traded up and down the river.

Ditta hardly spent much time in her grandparents house, but recalls going there for summer vacations.

Away from the traditions and peculiar rituals of living in the province, Ditta never knew then what she missed.

After all, she was at home in the city.

In time, the wear and tear of life, raising a family, making her name as a designer, and the whole business of living had taken over.

Before Ditta knew it, she had done it all. There was more time now to put something else at the heart of her life: the old house, the old hometown, her kin, her roots.

The last time she checked on the house was when she went to see if a party could actually be held there. After that visit, she convinced her father, who now lives in the city, to celebrate his birthday there in the old house.

Her father balked at the proposition, saying his guests were too old to be waiting in line to use the restrooms. Because of this, Ditta made a few minor improvements, including a new powder room on the ground floor, and her father was able to have his party.

This little act of consideration was actually what jump-started her desire to fix the old house. After months of thinking about going back to her roots, the whole rehabilitation thing took a much deeper footing.

“It finally dawned on me that I hadn’t the faintest idea of my roots and could not figure out where to start to connect the dots. So, I set out on this journey to find some answers to all these questions running in my mind: Where else are we going? What are my origins? With a handful of relatives in tow, and a lot of courage on my back, I formed a circle of interested and like-minded souls to restore this beautiful home where my ancestors lived,” she said.

It was a good place to start, but the work ahead was daunting. This was no small challenge. This would be Ditta’s leap of faith.

She started by checking the house’s main frame. Though its bones had held up, the roof was ready to lift off with the next typhoon. The kitchen and pantry area had to be rebuilt.

With the help of architect Warren Santos, Ditta made a complete assessment of the structure’s foundation and discovered the extent of work to be done.

Its structural state was salvageable. The floorboards remained intact with no signs of rot. It was promising.

Ditta became even more resolute in her mission when she thought of the skilled work of craftsmen who did all the carvings and moldings. Saving the house was preserving their craftsmanship for future generations.

“After checking the condition of the house, assessing the cost of construction and committing to be on top of things, I took the plunge. Facing the different views of half of the family voicing out opposing opinions was less of a problem, since my team decided not to focus on the negatives but instead on the task of restoring the ancestral home,” she said.

“I had my apprehensions about taking this role, and little did I know that things would take twists and turns. Every time I visited the site, there were unforeseen costs and mounting bills. The budget allotted was dwindling, and there was a never-ending stream of things to do. But the time spent was well worth it. It opened doors.

“I began to discover friends and relatives. Bumping into people I never realized were my cousins, uncles and neighbors. This was a new world to explore.”

As rehabilitation work continues, Ditta stumbles on more stories and recollections from her relatives who regale her with anecdotes and historical footnotes that endear her even more to the house and the town of Mexico.

“I hear stories of how my great grandfather Gen. Maximino Hizon, a product of a Malabon-Guagua-México Chinese mestizo family alliance, rallied Kapampangans in 1898 to fight the Spaniards under Emilio Aguinaldo’s revolutionary banner; of how well my grandmother Pilar Hizon Sandico cooked and whipped out those delicious dishes Pampangueños are so proud of. Or simply, what it was like just to ride a bicycle around the neighborhood in Peacetime.”

Bale Mi, as Ditta calls the house, means “my house” in Kapampangan. It is Ditta’s bridge to the past, and provides a sense of continuity.

“We have plans to use the house as museum, art gallery and events place, where people from all walks of life can revisit their past and connect with the future. Our vision is to make Mexico City come alive, a place where we can trace our roots, go back to memories, and live with treasures we can call our very own,” she says.

“I liken this endeavor to these words: What the caterpillar calls the end of the world, the Master calls the butterfly. There was that time I was locked up in my own cocoon, feeling sorry for myself. Bale Mi became my little cocoon where I could literally spin my beautiful silk fiber.

“Ironically, the caterpillar stage was worth enduring. Now, the ugly caterpillar has turned into a butterfly ready to take flight on her wings of light.”

Bale Mi was launched on Jan. 12 with an open house for friends and relatives of the family. Visit dittachannel.com for more information.