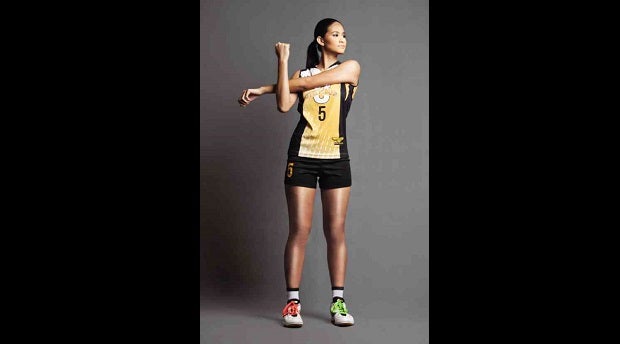 High school life is tough, but student-athlete-model Pauline Gaston says you can lick it as long as you believe in yourself. Blessed with beauty and brains, this 5’8”-tall girl shows how a teenager can deal with the rigors of academics and have fun at the same time.

Pauline is a junior at the University of Santo Tomas (UST) Pay High School and a member of the UST Girls Volleyball Team. At 16, she has played for three UAAP seasons, two Shakey’s Girls Volleyball leagues, and has walked for fashion shows of designers like Albert Andrada and Joey Espino, as well as with clothing brand Penshoppe.

Pauline was raised by a beauty queen mother and a sports official father in Parañaque. Growing up, her sister Therese described her as a tomboy who became lady-like only when she reached 14.

In Saint Pedro Poveda, Pauline started liking to play volleyball. When she moved to UST, she got serious with the sport.

She was in Grade 6 when her sister Therese first invited her to join the volleyball team in Poveda. Pauline decided to move to UST Pay High School hoping to participate in its volleyball program. At that time, Therese was already a member of the UST volleyball team.

Pauline narrated the difficulty of being a rookie. She was always reminded of her sister’s advice. “My sister always tells me never to complain because she’s been through with what I was experiencing,” Pauline recalled.

Now on her third year with the UST team, Pauline is determined to pursue athletics with passion, promising that she will train harder to reach her goal.

“My target for my remaining playing year in USTHS is to get an athletic award. It will be one of my goals,” she said.

For her, the athletic life is serious, not something people do just for fun.

“One must learn to sacrifice and push limits to do better. This is the life I chose and striving harder is how I push myself to be better. It’s not easy, but I love it because I know it will be worth it in the end,” she said.

Long hours of training can be exhausting, but she doesn’t show any signs of fatigue.

“Giving up is not an option. The only option for an athlete is to try harder, do better and achieve more,” she pointed out.

But with her height and attractive facial features, Pauline didn’t have difficulty entering the world of fashion. She started modeling at age 14. She never had professional model training, except a few things she learned from her mother. She looked up to supermodels Danica Magpantay and Cara Delevingne.

Joining the Penshoppe Holiday 2012 show was the most memorable among her fashion experiences. She narrated how people at the casting call were impressed when they found out that she was only 15 years old.

“Walking for Penshoppe was great. When I got a phone call saying that I got in, I felt really happy. For me, it meant that they saw a potential in me, that’s why they put me in the show,” she recounted.

But Pauline said that modeling for her is just for fun. She  does not consider it a real job. Asked if she has plans to keep modeling as long as she enjoys it, she said that she had yet to decide.

But one great thing about Pauline is that she juggles everything perfectly. Extracurricular activities do not prevent her from attaining the highest grade point average in her class.

“It is important for me to know my priorities. Even though I’m an athlete, I know that academics should and must always come first,” she said.

Pauline added that, even during exam week, she is required to train with the volleyball team. But she always find time to study despite her very busy schedule.

Sometimes she just wants to sleep or be engrossed in social media. “But I can’t do those things. I always wonder why I hear my classmates complain about not having time to study, when I’m able to do that and still do training,” she said.

But as far as priorities are concerned, it’s studies first before sport. She said volleyball and other stuff will always be there, but academics was something that must be finished above anything else.

In the future she wants to become a teacher. Her interest in education started when she interacted with her cousin who had autism.

“I want to invest in building the future of young people,” Pauline said.

For her, success in life comes with humility, passion and motivation.

“Athletes should explore many things, strive harder and focus. If you dream, don’t let it just be a dream, make it happen. And while you’re young, you are responsible for making your dreams happen. In order for that to happen, you must believe in yourself,” she said.