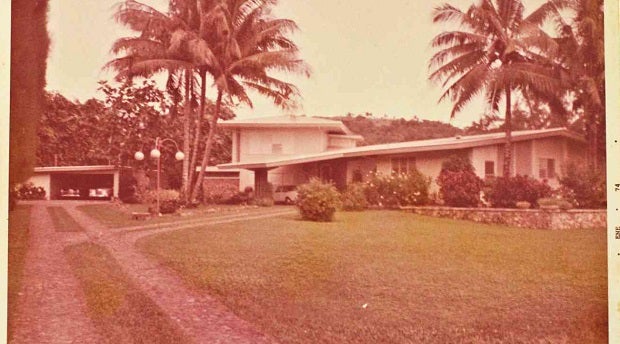 SPRAWLING GROUNDS. While Don Luis wanted it as a farm, his wife Doña Maria relocated her furniture business Mehitabel in the 3.2 hectare property on Sanson Road. This two-story, four-bedroom house was built to keep her in close proximity to the factory.

Now flanked by a PTT gas station on the right and Anita’s Bakeshop on the left, Sanson Road in Lahug, Cebu City, was named after lawyer and councilor Hon. Miguel R. Sanson.

He himself didn’t live in the clan’s massive property found at the end of the road; instead, he, his wife Soledad Duterte, and their adopted son and daughter lived in the family’s other sprawling estate across, right behind where the JY Supermarket stands today.

Mem Castillo La’O, whose father served as Miguel’s personal physician, was a neighbor of the Sansons and a close friend of the councilor’s daughter, Luz. Afternoons found Miguel relaxing with a cup of coffee while the two girls played without a care in the world.

Once used to pay taxes (in 1889), the 3.2-ha tract on Sanson Road would first be divided into a subdivision, then sold by the family to various buyers through the years. By the time Don Luis Aboitiz purchased the expansive property after World War II, he had sealed the deal with a farmer.

If he had his way, Aboitiz, the shipping magnate with an apparent love of farming, would have planted rice, corn and fruit-bearing trees in the property. But his wife, Doña Maria Montenegro-Aboitiz, had other plans. A pioneer of Cebu’s furniture industry (among her contemporaries were the parents of celebrated Cebuano furniture designer Kenneth Cobonpue), she relocated her thriving rattan furniture business, Mehitabel, here.

Founded in 1947 and named after the alley cat who is best friends with the poetic cockroach Archy in Don Maquis’ 1916 New York Evening Sun column, “Archy and Mehitabel,” Mehitabel Furniture, Inc. was originally situated on Mango Avenue, near St. Theresa’s College of Cebu City.

Built in 1956, Mehitabel on Sanson Road comprised a factory (actually, five buildings, for every stage of the furniture-making process) as well as a two-floor showroom with a walkway that offered easy access to the factory.

A spacious two-story, four-bedroom residence was also built next to the factory, as Doña Maria was accustomed to keeping close supervision of her business. Guests were accommodated in the pool house across the lawn from the main house, and the swimming pool was where workers scrambled for water to put out a fire that had broken out in one of the buildings. A bahay kubo where the Aboitiz apo used to play still displays the children’s colorful drawings.

Even with the existing structures, there was still plenty of room within the grounds for Doña Maria to host private gatherings.

A tireless philanthropist, she welcomed members of various charitable institutions into her home and supplied seed money for their causes.

One unforgettable house guest was the Blessed Mother Teresa of Calcutta; after visiting twice, she kept in touch with the Aboitizes by sending Christmas cards for several years.

American furniture maker John McGuire was another guest. In a show of true Filipino hospitality, Doña Maria organized barrio fiestas whenever he or any other major Mehitabel client was in town.

Complete with all the elements of an authentic fiesta—those in attendance were in full Filipiniana regalia, and folk dancers were hired to perform the tinikling—the parties were always a precursor to Mehitabel business meetings.

Of Doña Maria’s five children, only her younger daughters Cecilia (who resides in Manila) and Victoria (now based in the States) lived in the house.

In the 1970s, when the matriarch fell ill and became bedridden, her eldest Josephine Aboitiz-Booth would move in and oversee Mehitabel’s operations, ultimately expanding its market to Japan, Europe and Australia.

Today, Booth, Mehitabel’s managing director, is like her mother, a pioneer in her own right: She’s a founding member of the Chamber of Furniture Industries of the Philippines’ Cebu Chapter.

The mid-’80s saw a third-generation Aboitiz step in. After studying and working in the US, Josephine’s son Robert Louis “Bob” Booth flew back to Cebu and joined Mehitabel as its president. He even lived in the Sanson Road house—with his wife, their six kids, seven dogs and 15 cats!

He would be the last Aboitiz to do so.

In 2013, the lot at the end of Sanson Road was sold yet again, appropriately to a family of similar prominence as its previous owners.

Rockwell Land Corporation, the premier property development company of the Lopez Group of Companies, purchased the estate from the Aboitizes for a project that blends Rockwell’s reputation for upscale residences with Cebu’s signature laid-back lifestyle.

With its verdant landscape and wide, open spaces, 32 Sanson has five five-story residential buildings with one-, two- and three-bedroom units and exclusive amenities that encourage an active outdoor lifestyle.

The start of this exciting chapter in the Sanson Road story marks the bittersweet end of another.

Though a larger Mehitabel factory still exists in Talamban, there are no traces of the one that once stood next to the house where Doña Maria lived.

Attempts were made to work around that, the swimming pool, pool house and bahay kubo; in the end, however, they only compromised the intended site plan. Eventually, these structures will give way to the development when it reaches its second phase two years from now.

Only the showroom, which has since been converted into Rockwell Land’s Cebu sales office, will remain intact and move to another property nearby.

“It’s been relinquished with a little bit of sorrow, shall we say,” a member of the Aboitiz clan admitted wistfully. For now, this family can take heart in the fact that the place that holds many dear memories for them is now in very good hands.