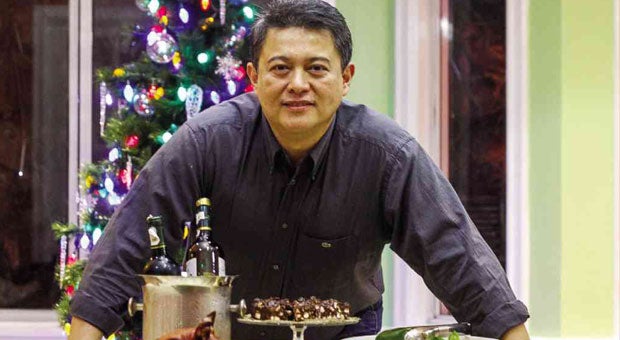 There’s a sarcastic term that goes with eating lechon and other fatty foods: pampa-bata, because you might end up sleeping eternally earlier than expected.

But to sample cochinillo, or roast suckling pig, is a mouth-watering idea—even as we are worried stiff about dealing with hypertension.

A cheerful guy who has engaged in such cool, glamorous jobs as DJ and photographer, Tinee is now known among media friends as Mr. Cochinillo—after breaking into the food scene last year.

“I don’t know if I’ll take it as a compliment,” he laughs at the moniker, while admitting that his build could match that of a serious foodie.

He started selling cochinillo in October 2012 by chance. “A friend was hosting a party for his son and wanted to rent my photography studio and have food served,” recalls Tinee, who suggested different kinds of food including cochinillo.

His friend changed his mind and decided not to rent the studio anymore; he asked Tinee to just cook cochinillo.

“Ayokong mapahiya, so I accepted the order. I had four weeks to produce it,” says Tinee, adding that it took roasting four piglets before he was happy and confident enough to sell one.

At the party, the caterer asked him how he cooked the cochinillo. “Sabi ko, order from me na lang. And he did. Naging twice a week,” Tinee recounts.

These days he gets regular orders every week, which means cochinillo is popular not just at Christmastime.

Tinee says that he got into cooking because he loves food. He remembers his childhood days when his mom and grandparents served delectable dishes.

And then he discovered brick ovens. “I was interested because I wanted to do traditional slow cooking,” he says. “Slow-cooked food softens the meat and intensifies the taste. It becomes more flavorful. I wanted to try cochinillo because it’s hard to find.”

Cochinillo is actually a piglet that is just three weeks to a month old and is still breast-fed by the time it is prepared for roasting.

Lechon de leche is still cochinillo but bigger, almost on the verge of being weaned from the mother pig.

Tinee says that although it’s a Spanish dish, lechon has been around for a longer time. “It’s part of Malay tradition, a ritual. You have something slaughtered and cooked. When you talk about handaan, the lechon is the table centerpiece. If you’ll eat lechon, might as well eat the best kind.”

Cochinillo, he says, is healthy compared to the regular lechon.

He sources the piglets from free-range farms. He has an agent who looks for backyard pigs. “I look at the pigs, how they’re built,” he says. “Siyempre you don’t want the small and scrawny ones, dapat medyo gwapo. I shave their whiskers. I groom them. Some farmers feed them beer before slaughtering.”

The cochinillo is roasted in customized, charcoal-fired brick ovens in Tinee’s house in Pasig where it is picked up by clients. He accepts deliveries but only in nearby areas.

He sold his first cochinillo for P4,000. Now it’s priced at P5,500 and comes in a native tampipi with a handle.

He calls his dish Cochinillo del Cielo, hyping on its “heavenly” taste.

Not a simple process

Roasting cochinillo, Tinee says, is not a simple process: “You listen to it, the sizzle, you look at how it appears, how brown it gets, and then you smell. The senses come into play. That’s how you know how much time it needs to get done.”

He’s very particular about pickup time because the meat, he says, is still cooking when the cochinillo is in transit. “You have to let it rest. It’s like, when I let the piglet out of the oven, I don’t chop it right away, because it stiffens.”

The most difficult part, he says, is consistency in taste. “I’ve tried other cochinillo, even at my favorite restaurant. But mine is a bit more attuned to the Filipino taste.”

There’s a marinade that he himself mixes, including olive oil.

All this talk whets our appetite even more. Tinee goes to his roasting area adjacent to the main house and, after several minutes, returns with a newly cooked cochinillo. He serves it with lettuce salad and red wine.

The smoky flavor is irresistible. With a bit of nervousness we chew on the first few slices of the meat. It is so soft it almost melts in the mouth.

It doesn’t come with a sauce. “There’s not much time to dip it in sauce anyway,” says Tinee, “because it’s usually gone in a few minutes.”

It’s impossible to ignore the skin due to its crispiness, but Tinee says the best part is the loin, which we have been munching on. The cheeks are also good, he adds. Well, that’s what beer drinkers love, sisig. There are people who fight over the ears, he points out. Uh-oh, that’s what we love, because cartilage has less fat. We keep on eating.

Tinee says he found out it’s good to eat cochinillo with pan de sal. But he doesn’t eat it every day. “And if there are orders, I cannot consume my own product,” he quips. “It’s like what Al Pacino says in ‘Scarface.’”

Tinee plans to introduce other kinds of slow-cooked food under the trade name IHor (International House of Roasts). “Roasting is healthy,” he swears. “The food is cooked in its own natural juices.”