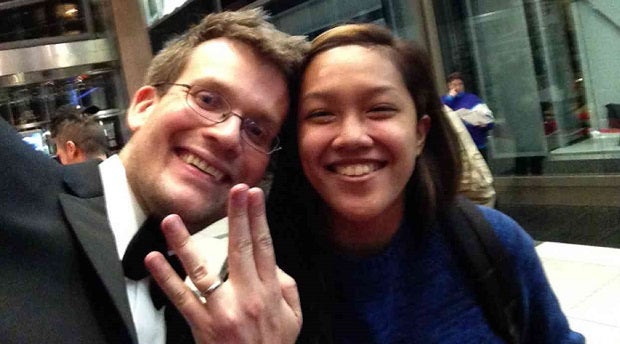 SELFIE MASTER John Green and a fan outside Jazz at Lincoln Center. PHOTO BY PAM PASTOR

It’s not easy being (John) Green

I met John Green one May night in New York, just a couple of hours after he was honored at the Time 100 Gala at Jazz at Lincoln Center.

The magazine included him on its list of 100 Most Influential People of 2014, calling him “the teen whisperer.” As if to underscore this moniker, young girls stood outside the Lincoln Center, waiting by the red carpet, hoping to catch a glimpse of the book author.

Other people were honored at the party—celebrities and philanthropists, politicians and journalists, scientists and athletes. They spilled out of the venue one by one. But most of the fans were waiting for only one person: John Green.

Long before Time took notice, teenagers have gravitated to John. He’s like a pied piper for young adults. Maybe it’s his best-selling novels, which are so moving and beautifully written that even adults couldn’t resist reading them. Or Vlogbrothers, the video channel he shares with his brother Hank, which led to the creation of Nerdfighters, a group of people from all over the world who are devoted to “decreasing the suck and increasing the awesome.”

It could be the way he connects with them.

John speaks the language of young adults so well that he’s been called a 36-year-old teenager. (“This Time 100 thing is nuts” and “This is so weird/awesome,” his Instagram captions read on the day of the gala.)

We think it’s a combination of all these things.

“Is John Green still at the party?” a girl asked one of the tuxedoed men who had just exited the elevator.

The girls gasped: “John Green!” They surged forward, a tangle of arms and faces, all seeking autographs and selfies. John accommodated them all.

“Please hug my daughter,” a mother said, her voice thick with an Italian accent. John obliged.

“Please hug her again. I want to take a picture,” the mother said. John repeated the gesture. She was clutching a worn copy of “The Fault in Our Stars.

“Is that your wife?” the mother asked John, pointing to the smiling woman who was waiting for him.

John stopped right in front of me and saw me fumbling with my phone. “I’ll take the selfie,” he said, taking my phone. “I’m really good at this.” I was charmed.

Three days later, I walked into the Crosby Street Hotel in Soho for the press screening of the movie adaptation of “The Fault in Our Stars,” John’s best-selling book about Hazel Grace Lancaster and Augustus Waters, two teenagers who meet in a cancer support group and fall in love.

I surrendered my phone and, clutching my notebook and pen, a bag of M&Ms and a wad of tissues, found a seat inside the screening room.

I knew I was going to cry—even the trailer made me shed tears when I first watched it on YouTube. I just didn’t think I would cry that much.

Halfway into the film, I was so paralyzed by my tears that I had to put down the bag of M&Ms. You know it’s serious when you put down your bag of M&Ms.

The movie is so faithful to the book and the love and care that went into making it were obvious. There were surprisingly upbeat and laugh-out-loud moments (I love the egging scene) followed by heart-wrenching scenes that will make you ask, “Why the hell am I watching this alone?” (You’ve been warned: Don’t watch it alone.)

It was a beautiful journey, one marred by fear that I wouldn’t be able to slip out of the hotel undetected after the screening. I needed to claim my phone and that meant people would see the idiot who sobbed at the press screening.

But I soon noticed that I wasn’t alone. I heard people sniffling and weeping all around me. John, the filmmakers, and the cast had succeeded in reducing a room of jaded journalists into puddles of tears.

After the screening, people with puffy eyes talked about the movie.

“That was emotionally exhausting.”

“I need to watch it again.”

I walked out of the hotel and resisted the urge to grab people on the streets and say, “You don’t understand what I just experienced.” Instead, I got on the subway, still red-faced and swollen-eyed, and texted my friends.

Two days later, I saw John again. He was at the Crosby Street Hotel with the cast for a press conference (see related story). There were more fans inside and outside the venue, their copies of “The Fault in Our Stars” covered with Post-It notes.

A few of them were able to grab seats at the press con and after, just before he went offstage, John flashed them the Nerdfighter sign.

“I want the movie to do well but to be completely honest with you, ultimately, what I want is for people who care about the book a lot to like the movie,” he said in a recent vlog to his brother Hank.

Based on the reactions we’ve seen in New York and at the Little Infinities screening in Manila, John Green has nothing to worry about. Okay? Okay.