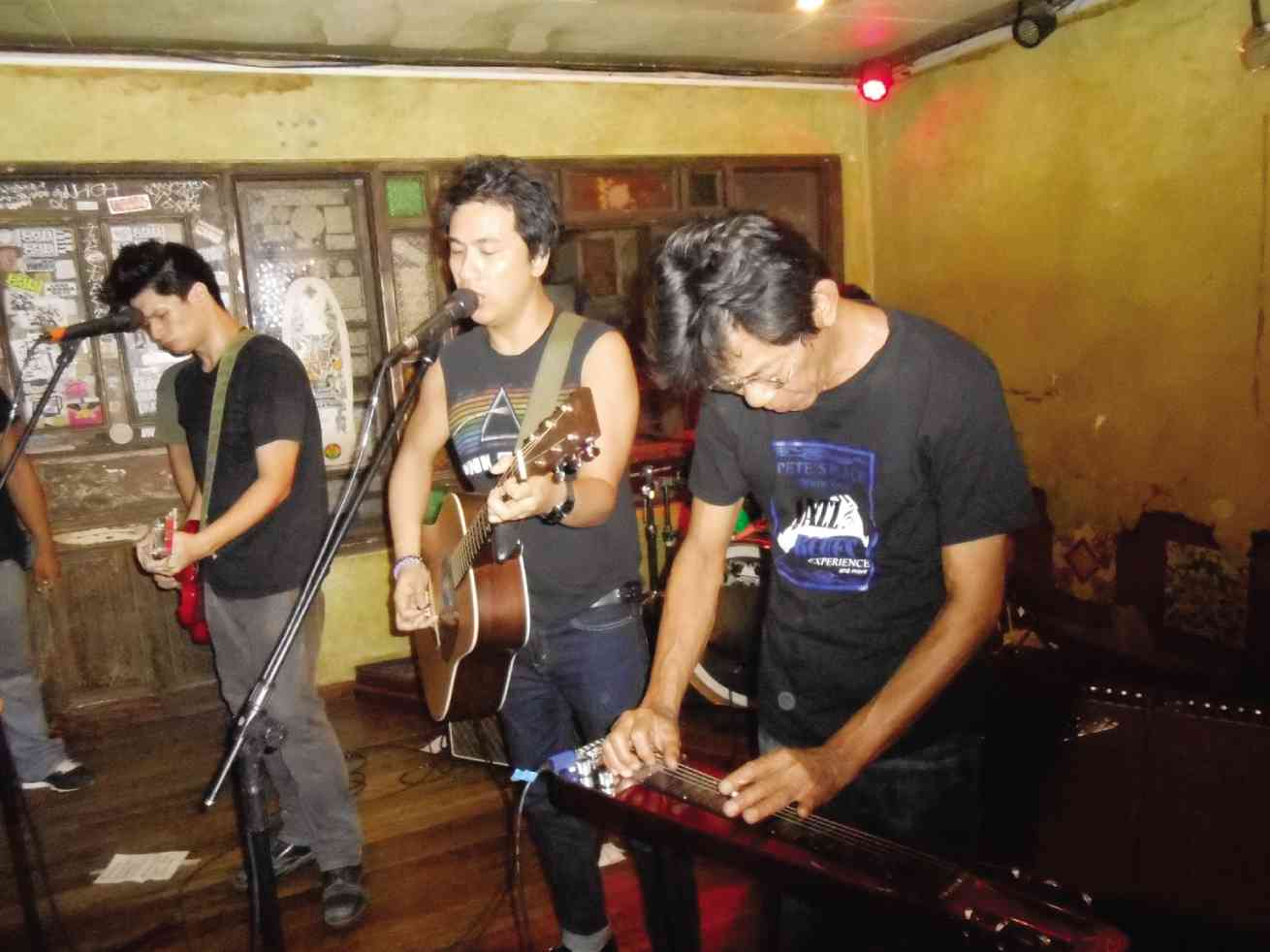 Saguijo is a rock club that was born, in the words of owner Chris Carlos, “in the spirit of the late, great Club Dredd.” What he meant was that saGuijo—named after its location on Guijo Street in Makati—is a venue of unknown but talented bands that play their own music, or at least do covers that have yet to be heard on TV variety shows.

Some eight years after it opened, saGuijo has kept the fires burning—continuously nurturing raw talents who play alongside rock stars who, despite mainstream success, never forget their roots.

Two of these rock stars, Ely Buendia and Raimund Marasigan, showed up recently at saGuijo to play in a benefit gig for guitar hero Jun Lopito.

Lopito was himself a rock star back in the day when Buendia and Marasigan were still babies. A former member of Anak Bayan as well as The Jerks, and the favorite sideman of Joey “Pepe” Smith before pursuing a solo career, Lopito has been suffering from complications of Hepatitis C and needed financial assistance.

Buendia and Marasigan, back from London after their latest reunion gigs of their old band, The Eraserheads, were on the benefit bill with their current groups, The Oktaves and Sandwich, respectively.

The Eraserheads first made a name at Club Dredd, whose co-owner, Robbie Sunico, was also its first manager.

Sandwich was on its last few songs when we arrived at saGuijo. The band played tightly, Marasigan howling like a punk in “Procrastinator,” one of the group’s original compositions.

Catching some fresh air at the saGuijo parking lot, we bumped into Stephen Lu and Nitoy Adriano, who also spent many nights at Club Dredd—Lu as frontman of Rizal Underground and manager of Binky Lampano, and Adriano as guitarist of The Jerks.

Moments later Buendia arrived and briefly joined us for some small talk. He did well in recruiting Adriano as lead guitarist for The Oktaves, we told him. It would be great, we added, if Adriano could play again with Chickoy Pura in a Jerks reunion, even for a night, for Lopito’s sake.

The Flippin Soul Stompers, with frontman Bing Austria, was playing when we went back with Lu inside to buy San Miguel Pale Pilsen, which thankfully was ice-cold—effectively countering the hot and humid temperature at the club. Which reminded us that it was also that hot at Dredd.

Austria—incidentally another Dredd habitue by virtue of his being once a member of Put3Ska—led the Stompers in a spirited version of “Dancing in the Street.”

While drinking beer outside, we were updated of Lopito’s condition by Skarlet, still another Dredd regular when she was still Myra Ruaro of Ardourn Delirium and, later, Put3Ska. She was seated at saGuijo’s gate, supervising the benefit gig.

When The Oktaves started playing, we made sure to be in front of the action, anticipating the band’s three-pronged guitar attack: Adriano on lead, Chris Padilla on second lead and rhythm, and Buendia on acoustic.

Its choice of The Allman Brothers Band’s “Jessica” as opening song was a glorious blast from the past—Adriano’s axe “singing” the instrumental number’s melody with such emotion that it felt like having a joyride on a lonesome highway.

What followed were some rockabilly-style originals, with Padilla on lead vocals. Just like Sandwich, The Oktaves played with tight dynamics, bringing a smile to Buendia’s normally stoic face.

It was also quite a sight when Adriano played on a pedal steel guitar.

Back outside for a breather and more beer, we saw two other good friends from Dredd days, Nonong Timbalopez and Edgar “Par” Sallan.

Timbalopez was actually Lopito’s drummer after playing with Yano, which at its peak in 1994 was as famous as The Eraserheads—both bands getting paid P100,000 for a concert in Cebu; and Par was manager of the Ex-President’s Combo and used to produce a brilliant radio show on NU 107 before returning to his passion, as a DJ in various clubs.

It was like old times, indeed, with old friends in the house chatting and laughing till the wee hours, promising to keep in touch and call more friends, especially doctors and those with resources to get Lopito back on his feet so he can do what he does best: play guitar.