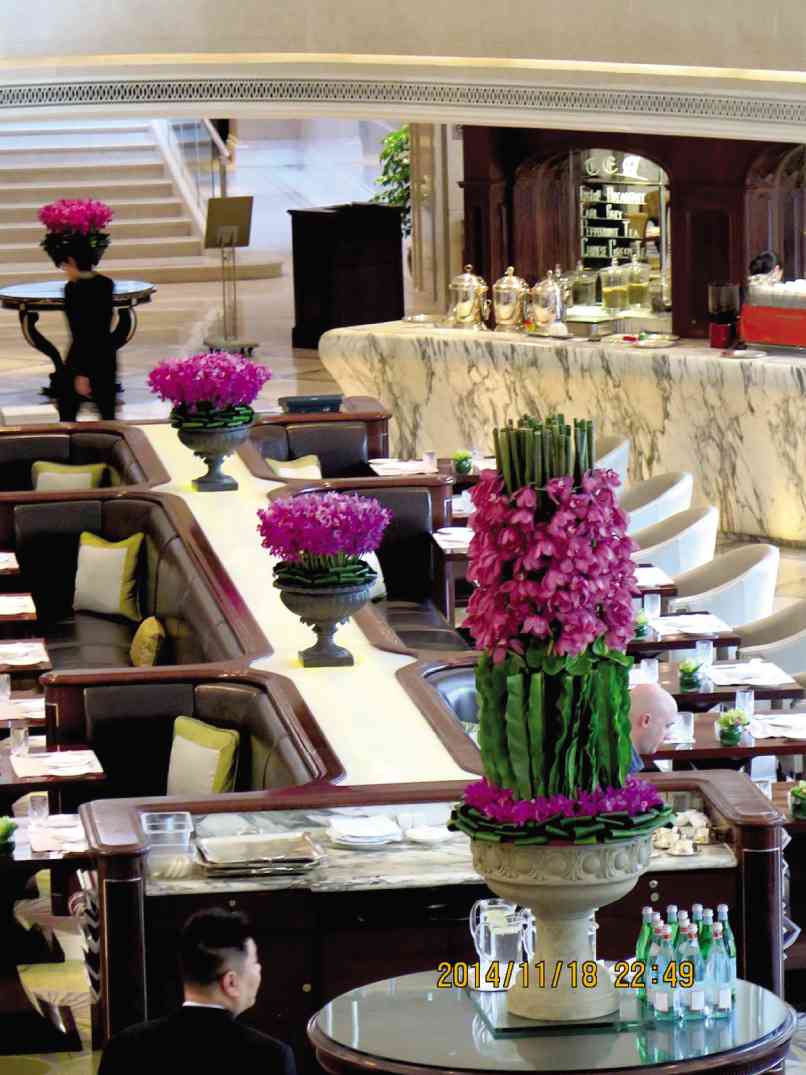 “Pagkain” is the title of the food photography exhibit that was recently launched at the Renaissance Shanghai Yangtze Hotel in China. It features the food images of Neal Oshima, accompanied by text I had written, both taken from the book “Kulinarya: A Guidebook to Philippine Cuisine.”

Oshima and I were invited to the launch, a project of the Department of Foreign Affairs with the Philippine Consulate in Shanghai and the National Commission for Culture and the Arts, and also sponsored by the Asia Society and the Filipino Heritage Festival, Inc.

The event was a brief introduction to the flavors, ingredients and procedures of Filipino cooking, a glimpse into its culture and people through food.

Consul general Wilfredo Cuyugan cut the ribbon, assisted by Eddie Wong and Juergen Sterkau of the Renaissance Hotel, and Mita Rufino of the Filipino Heritage Festival.

We hoped the walk through “Pagkain,” with English translated into Chinese characters, whetted the appetites of the guests for the banquet that followed, which launched as well the week-long festival called “More Flavors of the Philippines.”

It was prepped and cooked by Bryan Salarzon, sous chef at the Marriott Hotel Manila. While he consulted the book “Kulinarya,” he said most of the recipes were his own and from the Marriott menu offerings.

Except for the presidential table, food was served family-style on the lazy Susan. The soup course was nilagang baka (boiled beef brisket), followed by fish kinilaw (ceviche), which was featured in the exhibit as the oldest way of preparing food in the Philippines.

Rice came last, as is usual on the Chinese table, but not long after the mains were brought out. While the dishes were tasty, it would have been better if there were condiments on the table to emphasize that Filipinos like to personalize their food with their choices of sauces and pickles.

Dessert had samples of maja mais (corn custard), pastillas balls (milk candy) and buko pandan (young coconut with screwpine gelatin). Chef Salarzon said he wanted to make cassava cake but the grated cassava he froze and packed were spoiled when he arrived in Shanghai.

Dessert was also the signal to start the evening’s performance by the Bayanihan Dance Company, which demonstrated the richness and variety of Filipino music and dances, from the Cordilleras to the Mindanao and Muslim tribes, through the Spanish period including pastoral scenes of merrymaking. Pinoy cuisine, like its dances, is as rich and varied.

Being in another country should mean tasting the cooking there as well. In our last column, we recounted our singular hairy crab experience. This time our guide was my niece, Sara, and her husband, Robby Reyes, who is a landscape architect in Shanghai. They and their twins, one-year-olds Nate and Ethan, and Robby’s mom, brought us to their favorite dining place, Fu Chun Xiao Long on Yuyuan Road.

You can guess that its specialty is xiao long bao, or small basket dumpling of pork, shrimps and crab—the best we’ve tasted so far. Many of our meals included this Shanghai specialty with a hot broth inside.

Since very few people speak English, save for the vendors in the shopping malls (“How much you get?” “Is cheap…”), ordering food can be daunting if you’re on your own. We had to

resort to pointing dishes at other tables, not even sure if that was polite.

But one lunch we will always remember was at the wholesale vegetable market. After marveling at the produce—green, fat, leafy vegetables, huge radishes, a variety of mushrooms, perfectly round, big, red tomatoes—we wondered where to eat near the place. We were directed to a building, on the second floor of which was the market’s sort of canteen.

A man who had finished eating, but who knew we needed help, told us through sign language that we needed to pay first at the cashier. For 10 RMB (about P70) each, we had a feast of many home-cooked dishes—braised duck, several vegetable dishes, squid, shrimp, humba-like pork and rice. Everyone, including drivers, vegetable handlers and vendors, were amused at our group as we relished “local” cooking. One could say it was an authentic farm-to-market-to-table kind of place.

A must-visit is the long row of historical buildings called The Bund. It’s like an outdoor museum and one gets a sense of its history through markers that indicate who first occupied the building and who is occupying it now.

Two of the buildings made us curious enough to go inside. One was the Waldorf Astoria, a display of quiet elegance with the formal table setting of the Grand Brasserie and flowers everywhere in the Japanese style of Sogetsu Ikebana, according to my sister who is immersed in the art of arrangement. That moved us to take tea and pastries at the Salon.

Bund building 18’s bank lobby had a photo exhibit of the young Yves St. Laurent as he prepared for a show. It reminded us of our photo exhibit of Filipino food that also brought us to Shanghai.